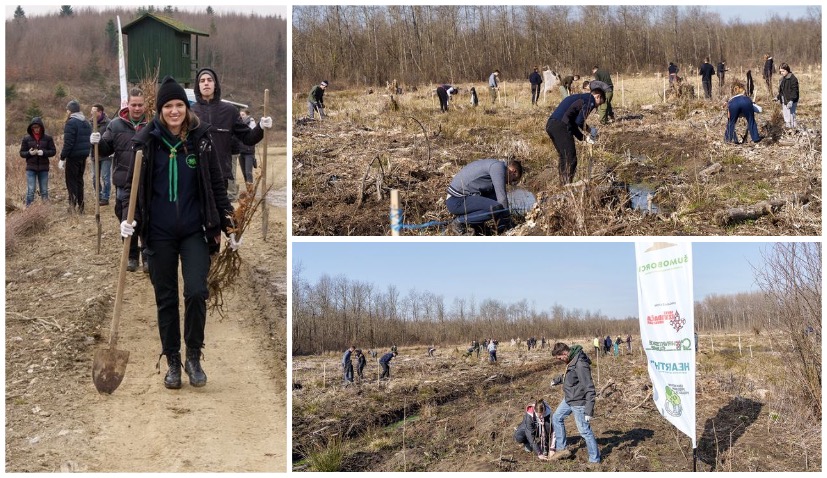 The Šumoborci (Forest fighters) campaign is a volunteer afforestation program that takes place as part of the CO2MPENSATING BY PLANTING project, the first Croatian program to neutralize carbon dioxide by planting trees.

The project is organised by the Croatian Scout Association, Croatian Forests and HEARTH as an innovative response to the effects of climate change.

It is the first of its kind in Croatia and the region and is intended for companies, institutions and other organizations, but also for all other interested parties who want to compensate for CO2 emissions by planting trees and neutralize their own carbon footprint and become a positive example of care for the environment and community.

As part of the project, in addition to afforestation actions involving scouts, primary and secondary school students, students and all other interested citizens, educational workshops are held in schools on climate change, the importance of forests and the environment.

The first afforestation campaign of the Croatian Scout Association started with Šumoborci volunteers at the end of last year, when in less than 2 months more than 1,500 Šumoborci members, with the help of Croatian Forests employees, planted 26,000 new seedlings in locations around Zagreb, Velika Gorica, Ivanić Grad and the island of Čiovo.

In addition to afforestation actions, 24 educational workshops were held in primary and secondary schools in cooperation with the Tatavaka Association, Croatian Forests and the Directorate of Civil Protection.

At the beginning of March 2022, the new season of the Šumoborci campaign began. In the Marča Forest near Kloštar Ivanić and in the forest near Draganić, young foresters have already planted over 8,000 new oak seedlings in the last week.

Draganićka forest is probably the best example of the negative effects of climate change on forests and nature where the parasite, the fungus Chalara, which is a new disease, has destroyed tens of thousands of field ash trees.

“Through the Šumoborci campaign, we enable children and young people, but also all others interested, to visit forests with the help of the forestry profession, learn about their importance, but also vulnerability and realize that climate change is present everywhere around us. By planting new seedlings together, we are helping to restore forests and create new forest stands that we will leave behind for generations to come,” said Dan Špicer, Business Director of the Croatian Scout Association.

Croatian Forests emphasizes that annually they plant over 9 million seedlings, but that every seedling that volunteers come to plant is extremely valuable because it helps raise awareness of the importance of forests and care for the environment.

The HEARTH agency, a co-organizer of the CO2MPENSATING BY PLANTING project, announced that activities this year will continue even more intensively with the aim of planting 80,000 seedlings at several locations in Croatia.

Afforestation actions will be accompanied by a creative information and media campaign aimed at raising awareness of the general public about the carbon footprint we create, the effects of climate change, the importance of environmental protection and sustainable development.

The project is sponsored by the US Embassy in Croatia, the European Parliament Office in Croatia and the Ministry of Economy and Sustainable Development. The technological sponsor of the project is GIS Cloud.

So far, 16 primary and secondary schools have joined the project, and as the project expands, it is planned to include additional business partners and schools throughout Croatia.

Already this week, afforestation actions are continuing with the help of hundreds of new Šumoborci and thousands of new planted seedlings.