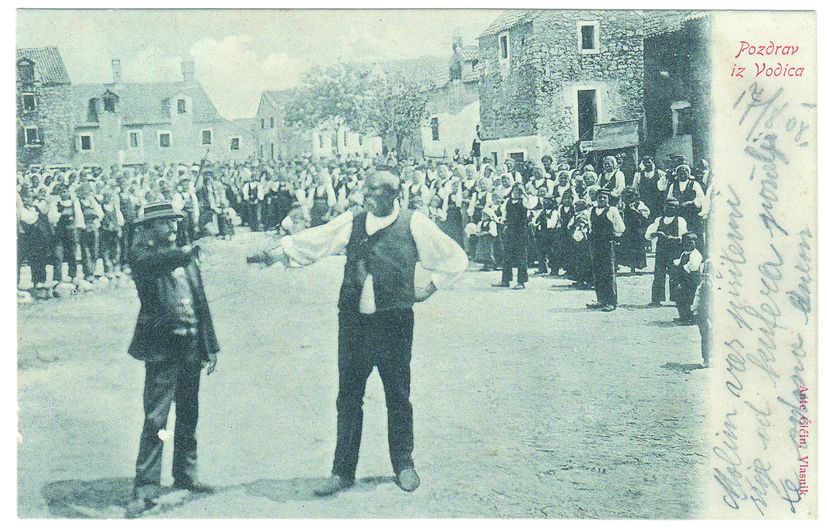 The largest monograph with old postcards published in Croatia, “Forgotten Dalmatia” by Igor Goleš, provides an authentic view of Dalmatia from the time back when photography first begun.

With almost 1000 pages, the hardcover luxury monograph shows 300 Dalmatian villages and cities in the period from the end of the 19th century until 1940. 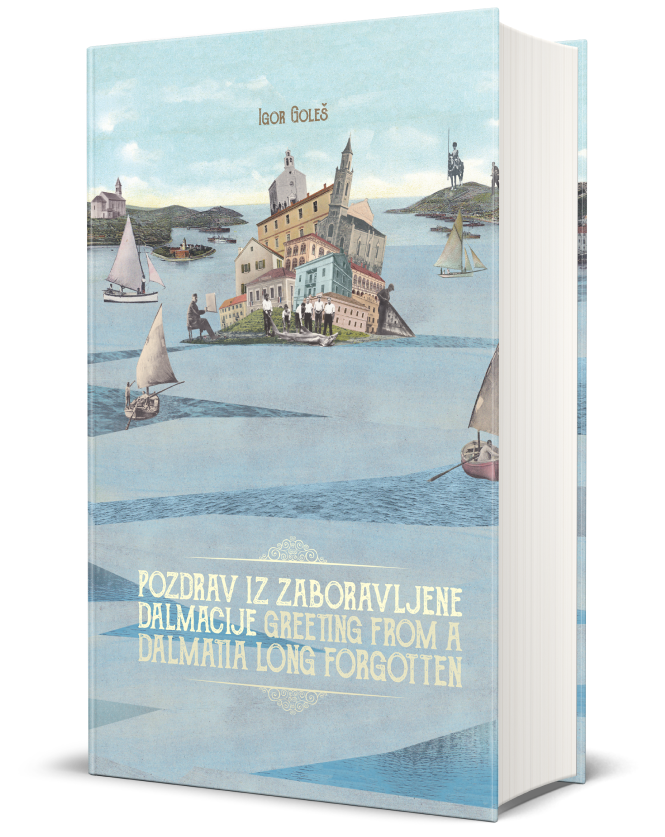 Greeting From a Dalmatia Long Forgotten

We asked the author, who is offering Croatia Week readers a 20% discount on the book (see below), for his selection of his favourite 7 old postcards from the book. 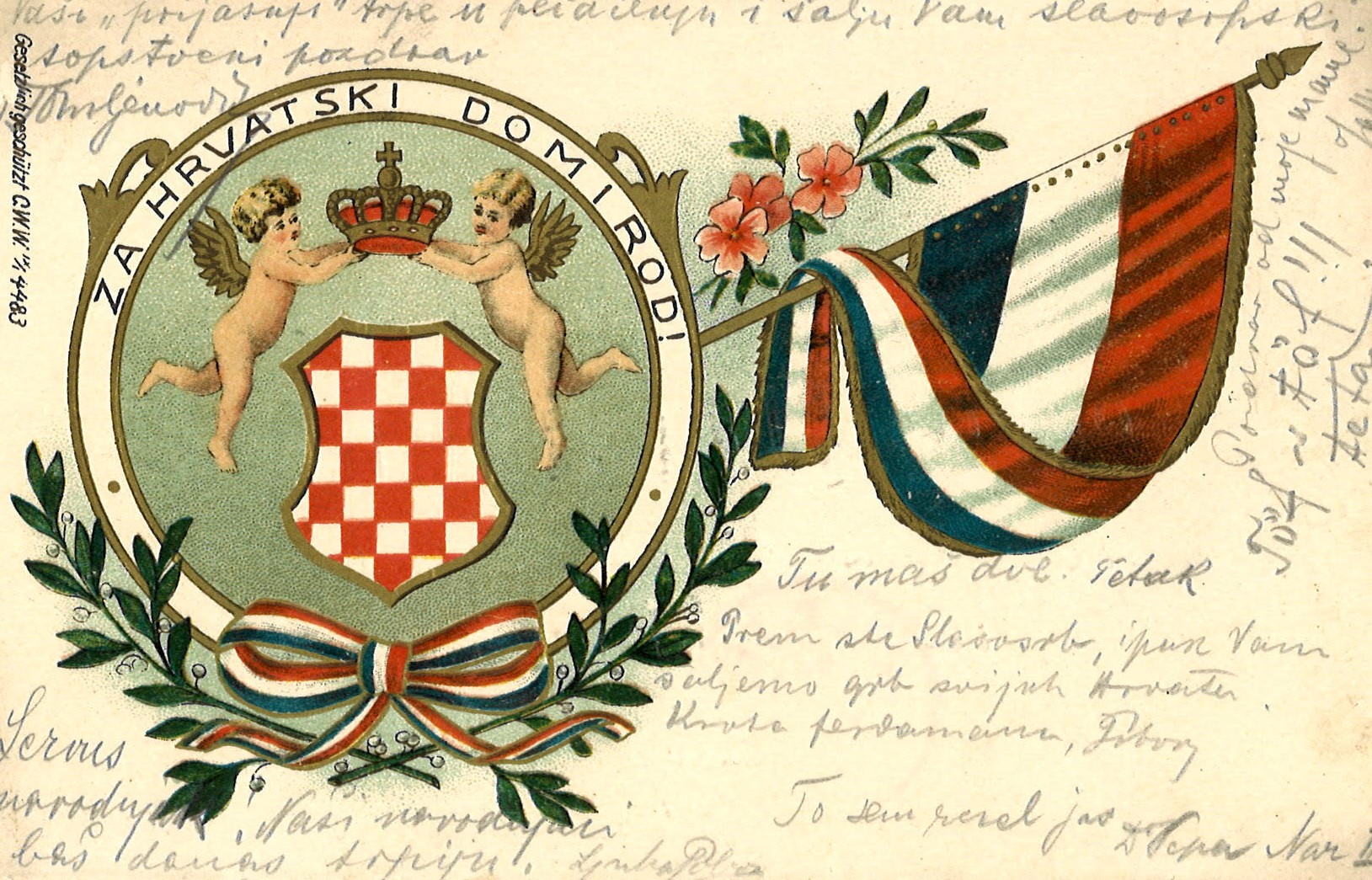 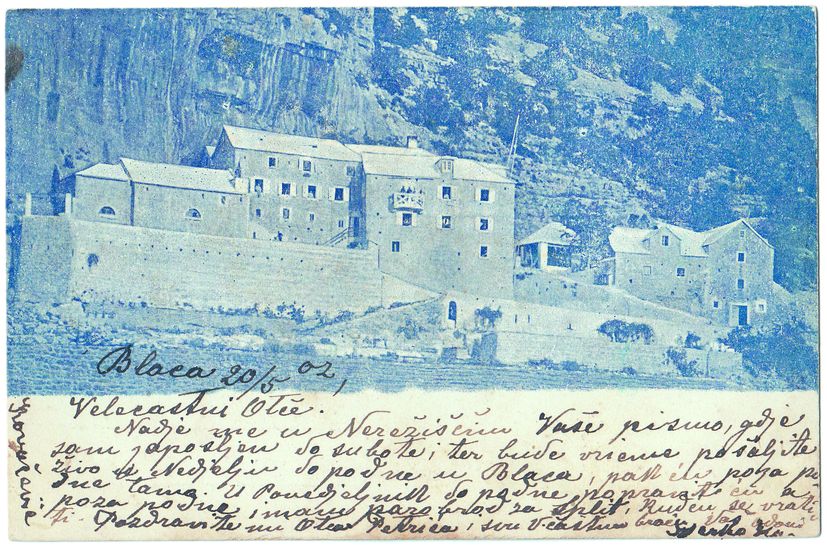 Inside the monastery there was a church, agricultural buildings, a school, a print house, an observatory and a scientific library. Especially significant is the work of don Niko Miličević Sr. After the great flood in 1896 he made a great effort to restore the monastery by building access pathways, a greenhouse with citrus fruit and a stone apiary. He also acquired a printing machine from Milan, started a print house and enriched the library with numerous titles.

Since the path leading up to the monastery is very steep and three kilometres long, and since the only way to reach the monastery is by foot or on donkeys, there is an especially interesting anecdote how a piano was brought into the monastery. The priests had to employ 12 farmers which took eight hours, but also 56 litres of sacramental wine, to carry the massive instrument from the nearby port to the monastery.

In 1920s Don Niko Miličević junior founded an observatory at the monastery, equipped with a library, instruments and telescopes. He made firm connections with eminent international astrology institutes, published his works in respectable scientific magazines, and in 1926 he even had a Brenner telescope, at that moment the most powerful in the region and delivered to Blaca. He left a rich astrology heritage which is today exhibited as a part of the museum collection of the monastery.

This popular game can be found throughout Dalmatia and Istria. It used to be forbidden for women to watch men playing the game. The game would often start spontaneously, after socialising in bars, when the game would be played in order to get a free drink, and it would gather a large number of observers, due to its anomaly and loudness during the game. In 1931 it was forbidden in Italy in public places because it was used for betting and it often led to quarrels and fights. 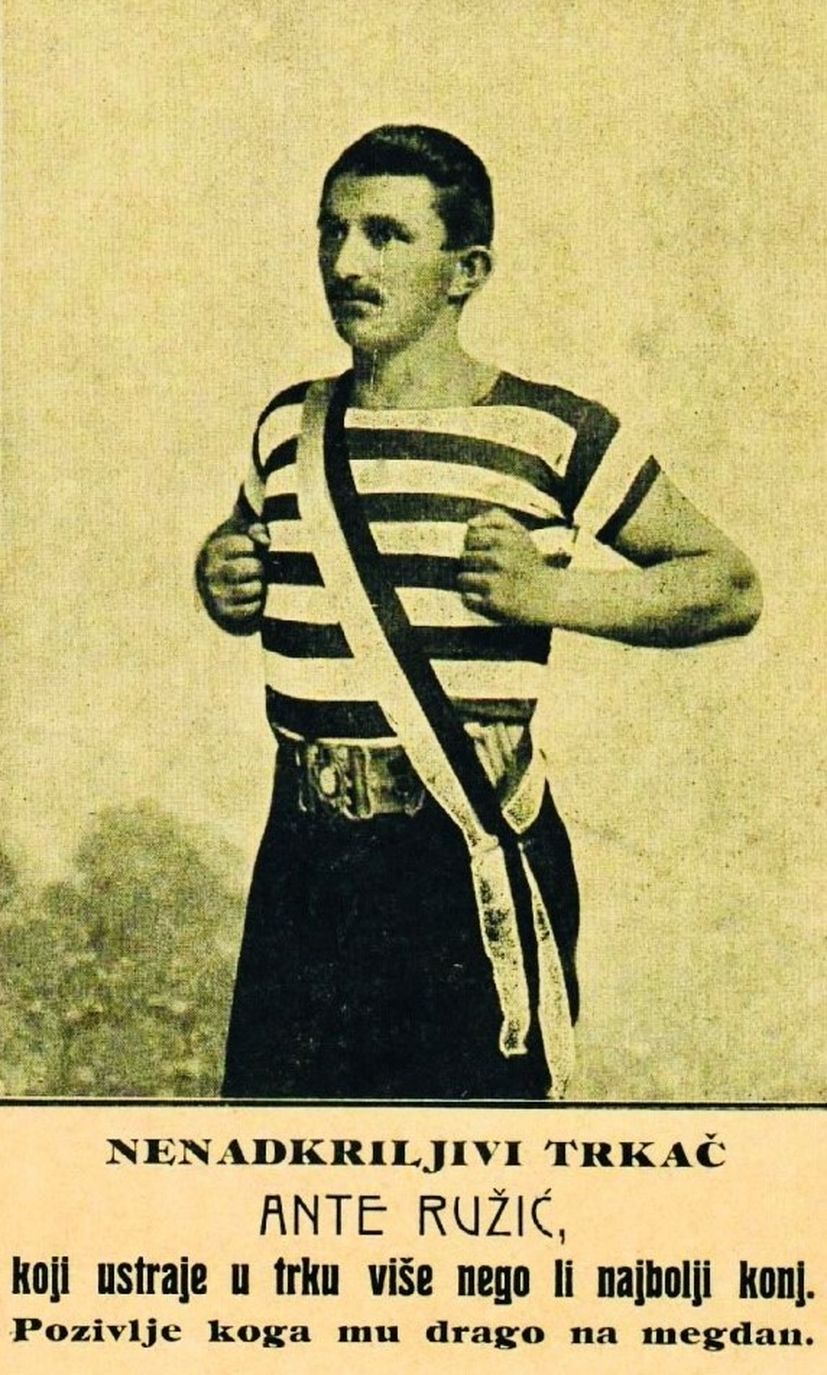 One of the greatest successes of this Split runner and maverick was when he outperformed the world record holder Dorando Pietri, who finished 42 kilometres in 2 hours and 44 minutes. On March 2nd 1921, Baćo ran 44 km in 2 hours and 38 minutes.

He had been training throughout Split, and once, while training, he ran 330 circles around the church of St. Francis. The most famous among his races happened on 27th September 1908, when he ran the entire section from Split to Klis 15 minutes faster than the locomotive for what he received a verification from the Klis railway station and mayor, and he was also awarded 200 crowns as alms for that undertaking.

5. 1908 – METKOVIĆ- DEPARTING FOR AMERICA AS EMIGRANTS 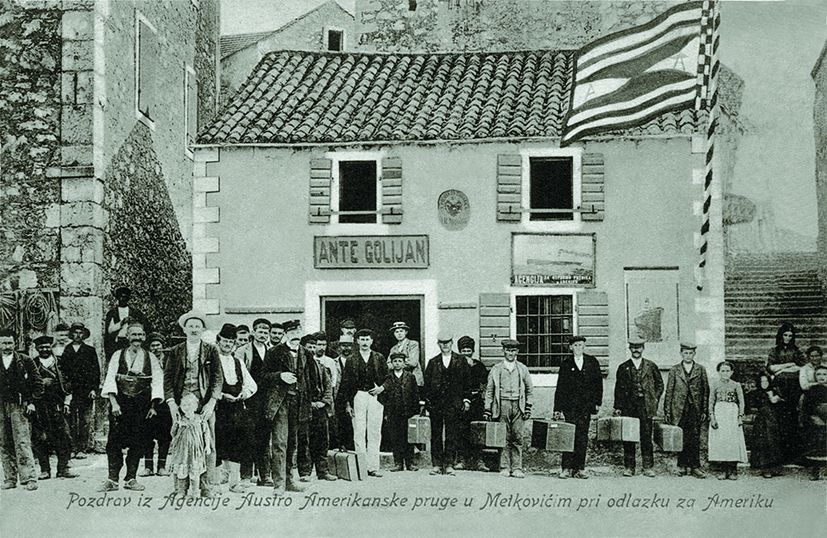 People leaving Metković for USA in 1908

The emigrants were transferred from these areas by two agencies from Metković, owned by Ante Golijan and Ivo Veraja. People remembered the Golijan’s one for the heaviness of partings, so memory of the agency is kept even in a folk poem: Bog ubija Antu Golijana što otprema preko ocejana (God kills Ante Golijan who ships across the ocean). 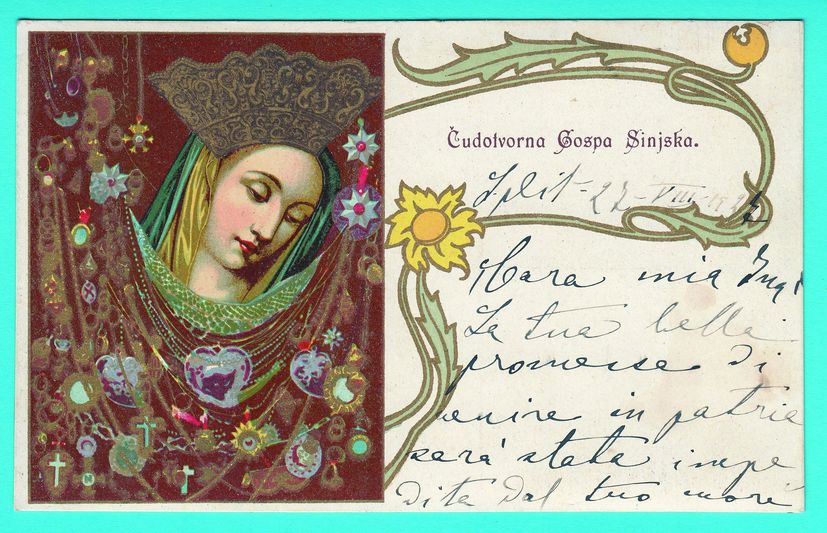 The legend on the patroness of the Cetina Region came into existence as a memory of the victory over Turks on 14th August 1715. It was then that 700 of brave Sinj soldiers managed to defend the city from the attack of 60.000 soldiers of Turkish serasker Mehmed-pasha Čelić. The painting of Our Lady was in the fortress where it had been transferred before the siege from the Franciscan Monastery below the city.

It is believed that it was the Mother of God who gave the strength and courage to the defenders of the city to endure during that siege. As an acknowledgement for the help, the Venetian Provveditore, together with his officers, gathered 80 ducats which were sent to Venice in order to be forged into a golden crown and a cross which were to be used to adorn the Lady’s figure. As a memory of this event and as an honour to the Lady, Sinjska alka takes place every year. This is a chivalric tournament in which riders ride horses at full gallop, trying to hit the centre of a small iron lance – alka.

7. 1914 – VRBOSKA – CHIEF EXECUTIVE OFFICER OF THE MUNICIPAL GOVERNMENT PAVIČIĆ WITH HIS GUESTS AND FRIENDS ON THE OCCASION OF 300th ANNIVERSARY OF ST. CROSS 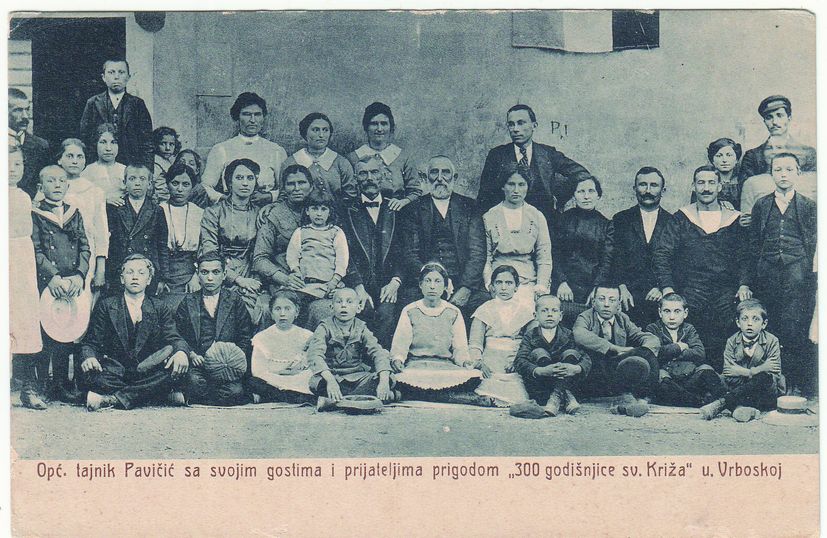 On 11th April 1614 the miraculous Holy Cross in Vrboska cried tears of blood because of disunion and intolerance of two groups of believers who were led by two opposed brotherhoods in their spats about becoming independent and separate from the Vrbanj parish.

Tears of the St Cross were recognised as God’s calling to warring sides for reconciliation and penance. From this day on this occurrence is celebrated in the entire parish, and Vrboska became a pilgrimage centre of the island Hvar. Postcards serial from 1914, photographed by Petar Ruljančić, through which he recorded the 300 th anniversary of this occurrence, is a Dalmatian deltiology classics.

You can purchase a copy of the book and get a 20% discount on the link HERE.