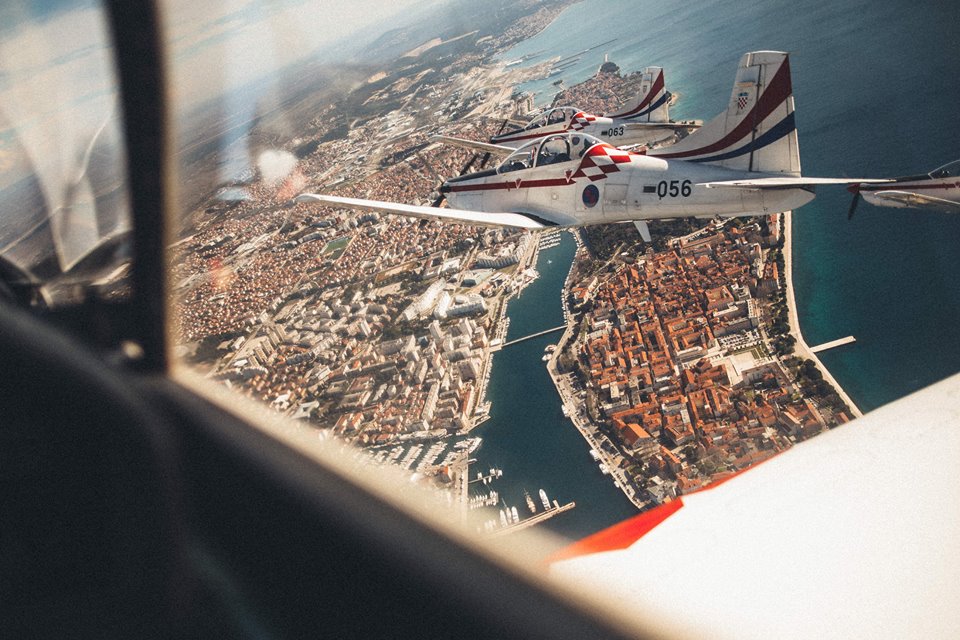 “You are about to see what 6g and -2g forces look like in training flight”, said captain Darko Belancic, head of The Wings of Storm aerobatic flight team and starts the ignition on his 950hp Pilatus PC9M turboprop plane to take off and fly in a five planes formation with other pilots of The Wings of Storm above Zadar, Croatia.

The Wings of Storm are an aerobatic flight team, part of Croatian Air Force and Air Defence.

The first flight of the team was at an aerobatic performance with a formation of four aircraft, during the opening ceremony of the European sailing championship in Zadar on 23 July 2004.

Unlike most other aerobatic flying teams, whose pilots only train to perform on various events, the primary mission of The Wings of Storm pilots is training future Croatian Air Force and Defence pilots.

On this flight, they took with them a camera from PIXSELL photo and video agency and landed with a fascinating 360-degree video of 20 minutes of flight time showing planes flying in close formation sometimes only 2 meters apart.

“On this flight, we performed 18 acrobatic elements” – Captain Belancic explains in a calm voice after landing. In case the viewer missed some of the action they can easily scroll back to the beginning of the video and have another look, this time watching what happens behind the plane, on the other wing or above the plane.

“That’s the real advantage of this style of video, not being fixed on looking in a single direction, but feeling as if you are sharing the seat with the pilot, looking around at what draws your attention but without having to endure six times the forces of gravity and loss of orientation. After landing you are just a click away from repeating the adventure, without feeling nauseous.” – said the author of the video, videographer Borna Filic.