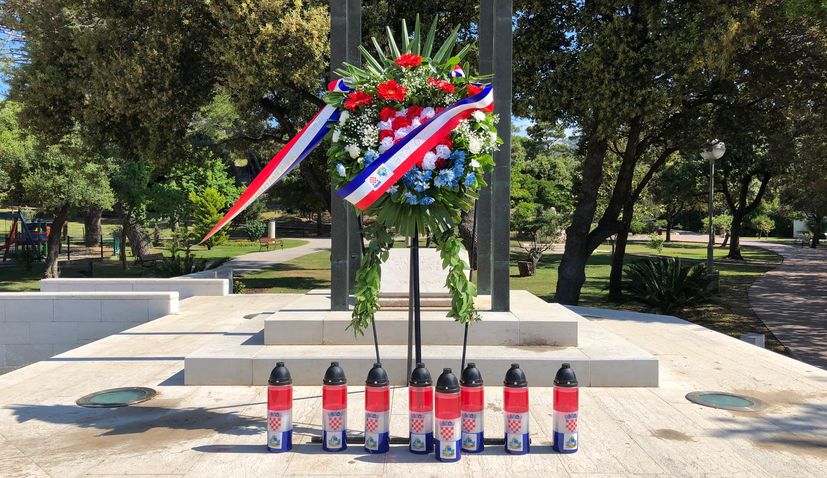 ZAGREB, May 30 (Hina) – The Croatian state leadership on Saturday laid wreaths at Zagreb’s Mirogoj cemetery on the occasion of Statehood Day, which as of this year is again observed on May 30 instead of June 25.

PM Plenkovic and Parliament Speaker Jandrokovic then laid a wreath at the grave of Croatia’s first president Franjo Tudjman without President Milanovic.

The wreath-laying ceremony marked the start of day-long events commemorating Statehood Day, as part of which a Holy Mass for the homeland will be served, a ceremony of changing the Guard of Honour will take place outside the government and parliament offices, and a concert will be held outside the Croatian National Theatre in Zagreb.

In 2020, after almost two decades, Croatia again celebrates Statehood Day on May 30, as it did in the first decade of its existence.

This year Statehood Day is celebrated on the 30th anniversary of the inauguration of the first multi-party parliament on 30 May 1990, when the foundations of the modern Croatian Parliament were laid and its historic role in preserving Croatian statehood was confirmed after decades of the Communist rule.

Prime Minister Andrej Plenkovic on Saturday issued a message for Statehood Day in which he stresses that “this year we celebrate Statehood Day again on May 30, the anniversary of the inauguration of the first democratically elected Croatian parliament.”

“We are marking the 30th anniversary of the beginning of the adoption of numerous crucial constitutional, legal, political and historical decisions which, in line with the will of the people expressed in the first multiparty election, led to Croatia’s independence, sovereignty and international recognition,” Plenkovic said, recalling first Croatian president Franjo Tudjman’s statement that the establishment of democratic freedoms and state sovereignty marked the beginning of the Croatian nation’s journey back to the European civilisational, political, cultural and economic traditions.

“One of the first and biggest obstacles on that path was the Great Serbian aggression which we successfully overcame owing to brave Croatian defenders and their sacrifice,” Plenkovic said.

Today, as a member of the European Union and western European civilisational circle, Croatia contributes to global security and stability and after only six and a half years of full membership, it was given the duty and honour to preside over the EU, the PM says.

“In the first three years of our term in office we have consolidated economic growth, continued with tax reliefs and structural reforms and restored Croatia’s credit rating to the investment level. We have increased employment and achieved respectable results in public finance, which has made it possible for us to more strongly and better deal with the global crisis caused by coronavirus,” Plenkovic said, noting that the government was controlling the epidemic owing to citizens’ responsible behaviour and its efficient measures, which was why the situation in Croatia was better than in many other countries.

“We are confident that with joint efforts and mutual respect in the new circumstances we will be able to successfully weather this crisis and to continue with reforms that will result in a life in dignity and better living standards for all our citizens,” PM Plenkovic said in his Statehood Day message.