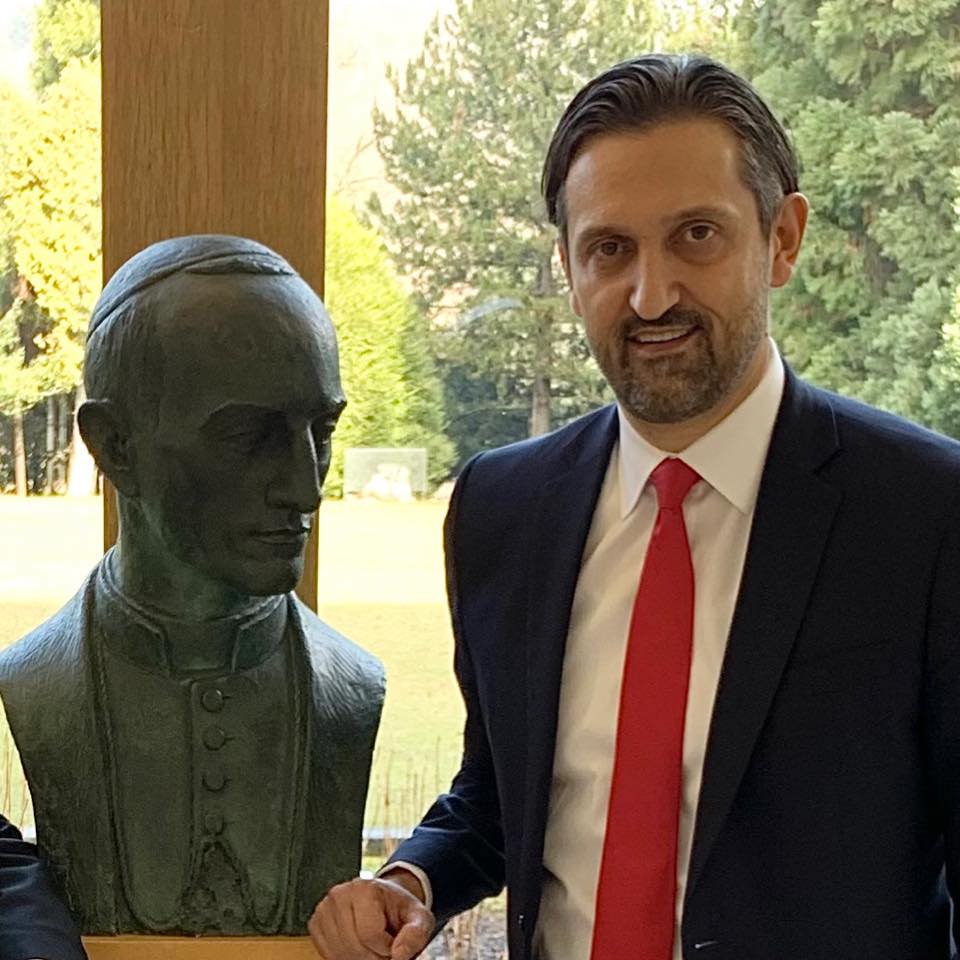 The fourth session of the second convocation of the Council of the Government of the Republic of Croatia for Croats Outside the Republic of Croatia was held on June 4 and 5, 2021 in five separate video meetings (including presentations and discussions on issues related to Croats in BiH, the Croatian national minorities, the Diaspora in Europe and the Diaspora overseas).

Dear Croats, a long year and a half has passed since our last meeting in Varaždin in November 2019: this period began with several difficult questions being raised at the beginning of our last session of the Government Council; a worldwide pandemic ensued and for which we postponed the Council session last autumn; soon after, Zagreb was hit by an earthquake; before the end of last year, earthquakes damaged and left a long-term mark on the Banovina region; and in between all of this, there was social turmoil around the world, not to mention the challenges we all face in our private lives.  This period gave us a lot of time to think – and an opportunity to ask many difficult questions.

I joined the Government Council for Croats Outside the Republic of Croatia with the best intentions back in 2013 (during the time when the Prime Minister was Zoran Milanović) and I undertook (and still undertake today) my role exclusively as a service to our Croatian people, aimed at the benefit of our Croatian diaspora, Croatian minorities in certain states, and the constituent Croatian people of Bosnia and Herzegovina;  and I recall my words to Prime Minister Andrej Plenković at the first session of the second convocation in Zagreb in 2017 that I actually did not want to be re-appointed as a member of the Council after a disappointing experience during the first convocation of the Council of the Government that did not bear fruit; at that same session, I was elected President of this advisory body and accepted the role because for me the experience during the session of the Council in Vukovar a year before, that is, in 2016, restored hope and positivity.  The English have a saying “Its the hope that kills you” – I hope it won’t be the case.

As members of the Council, most of us are not elected officials – but have been appointed to be the voices of Croats outside Croatia before the Government and the Central State Office – and I do not plan to give up the role of serving as a voice of my people.  We ask difficult questions, not to single out one person or group, but to help everyone here contribute to a vision and offer better solutions for today and the future.

What does Croatia need from its diaspora?  What does Croatia want from its diaspora?  Many wonder if it is just money, business contacts, or political relations – which the diaspora has managed to nurture and develop through hard work, perseverance and sheer determination because there was no other real alternative – because failure was not an option.  Although our parents instilled in us pride in being Croats, love for the Homeland, and a sense of community, they taught us by example that we must make an effort and fight for everything we want.

What does the diaspora want from Croatia?  What will the diaspora be ready to contribute to Croatia in the future?  A place to spend a vacation?  Somewhere to visit family?  An opportunity to cheer for The Fiery (the national football team)?  Or is there something more?  What is it that will attract my generation – the second generation – to be involved – among other things, in the political and social life of Croatia?  The goal of the first generation, which left the former Yugoslavia, was a free Croatia – and what is the goal of the second generation?

And people often forget that the issue of the diaspora is much broader because it also includes our people who left their homesteads after the creation of Croatia and especially during this last wave of departure.  What is it that will bring them back to their Homeland in Croatia because their roots are not as deep as the roots of those who left the Homeland decades ago or whose descendants were born in exile.  History repeats itself – and time is our greatest enemy – we need to look for the appropriate answers together.

Do we have a vision of the relationship between Croatia and its Diaspora for a period of say the next 5 years.  What do we want?  I welcome the initiative of the Central State Office for Croats outside the Republic of Croatia in preparing a national plan and vision for the development of relations between the Republic of Croatia and Croats outside Croatia for the period of 2021 to 2027 and I hope that it will bear fruit.  We recommend that the Central State Office include in the work of the expert group that will be drafting the proposed plan (which includes a long list of civil servants from Croatia) a broad spectrum of Croatian representatives from outside Croatia – we need people with a vision – so that the working group can work together to address difficult issues and define the social and political role of Croats outside Croatia – a model where Croats in the Homeland and abroad are unified. 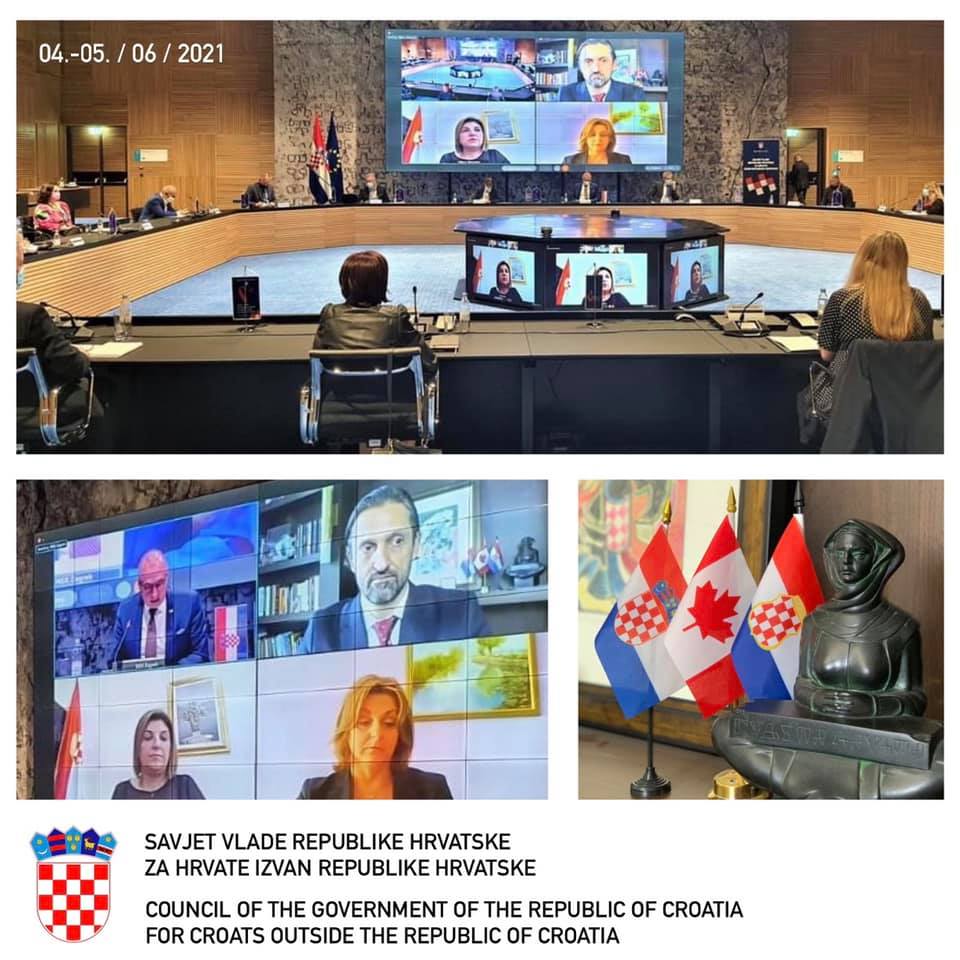 Unfortunately, unlike in previous years, the Croatian Prime Minister Andrej Plenković and the Croatian President Zoran Milanović were not able to attend this session of the Council, so we will present their pre-recorded video messages. As far as I understand it, due to technical challenges regarding the format of the meeting (held via  videoconference), Croatian Radiotelevision (HRT) was unable to broadcast the plenary session (as it had in years past).  We hope that the Croatian leaders will rejoin the work of the Council in the next convocation and that HRT will broadcast the plenary session next time when it is held live.

To make the work of the Government Council for Croats Abroad more effective, we suggest that in the future, similar working groups be created to deal with certain issues that are important to Croatia and Croats outside its borders because without communication, dialogue and more active work throughout the year from both sides and not only during the period before and during the annual session of the Council of the Government, there will be no significant progress on issues that have been open/unresolved for a long time.

As this is my last session as President of the Council, I would like to take this opportunity to express how proud I am of our people in Croatia and those outside Croatia who contributed in the aftermath of the tragedy and destruction caused by the earthquakes in Banovina.  At a time of tragedy, it is amazing how our people come together to help, each in their own way – and how compassion and a sense of community and unity are shown through deeds – not just words – reminding us of how Croats from all over the world united in a joint venture during the 1990s.  It is up to all of us to find ways how something more can unite us than, for example, football and tragedy.

Finally, I leave you with the words of Pope John Paul II, a great friend of the Croatian people – a man who had a great influence on Croatian independence and a special role in the international recognition of the Croatian state; who beatified Blessed Cardinal Alojzije Stepinac, Blessed Mary of the Prophet Jesus Petković and Blessed Ivan Merz, and during his pontificate he canonized two Croats: St.  Leopold Bogdan Mandić and St.  Marko Križevčanin: “Please – never, never lose hope, never doubt, never let up and never let yourself be discouraged. Don’t be afraid! ”

When I think of my parents (where and with what they started), their renunciation and sacrifice for their family, and everything they have managed to accomplish in life; and when I think of all those who fought and sacrificed in any way, and especially those who laid down their lives, for our Croatian people and for our Croatian homeland – how can we give up trying to contribute something more and something positive?

We will never give up on Croatia!

No surrender!  Thank you.