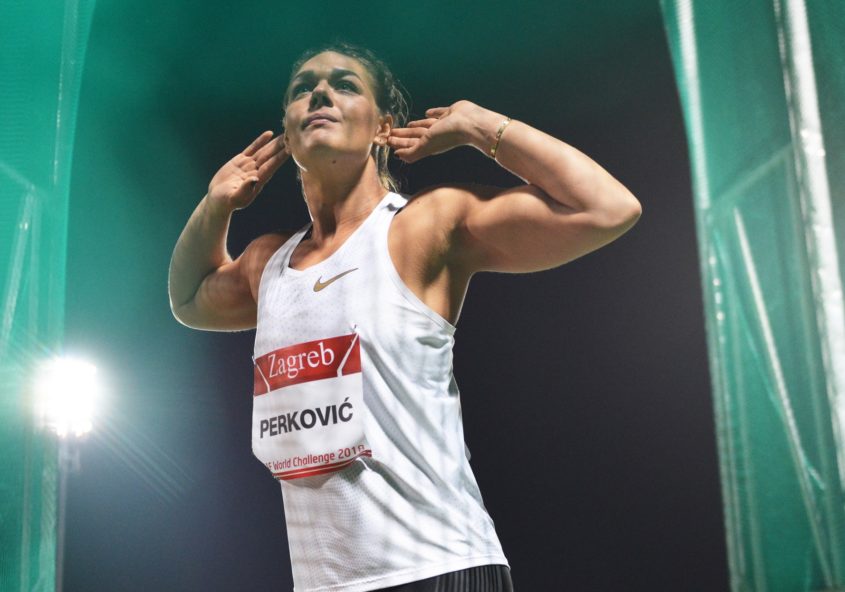 There have been five meeting records at the 68th edition of the Hanzekovic Memorial (IAAF World Challenge) in Zagreb on Tuesday night. Hometown hero Sandra Perkovic was also back to winning ways after the Diamond League finals.

Up against the two women who finished ahead of her in the Belgian capital – Yaime Perez and Brazil’s Andressa de Morais – multiple world, Olympic and European champion Perkovic took a convincing lead in the second round with 66.10m. She improved to 67.60m in round three which remained the best mark of the day and rounded out her series with throws of 65.80m and 64.43m.

Perez finished a distant second with a best of 64.78m with De Morais finishing fourth on this occasion.

“Of course I wasn’t happy with the defeat in Brussels, but I was sick there,” said Perkovic, who will represent Europe at this weekend’s Continental Cup. “I’m happy to win here and I always enjoy throwing at home.”

Croatia’s Sara Kolak, who won gold at the Rio Olympics, won the women’s javelin event, breaking the meeting record twice, first with a throw of 65.82 metres, then 66.42 metres.

Jamaica’s Fedrick Dacres was a similarly convincing winner of the men’s discus, one of five events in which a meeting record was set on Tuesday.

The Commonwealth and NACAC champion opened his series with 64.33m and was briefly overtaken towards the end of the third round by Austria’s Lukas Weisshaidinger, who threw 64.50m, but Dacres responded instantly with 65.11m to regain pole position.

Dacres improved to 65.21m with his next throw but saved his best for last, sending his discus out to 68.17m with the final attempt of the competition to break Lawrence Okoye’s meeting record from 2012.

After finishing second to fellow South African Ruswahl Samaai at the African Championships earlier in the season, world long jump champion Luvo Manyonga won’t be competing at the Continental Cup, so the Hanzekovic Memorial was his final competition of the year.

The IAAF Diamond League champion was determined to end his season on a high and he duly delivered. In the first round he sailed out to 8.46m, adding one centimetre to Irving Saladino’s meeting record from 2007, and then followed it with leaps of 8.25m, 8.45m and 8.30m. No one else in the field surpassed eight metres.

The European silver medallist had just one other athlete for company as the bar reached 5.56m, which Morgunov cleared on his first attempt. His opponent, Norway’s Sondre Guttormsen, bowed out at 5.71m, while Morgunov went on to clear 5.76m on his second attempt before retiring from the competition following a failure at 5.86m.

Nijel Amos hadn’t raced since winning the African 800m title one month ago in Asaba, but the middle-distance runner from Botswana showed no loss of form when winning in Zagreb. In a race where the top five men finished well inside the previous meeting record of 1:45.37, Amos was a comfortable winner in 1:44.08 from Poland’s Marcin Lewandowski (1:44.43).

The fifth meeting record of the night came in the women’s 3000m, where Kenya’s world cross-country bronze medallist Lilian Rengeruk won in 8:33.37 in a close finish from steeplechase specialist Norah Jeruto (8:33.61) and Ethiopia’s Gudaf Tsegay (8:33.78).