Many young (and in mid-life crisis) bikers all over Europe are now excitedly planning their biking holiday to Croatia this summer. How many will be killed on our coastal road this year?

When I visit Munich after a long stay in our holiday home in its splendid isolation, I lap up all the sounds of civilization again – the traffic, the airplanes and, I am ashamed to say, the sound of wailing ambulance sirens. If you live in a major urban centre, it’s hard to imagine a world without sirens. But you seldom hear one on the coastal road between Istria and Rijeka.

So, today, sitting in one of our favourite restaurants, Flanona, close to the end of this coastal road, I prick my ears to the unusual sounds of yes, a siren. Now anyone living, as we do, on the border between two counties – Istria and – Primorje Gorksi Kotar – knows that if you hear an ambulance, then the accident is close. That’s because ambulances from each county stop at the border (which happens to be exactly where we live.) So an ambulance siren usually brings out all the locals to see what has happened, as was the case today.

It was not a car accident (too early in the year), but instead, as we were told by an excited woman who drove into Flanona’s parking lot to announce the drama, it was an old man who had been looking for wild asparagus and slipped from quite high on to the road. I had seen an old woman just that morning also losing balance at the side of the road as she searched for asparagus. But asparagus-collecting accidents is not my topic today. It is the inevitability of accidents along this stretch of road in summer. 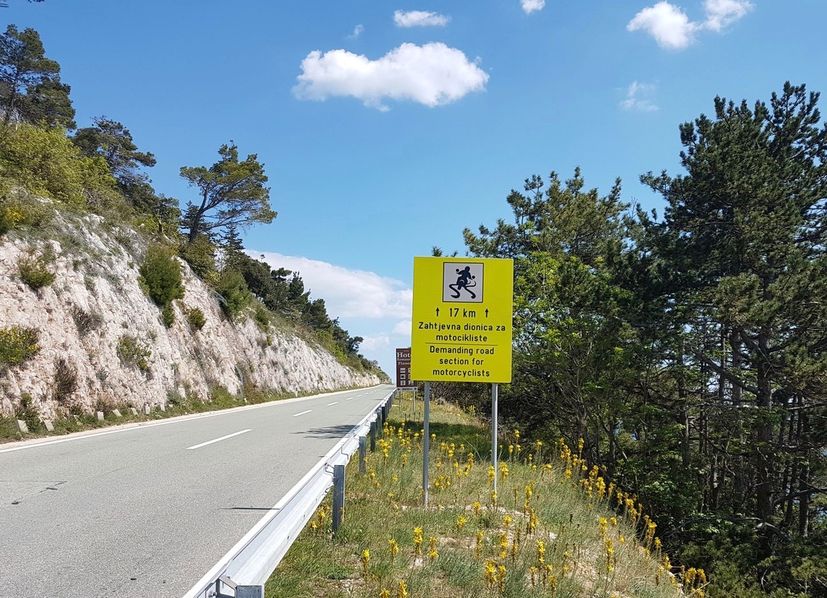 The worst are the motorbike accidents. In fact, just down the road from Flanona is a sign stating that the next stretch of road is “demanding for motorbikes”. I have often wanted to offer my English services for this one, because “demanding” can only be read as an exciting challenge for motorbikers. Better would be a skull and crossbones warning of the high accident rate. Only recently, not far from this sign, a young couple hit the barricade, flying over their bike and the barricade, tumbling to their deaths 40 metres down the mountainside.

We normally only hear ambulance sirens in summer when tourists arrive and, enjoying the coastal view, drive too slowly for local drivers. Then, two worlds collide. Because many Croatians drive as though the devil is after them. They overtake on curves. They overtake on solid lines. And if they cannot overtake at all, they drive right on your tail. I always warn my guests to drive as far to the right as possible because locals favour the wrong side of the road to master a curve. (Driving lesson from my neighbour: if you cut corners you can save your tires.)

Our former postwoman’s daughter, who my neighbour said always drove too fast (and that is saying something!), went over the cliff once. By a miracle, she survived, the car having been slowed by trees so that it did not end up in the sea. Our neighbouring mechanic’s son hauled her out with his pick-up truck. 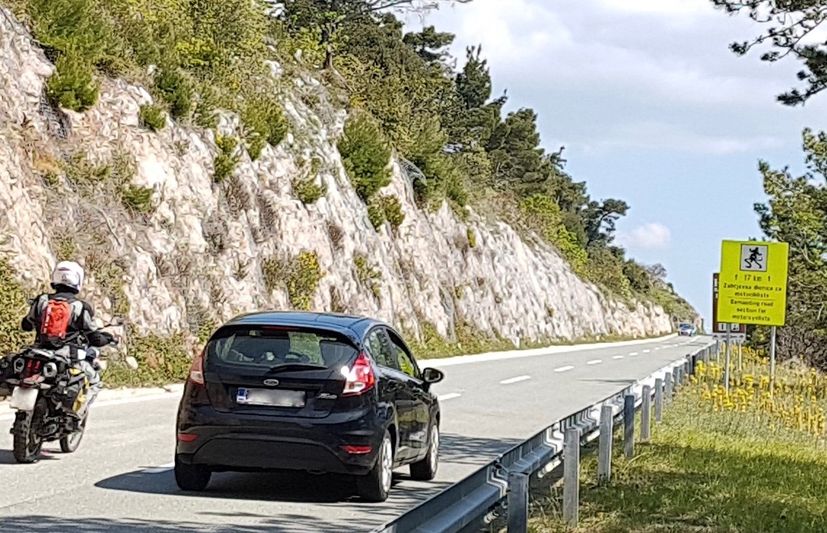 A tight squeeze – a biker overtakes a car in a narrow maneouvre (Photo: Private album)

But mostly, the accidents don’t have good endings. A few years ago, just below our house, a 19-year-old – the boyfriend of the daughter of the woman who owned the house next to us – drove his car at 170+ km/hour, lost control at the curve and hit an oncoming bus. He and his 24-year-old passenger were killed instantly. And yet, despite this terrible warning, we have one or two racing-driver wannabes, who regularly take the curves below us at testosterone-fed speeds.

Statistics show that motorbike accidents cause the worst road fatalities. Often it is because local riders take the curve on the wrong side. Twice, close to us, a group of local bikers driving on the wrong side of the road mowed into an oncoming group of foreign bikers. In one case, all lost their lives. The sight of their accident is now marked not only by the ubiquitous, eerily glowing red candles, but also by empty beer cans hanging from the trees. It makes me very sad every time I pass the spot. 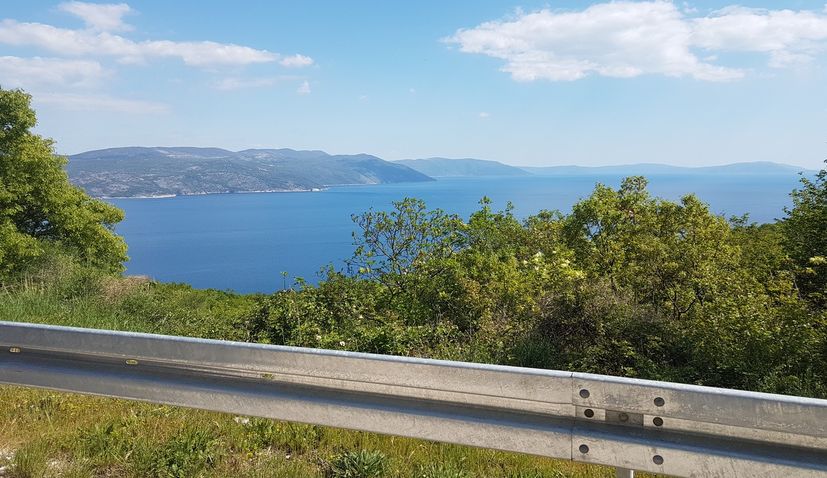 The view that slows tourists down (Photo: Private album)

And I ask myself, how many young men and women now excitedly planning their summer holiday in Croatia, will be killed on this road this year? Tourism is growing. The coastal road, with its treacherous curves and cliffs to the sea, is becoming more and more crowded. What about a simple awareness campaign? At the very least, a road safety campaign is needed about the importance of not overtaking when there is a solid line, or driving on the wrong side of the road. Or, at the very least, of slowing down in summer to protect foreigners not schooled in kamikaze driving.