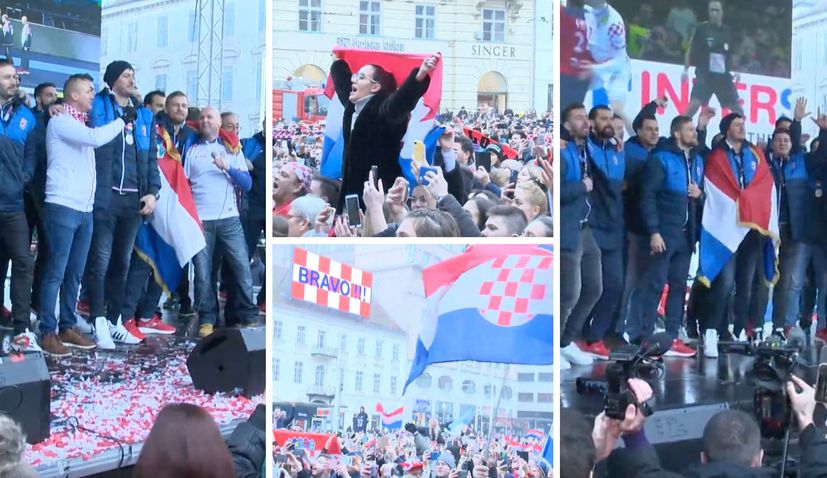 ZAGREB, 27 January 2020 – Croatia’s silver medal-winning handball team has been welcomed home by fans on the main square of the Croatian capital on Monday afternoon.

Over 500 fans turned up late on Sunday night at Zagreb Airport to congratulate the team when they landed and on Monday, more than 10,000 fans braved the cold and fog to converge on Trg Ban Jelacic with Croatian flags and scarfs to welcome home their silver medal heroes.

Yesterday, Croatia won their third silver medal at the European handball championships, after they won them in 2008 and 2010, when they went down 22-20 to Spain in the final.

Lino Cervar and the rest of the Croatia team, including captain and tournament MVP Domagoj Duvnjak, took to the main stage on the square at around 12:30 pm to large cheers.

“This medal is your medal. I’m sorry you had to get nervous, but God forbid you always get so nervous and we bring a medal home. We hope this is not the last welcome home like this,” Duvnjak said.

The team sang a number of songs on stage and the players had a chance to thank the fans who had turned up and supported them throughout the tournament.

“I’m proud of you, you were a big wind in our sails the whole tournament, I want to thank you. We were sad after the defeat, but when we see this, we are really overjoyed,” said Igor Karacic.

Croatia had an incredible tournament, only losing once to Spain in the final. One memory which will remain for a long time for the players and fans will be the dramatic, double extra-time victory over Norway in the semi-final.

The action from today’s welcome party in Zagreb below (courtesy of 24sata).