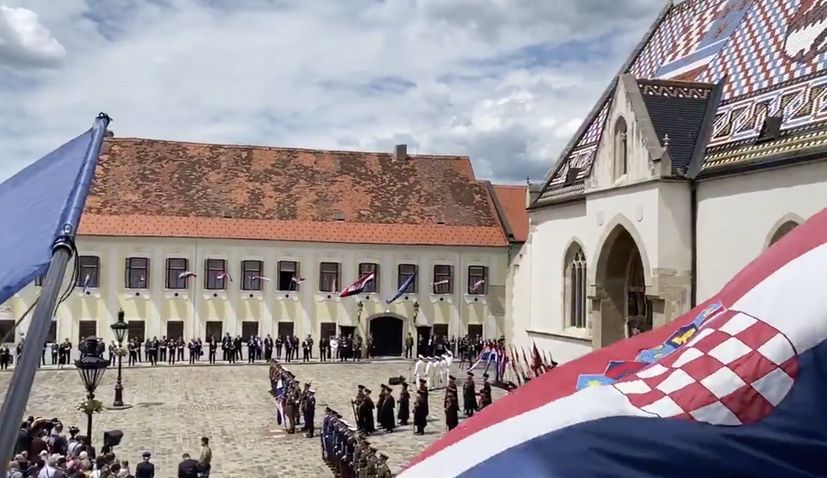 ZAGREB, May 30 (Hina) – Statehood Day, this year again celebrated on May 30, was marked on Saturday with a changing of the Honour Guard and a music programme in St Mark’s Square in Zagreb, in the presence of state officials, Prime Minister Andrej Plenkovic and Parliament Speaker Gordan Jandrokovic.

The ceremony was not attended by President Zoran Milanovic.

A programme was also performed by the Cravat Regiment, who promote Croatia as the country of the cravat and Zagreb as a city of the cravat.

The ceremony started at noon as two MiG aircraft flew over Zagreb and a salvo of 30 projectiles was fired from the Medvedgrad fortress, which was broadcast on a video wall in the square.

Members of the Croatian Army extended their best wishes to the spectators and citizens all over Croatia in a video message.

A minute of silence was observed for all those who gave their lives for an independent Croatia.

The commemoration of Statehood Day began this morning when the Croatian state leadership laid wreaths at Zagreb’s crematorium and Mirogoj Cemetery, and it will end tonight with a gala concert in front of the Croatian National Theatre.

Instead of on June 25, Croatia this year again celebrates Statehood Day on May 30, when 30 years ago the first multi-party parliament was inaugurated and the foundations of the modern Croatian parliament were laid and its historic role in preserving Croatian statehood was confirmed after decades of the Communist rule.