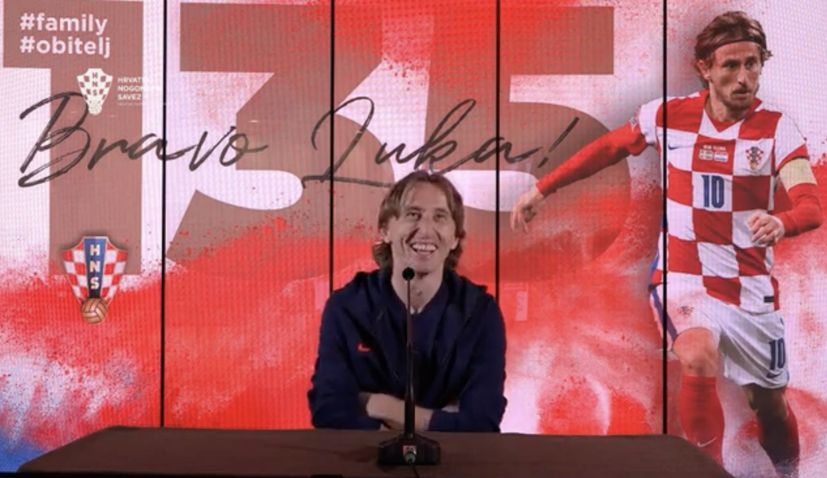 Luka Modrić turned up to the conference hall of the Milenij hotel in Opatija yesterday thinking that he would answer questions from Croatian journalists via Zoom after the victory over Cyprus.

He was surprised when they were not journalists asking the questions but his nearest and dearest.

The surprise was organised by Croatian Football Federation to honour the captain reaching 135 caps for his country, the most in Croatian football history.

Below are some highlights.

Luka, your dad Stipe greets you. Tell me, my son, what is your favourite goal for the national team?

“My favourite goal is the one against Argentina, because of everything we did at the World Cup in Russia and because of the importance of the match. Of course, all the national team goals are dear to me, but this one is more special than the others,” Luka replied.

Thank you, my son. Daddy loves you

I don’t think they recorded my recent performance in Petrinja (Croatia Legends v Slovenia Legends), it was my 135th!

“So, I have to play the next game, ha, ha, ha… And I’m still surprised that you went to Petrinja, ha, ha, ha… Now everything is clear to me,” Luka joked.

My little Luka, my love, brother… Congratulations from the bottom of my heart! I will ask you one question: What is the most difficult moment in your national team career? I think I know the answer…

“First of all, thank you brother for the kind words at the dinner after the game, to you and everyone else. You really touched me, and you know I’m not exactly for showing emotion, but I couldn’t help myself. And the most difficult moment is definitely the match against Turkey in the quarterfinals of the European Championship in 2008 in Vienna. We were hit by that defeat, it was hard for us, you know what our reactions were in the locker room and how hard it was for us. Whatever we did after that, that defeat was always there somewhere…”

First of all, to congratulate you and yours from the bottom of my heart on this magnificent success, it is phenomenal and just keep it up. As Wayne Rooney said when he someone retired from the English national team: ”What farewell, I will rest when I leave football.” I have two questions, it bothers me. So, apart from that song I wrote for Euro 2008, which song on the bus annoyed you the most, and which one was the best for you?

I said besides mine…

“Yeah. Honestly, none annoyed me personally, and I liked all the ones about Croatia. Yours wasn’t bad, ha, ha, ha…”

The second question is business: How are you with Chinese?

Congratulations from the bottom of my heart, to you and your loved ones who helped you achieve all this. I have to ask the first question because of our childhood picture you put in your book… Did you have prejudices in the sense that you are too small so you will not succeed? How did you deal with that?

“I had no prejudices. There were always comments when I started playing through my childhood, and even later in my career there were always some prejudices and doubts. However, this did not create any problem or aggravating circumstance for me. In fact, it only further motivated me to prove that people who talk like that are wrong.”

You proved it to them. And now a much more important question, to put together a team for the futsal tournament ‘Kutiju šibica’ from the players you played with and still a player in the national team… I’m listening.

“Uh… Five plus one, right? The goalkeeper would be Suba (Subašić), because he likes to play indoor soccer, and he is good at goal and in the game with his feet. I can’t put myself in, can I?”

You have to. You are unquestioned.

“Ha, ha, ha… So four more. The others would definitely be you. I would put Charlie (Ćorluka), we need someone in defense to hit, ha, ha, ha… Mateo Kovačić, I think he is good at indoor soccer and he also likes to play. And we need another one to score goals. Dudu (Eduardo da Silva)!”

We have similar thoughts. I would choose everything the same, except for the goalkeeper, I didn’t remember Suba, but I put  in Runja. And nothing, play at least fifty more games.

How? These qualifiers, European and World Cup.

First of all, thank you for including me in this magnificent six. Congratulations on this record to you and your family, we talked after Cyprus, you know everything. You know that you are my role model, you know how much your advice means to me, and every time I admire the will and desire with which you come to representative gatherings. In that context, my question is: Are you afraid of the day when you will no longer wear the holy jersey?

“Thank you, brother. Yes, I’m afraid. When I think about it, it will certainly be difficult for me, because I went through a lot in the national team. That moment will definitely be one of the hardest for me. It will be hard to make a decision to stop playing for the national team… So… Let me get uneasy thinking about it. However, one day that decision will have to happen. But good… While I have young men like you with me who rejuvenate me, there is still time, ha, ha, ha…”

Luka, congratulations! We know everything best, we’ve been through everything with you, all these fifteen years. I have a short question: Of all the teammates you played with in the national team, which one is your favourite in terms of football?

And the second question…

Do you know when you will stop playing?

“I see it’s not easy with you. I don’t know, love. We’ll see. You yourself know how much this means to me, how happy I am when I go to representative gatherings. So… You will have to be a little more patient. Anyway, there will be an opportunity to enjoy and be even more together. Don’t worry about it.”

So… I was the only one who asked two questions without getting an answer to either.

Good luck further, I hope we will watch and follow you for a while, enjoy. The most important thing is that we wish you a lot of health, and you have everything else.