Home » News » VIDEO: Lawyers for Generals Gotovina and Markač give overview of Operation Storm and the ICTY trials that followed 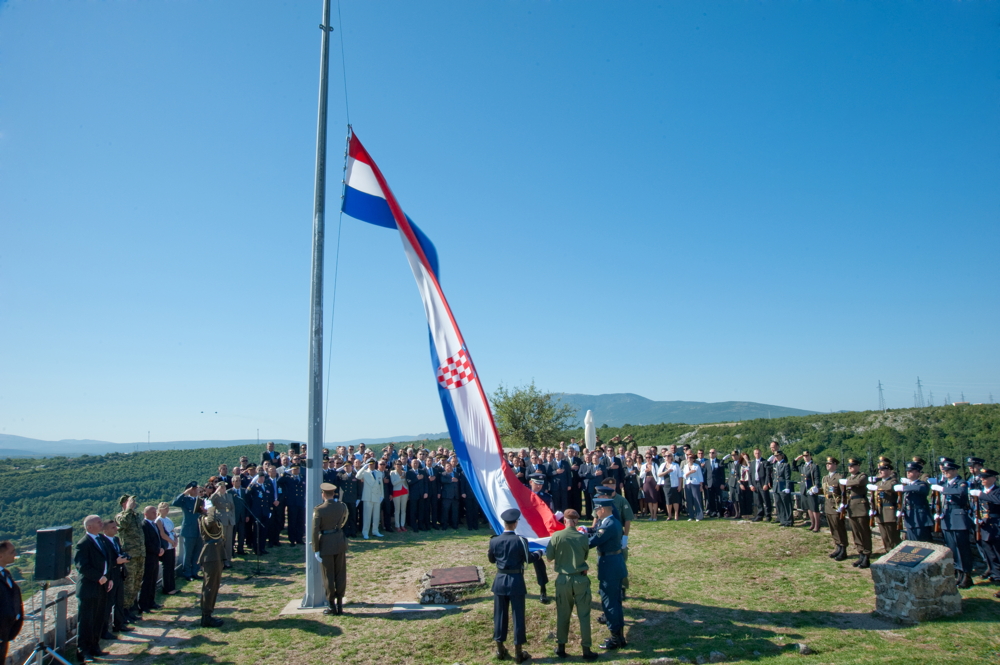 On August 4th, Crodiaspora held an exclusive webinar with people on the legal team involved in the trials of Generals Ante Gotovina and Mladen Markač. Ana Katalinić served as Defence Case Manager for Gotovina, and Tom Kuzmanović served as Defence Attorney for Markač.

Twenty-five years ago, the decisive battle of the Croatian War of Independence, known as Operation Storm, was fought in Knin. The operation liberated the self-proclaimed ‘Krajina’ region and its main city, Knin, which was held by Serbian rebels.

In 1995, Croatia took massive steps toward regaining full control of its land that had been occupied by Serb rebels. At that time, various UN peacekeeping stations had been set up in Croatia, as are shown below. UN Sector West was largely freed from Serb control in May 1995 by Operation Flash, while UN Sectors North and South were the focal point of the decisive Operation Storm in August 1995. UN Sector East, centering around Vukovar, was not liberated militarily but was handed over in 1998 after a three-year transitional period facilitated by the Erdut Agreement signed in November 1995.

Operation Storm, being the fulcrum, which shifted the war decisively into a Croatian success, was largely dictated by General Ante Gotovina and the Croatian Defence Council and other Croatian defence groups. Gotovina was able to maximize cooperative efforts with the military of Bosnia and Herzegovina by having his men take surrounding positions to Knin like Bosansko Grahovo, Gračac, and Glamoč in order to secure the liberation of Knin, which was the headquarters for local Serb rebels.

As well as these positioning maneuvers leading up to the liberation of Knin, Gotovina also took initiative in instructing a split between Sectors North and South. Another one of General Gotovina’s strategic highlights is his commandeering of his men in the Dinara mountain range – instructing that they hold the position and block any and all efforts by the Serb rebels to replenish or refigure themselves across the two sectors. Blocking these reinforcements ultimately proved to drain Serb support in both regions, allowing the window to retake the territories. 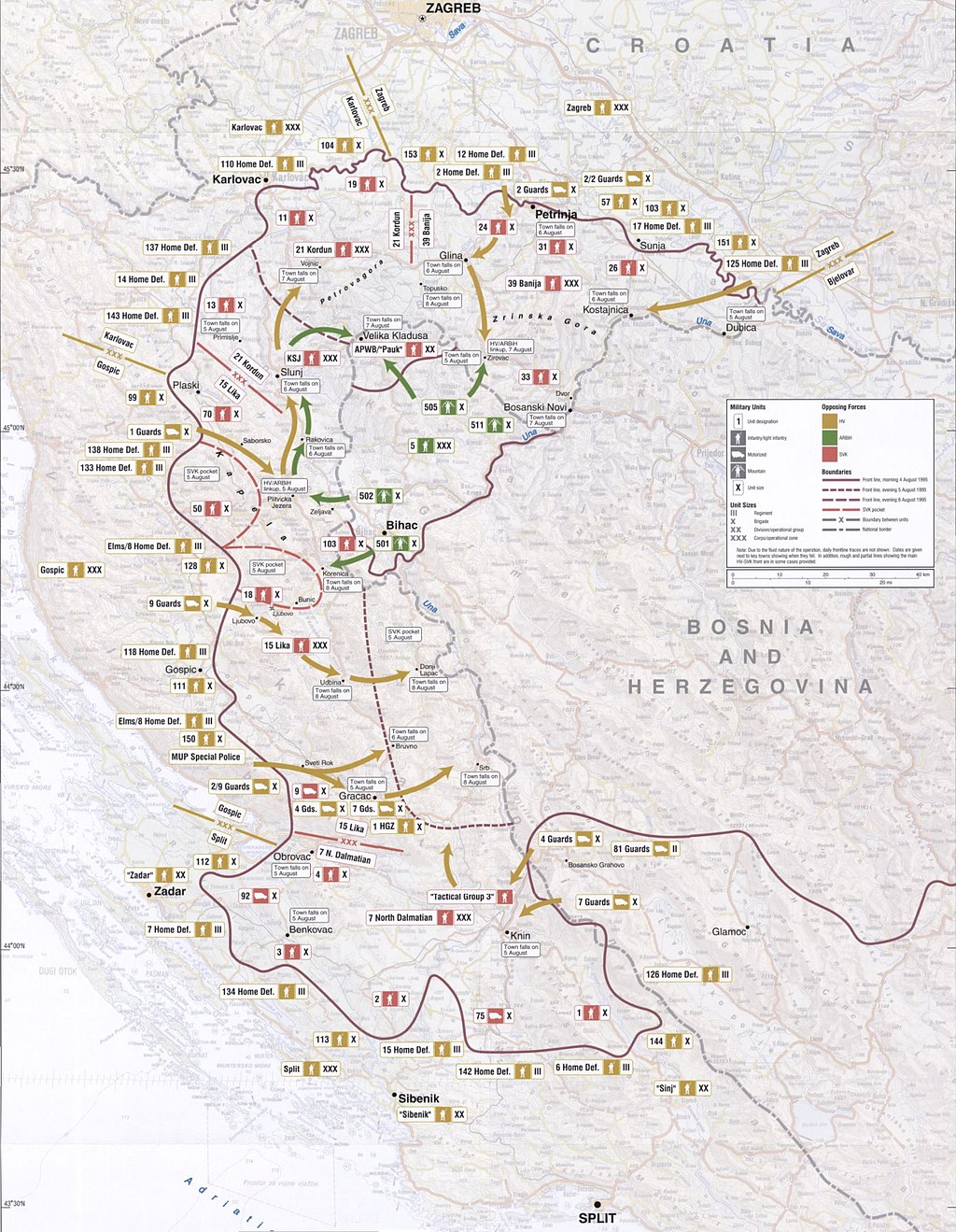 Mr. Kuzmanović outlines a report by Canadian Commander, General Forand of Sector South, where the General often criticized the Croatian forces and was skeptical of their military organization. Though Forand did at some points applaud the effectiveness of Croatian military operations, his lack of faith in them implies a clear partiality on his part in opposition to Croatian efforts.

In contrast, Kuzmanović shows the praise and support that Croatia has been awarded since independence by respected military leaders. In July 2017, then-Defence Minister of Croatia, and Major General during Operation Storm, Damir Krstičević visited the United States and met with then-Secretary of Defense and General, Jim Mattis, who served in the Gulf War, Afghanistan, and Iraq. Secretary Mattis said of Operation Storm, “Twenty-two years ago next month marks the anniversary of an Operation named Storm, an operation that is studied in the U.S. military to show what a well-led force, well trained, well equipped, and with good political guidance, how it can change the course of history. And we are honored to have you here today for your role in that operation.”

Despite regional controversies regarding Operation Storm, it is well recognized among some of the most respected military officials and institutions in the world – and that is something for Croats to celebrate and remember.

Looking at the trials of Gotovina and Markač, the ICTY prosecution took a broadly framed approach, essentially alleging a wide range of crimes from forced deportations to wanton destruction and murder, with the intention of dragging out the trial to see which of the allegations can be upheld on a factual basis, and the others would simply be dismissed.

The chief prosecutor of the ICTY at the time was Carla Del Ponte. Kuzmanović and Katalinić explain in the webinar that there have been many internal conversations among the parties involved in her trials that her personal views had interfered at least in part in the cases that she tried during her tenure. When General Gotovina had refused to voluntarily turn himself in, Del Ponte went so far as to accuse the Vatican of hiding him from capture. Top Croatian Catholic Associations have dismissed this claim consistently.

Especially of interest to those not too informed on the factual logistics of Operation Storm, Ana Katalinić clearly differentiates in the webinar between what did and did not happen during the operation. Some of the major issues to clarify are that Operation Storm did not include any blatant attacks on civilian population centers, there were no executions of assembled civilians, Croatians did not attempt ethnic cleansing in any way, and Croatian forces did not try to conquer the territories of any other nation. Lastly and most unequivocally, the Croatian forces did not by any means deport or force Serb civilians out of the ‘Krajina’ region – the mass exodus was out of free will.

Aside from liberating significant portions of Croatian territories, Operation Storm’s significance linked directly to the liberation of the Bihać enclave from Serb forces in Bosnia and Herzegovina. As shown below, Operation Storm pushed back to the true border between Croatia and Bosnia and Herzegovina, which then allowed Croatian forces the military pathways to flank the Bosnian town of Bihać and save it’s Muslim Bosniak population from a fate similar to the genocide in Srebrenica which took place just weeks before.

As the trials at the ICTY unravelled, it became relatively clear that the Trial Chamber’s prosecution factors were largely unfounded. The Appeals Chamber specifically took issue with a baseless claim by the Trial Chamber of a 200-metre rule with regards to the intentions of projectile warfare. The Trial Chamber claimed that projectiles that landed within a 200m radius of a valid artillery target were acceptable, but if they landed outside of that radius they were to be considered as an unlawful attack on civilians. With contradictory military perspectives to that rule, the Appeals Chamber deemed it baseless, which then largely collapsed the rest of the prosecution’s evidence.

Similarly, another basis for the prosecution’s claim of a Joint Criminal Enterprise did not hold up in the appeal. A foundational piece of evidence used to back this claim was a meeting that took place before Operation Storm on the Brijuni Islands between President Franjo Tuđman and his top military officials, including Gotovina. The meeting was manipulated in court to seem like proof of an organization framework of a suspected JCE, the product of which was to be the alleged unlawful shelling which had not abided by the 200-meter rule. Because both the 200-meter rule and the Brijuni meeting did not hold up on appeal, the result shifted in favor of the Croatian Generals.

Additionally, the ICTY could not find evidence of a single civilian that died due to the artillery shelling in question during Operation Storm, and there was not even a single Serbian civilian to testify that they were aware of any Serb civilians who fled due to fear of shelling during or in the aftermath of the operation. Instead, the Serb exodus was in large part organized on their own through Serbian officials advising local Serbs to leave the areas due to fear of further violence and conflict, and general fears of Croatian forces and distrust of Croatian authorities.

In the end, the Appeals Chamber ruled in favour of Generals Gotovina and Markač in a 3-2 decision, acquitting them of all charges.

The video is below.