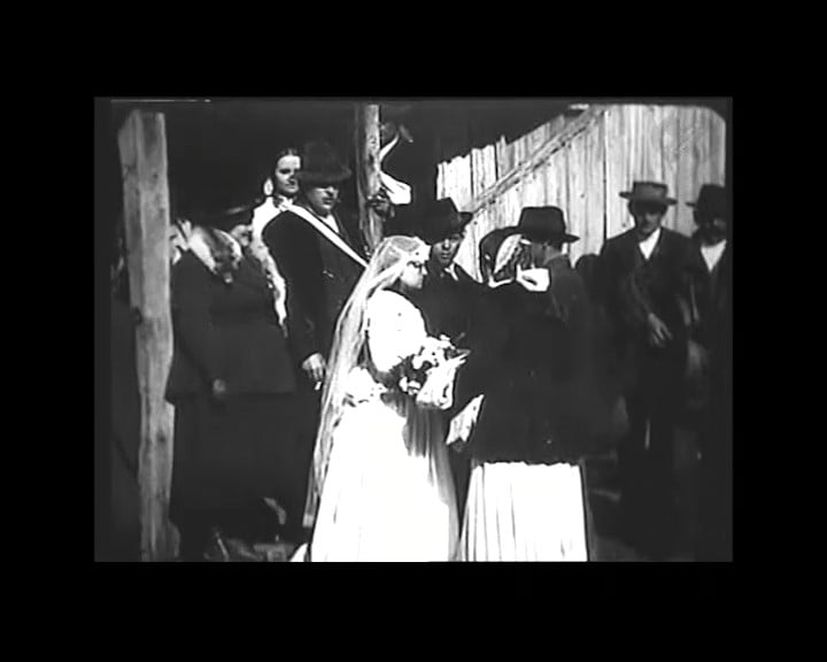 A 5-minute long documentary film titled “Seljačka svadba u Hrvatskoj” (Village wedding in Croatia) by Anatolij Bazarov filmed in 1922 in the villages Selišće and Greda near Sunja in the Sisak-Moslavina County gives an insight into how a traditional Croatian village wedding was celebrated a century ago.

The film was released by the Croatian State Archives (Hrvatski državni arhiv) as a part of the programme Croatian Film Heritage, aimed at promoting the Archives’ national film collection.

The film that gives us an unprecedented look into old Croatian wedding customs and life is divided into seven chapters.

Mlada preodjevena kao udata žena s poculjicom na glavi. Po običaju polijeva na bunaru kuma I djevera / The bride dressed as a married woman with poculjica on top of her head. Following a custom, she splashes water from the well on the best man and djevers (husband’s brother) heads

The documentary film is the oldest audiovisual record of traditional customs in rural Croatia that can be found in Croatian State Archives Cinematheque collections.

The film was produced as a part of a broader series called “Folk life and customs”, ordered by the Ethnographical Museum in Zagreb. Mr Vladimir Tkalčić, the then head of the museum gave the directions to the director Bazarov.

You can see the video below.

For more interesting archival footage you can visit the Facebook page of Croatian State Archives here.