30 May 2019 – Legendary Croatian fighter Mirko ‘Cro Cop’ Filipović has spoken candidly during a recent marathon 5-hour podcast, opening up about his recent stroke, his childhood days growing up in Vinkovci and revealing some humourous stories.

Cro Cop appeared this week on the popular podcast ‘Podcast Inkubator’ with Marko Petrak, telling a number of stories, including the time he cheekily stole Joe Rogan’s ride.

Cro Cop started by describing the famous UFC commentator, stand-up comedian and podcaster as ‘charming, eloquent and a bit of a rascal’.

“Since we are talking about Joe Rogan, I have to tell you a legendary prank,” Cro Cop began.

“I had a match in Cologne (Germany) in 2009 against Mostapha al-Turk.  We were put up in the Hyatt hotel. I finished my match, there were two matches after mine. I wanted to do my interviews and get out of there. We are 6-7 km away from the hotel but there was no transport. It was too far to walk back to the hotel. We had transport organised for after the event but I didn’t want to hang around as my crew and friends who came from Zagreb for the fight were waiting back at the hotel for me,” he continues.

“I can’t remember who was with me, but I come out of the main entrance, dressed in my tracksuit, and I see an S-Class (Mercedes) parked with UFC on it. The chauffeur, an older guy who looked like he had no idea, approached, I said ‘good evening’ and he said ‘you going to the hotel, are you Mr. Joe Rogan?’.  I said ‘yes, I’m Joe Rogan.’ He opened up the door to the car, I got in and said thank you and he drove me to the hotel,” Cro Cop recalled with a laugh.

That was not the end of it, once the car meant for Rogan dropped Cro Cop back at the hotel, the Croatian told him that his was not required again and sent him home for the night.

Cro Cop candidly spoke also about his childhood and the stroke that ended his career earlier this year.

“About a month, month and a half before my last fight (in Febraury v Nelson), I was driving my car in reverse, looking back over the seat, and after 6-7 seconds driving I felt like I was going to faint. I had to stop and it took me about 10 seconds to come to myself.”

This happened again the following so he went to the doctors for tests. For the next few days, Mirko says he had a tingling sensation on part of his head and then whilst he was in the gym doing neck rolls the stroke occurred.

“I rolled my neck ten times to one side, and then ten times to the other and then I just stopped, blacked out and fell down on my back,” Cro Cop recalled.

His teammates thought initially that he was playing a prank, which he says they often do at the gym. This time it was no joke and he was taken to hospital.

He has fully recovered and Cro Cop today trains fighters out of his gym in Zagreb, including new Croatian citizen Satoshi Ishii and conducts seminars around Europe. 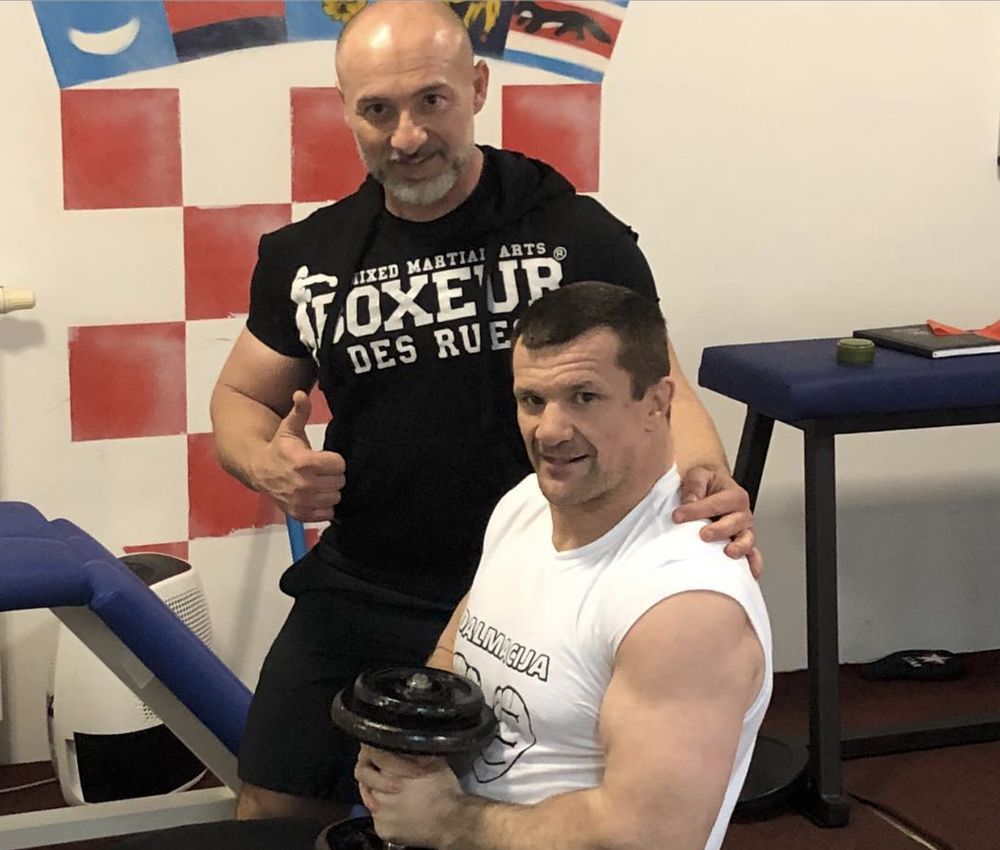 Cro Cop back training after the stroke (Photo Facebook)

Filipović will go down as one of the greatest heavyweights in kickboxing and mixed martial arts history. He was the 2006 Pride Open-Weight Grand Prix Champion and the 2012 K-1 World Grand Prix Champion becoming the second fighter in the world to win mixed martial arts and kickboxing championships and tournaments. He is also a former IGF Champion. He won his last 10 fights in a row and ended his career with victory over Nelson.

You can see the podcast below (in Croatian).