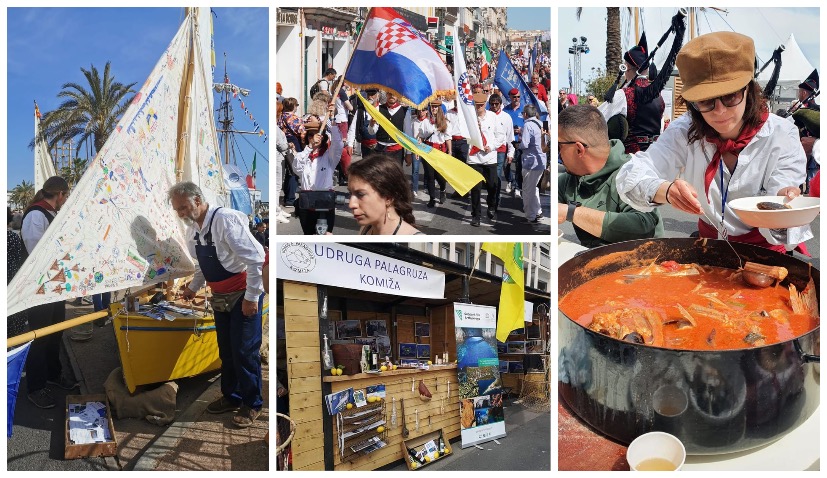 APRIL 25, 2022 (HINA) – At the festival ‘Escale à Sète’, in the south of France, the Komiža fishing house was rebuilt last week and visitors could take part in building traditional boats, taste gastronomic specialties of the island of Vis and listen to Dalmatian klapa (a capella) songs.

Komižan barrack, a fishing house that was used for salting fish, now serves for presenting maritime heritage. The Palagruza Association organised boat building workshops for the young visitors of the festival, to be precise children had the opportunity to build a traditional ‘gundula’, a small boat that was used for rowing on the nearby beaches of Komiža bay.

With the help of members of the association, the children drew the parts of the boat in the making, signed them and sawed with expert guidance. 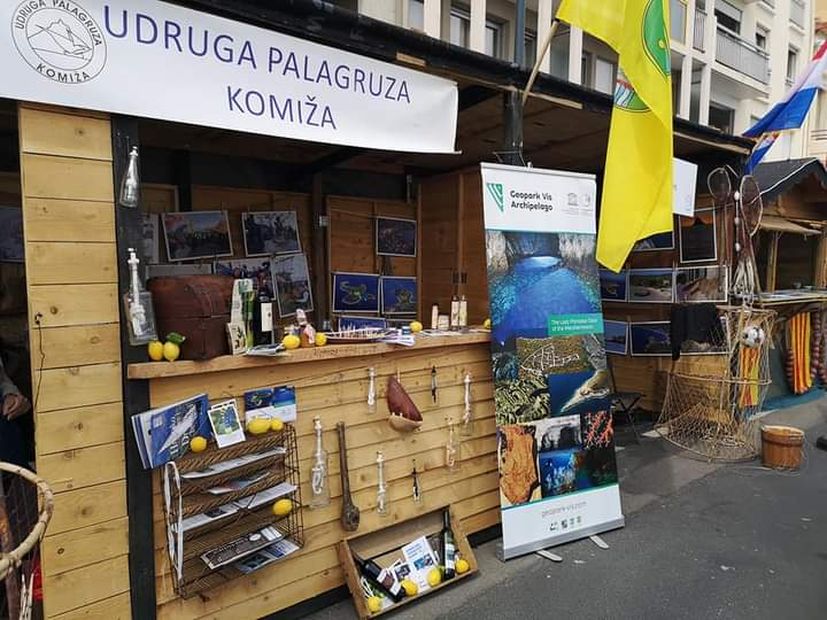 Visitors could also see the already finished Komiža gundulas, ‘Jurkovica’ and ‘Lucica’, one of which sailed alongside the moored sailboats.

Komiža sandula ‘Molo Palagruza’, a flat-bottomed fishing boat used for fishing at the nearby Komiža fishing spots, received a new sail in Sète , also designed by children as part of the international project ‘Paint a future’, which encourages them to express their vision of the world. 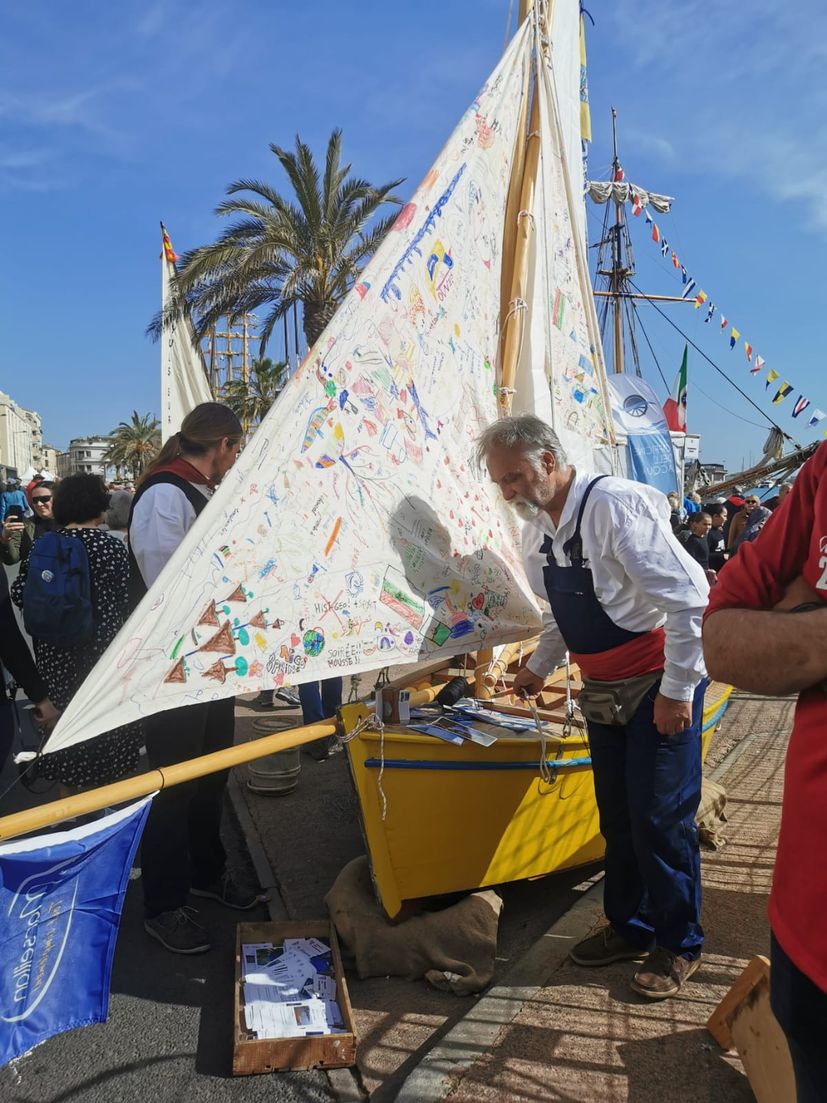 The ‘Escale à Sète’ festival is the largest mediterranean maritime heritage festival held in the city of Sète, gathering about 300,000 visitors, more than a hundred traditional ships, including the world’s largest sailing ships, about fifty music groups and hundreds of exhibitors, and on top of all that nearby tourist boards organise trips to Sète during the festival for thousands of visitors.

After the pandemic break, Croatian maritime heritage was again presented at this international festival by Komiža associations Palagruza and Geopark Vis Archipelago, Cronaves from Split and the crew of gajeta ‘Mila’ from the island of Prvić.

“This festival is important for our association because in addition to supporting the Croatian Tourist Board, we renewed our partnerships and created new contacts for cooperation with associations across the EU working in the field of maritime heritage preservation,” said Miro Cvitković, the president of Palagruza Association. 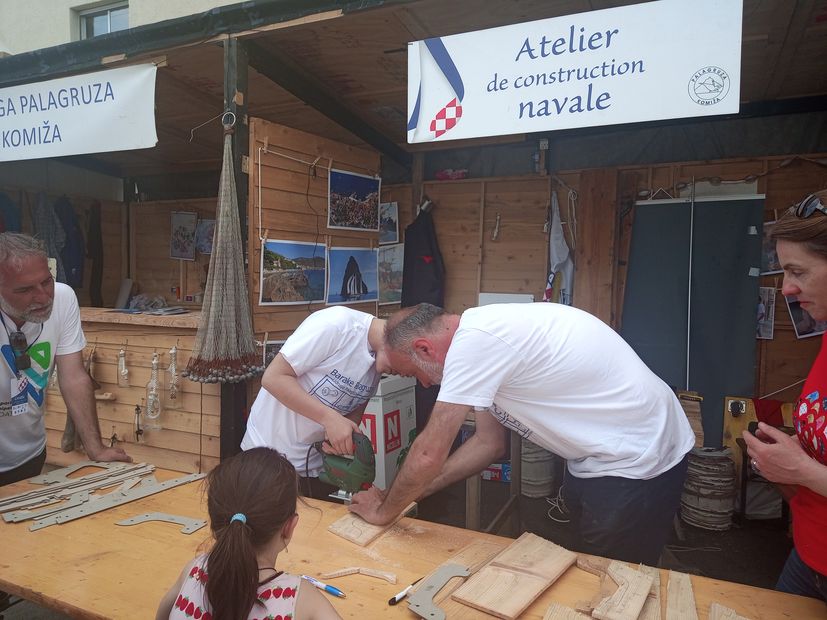 “We will continue to build gundula at festivals throughout the year,” announced Cvitković, adding that “although the festival’s emphasis is on large sailing ships, we have managed to attract visitors with the smallest boats, which are most suitable for working with children.”

In addition to shipbuilding workshops, the ‘Palagruza Association’ also presented traditional gastronomy to visitors. In the Komižan barrack you could taste brujet, Komižan pogača (bread), roasted sardines and mackerel, and for Easter lamb with peas.

“Many people were attracted by the smell of cooking, so they came to ask me what I was cooking and when it would be done for tasting,” said the Palagruza head chef Mate Stanojevic-Maltez to Hina, adding that people would ask for recipes of traditional Dalmatian specialties after tasting.

In Komiža barrack, dried tabinja, a fish from the cod family was also prepared. It is prepared in a similar way as cod, except that it is enough to soak it only a few hours before preparing the dish. Tabinja needs to be kept in salt (brine) for three days, then dried for a few weeks, this was done before the festival by the fisherman Damir Karuza – Kalambera and then he prepared this special in Sète. 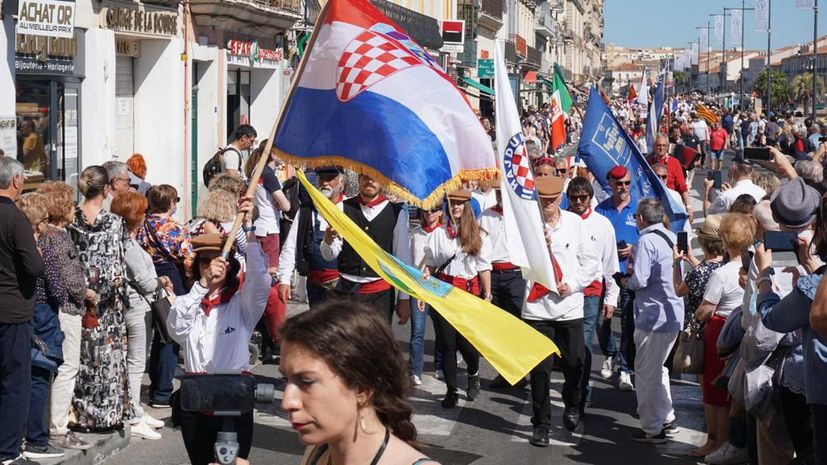 Traditional products of island of Vis were also presented through the GEOfood program implemented by the UNESCO Geopark Vis Archipelago. “I am proud of the response of the producers from the island of Vis, the visitors were delighted with our local products,” Geopark director Lana Schmidt told Hina.

Among other products with the GEOfood label, at the festival were also presented the products of students of the high school ‘Antun Matijašević Karamaneo’, “since the Palagruza Association and our Geopark are focused on working with young people, I especially praise our students who put great effort into preparing their own products made from carob” Schmidt said.

The Komiža barrack was also an exhibition space for photographs, knots and antique fishing tools. Photographer Boris Kragić presented his exhibition ‘Archipelago of the Island of Vis’, photographs by Velimir Bešić were also on display, and knots in bottles by Damir Višić aroused great interest.

A special tone that rounded this Dalmatian story was given by the a capella group ‘Kaštelanski pivači’, which in cooperation with the Palagruza association was a guest at several festivals, and for the ‘Escale à Sète’ they received a personal invitation from the festival director after hearing their performance on island of Hvar. “We had two to three performances a day in Sète these days, and we performed on all stages of the festival,” group member Ivan Cinotti told Hina.

Klapa singing could also be heard during the parade of all festival participants. Saturday’s parade was the highlight of the festival, with groups of participants dressed in traditional costumes passing through the city, playing traditional instruments and singing traditional tunes and carrying their flags. 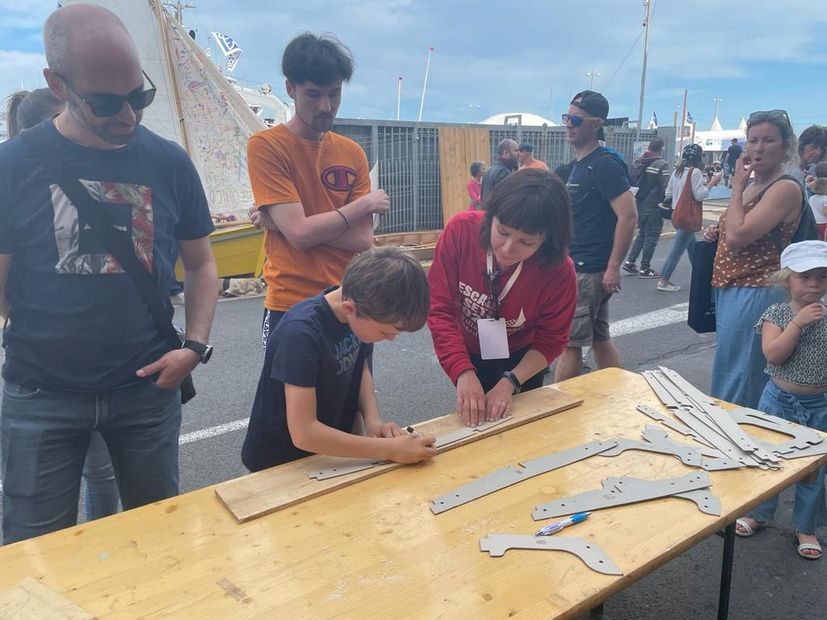 ‘Paint a future’ project was started by Dutch artist Hetty Van der Linden, who encourages children to imagine a brush as a magic wand that can make all their dreams come true. The realization of children’s dreams is then helped by artists who include children’s works created as part of the project in their works of art, and after selling them, they direct the money to fulfill the wishes of children in need.