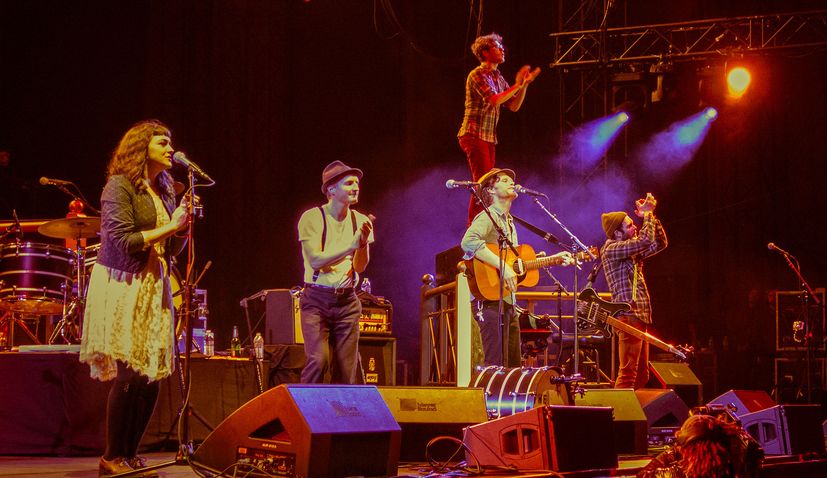 The Lumineers gained worldwide attention with their breakthrough single “”Ho Hey”, seemingly appearing out of nowhere and on the heels of the Americana and folk revival of the early 2010s.

In reality, Wesley Schultz and Jeremiah Fraites, the duo behind the minimalist and effortlessly catchy melodies synonymous with The Lumineers, have been making music together and struggling for a piece of the spotlight for seven years before their well deserved breakthrough album and single released in 2012.

Two Grammy nominations, two studio album releases, and a slew of sold out shows across the globe later, The Lumineers have proved so much more than a one hit wonder band. With musical influences in American contemporary classics including Bob Dylan, Tom Petty, Bruce Springsteen, and even Talking Heads, and a firm assurance in their refined melodies and emotiveness that channel their music, The Lumineers are rightfully considered a new musical voice whose body of work rests on a stripped back and honest approach in sharing important and personal stories with their audience.

The band’s passion and integrity is best displayed in their live performances which makes them one of the most successful US live artists, and a coveted live act on festival stages around the world, from Glastonbury, Coachella, Fuji Rock and Lolapalooza, to name just a few.

The Lumineers will join The Killers, Beck and Deftones at the upcoming 15th edition of INmusic festival which will take place at Zagreb’s lake Jarun from June 22nd to June 24th, 2020. Three day tickets for INmusic festival #15 are available via the official festival webshop for just 70 EUR, as well as 7-day festival camping tickets for just 35 EUR.