Last week Stipe’s father Bojan said he would be keen to see his son fight in his homeland.

“I will send a message to Dana White (UFC President), suggesting that my son defend the belt at Poljud stadium in front of 50,000 people so they can see who a real champion is,” Bojan said.

Speaking to daily Vecernji list, Stipe says that he would love for it to become a reality.

“That sounds very good. I would love that. But if it happens or not you have to ask UFC. I would love to experience 40,000 of my fans supporting me,” Stipe said.

Stipe at Poljud stadium, home of Hajduk Split, with his father Bojan (Facebook)

Despite creating UFC history with his win over Francis Ngannou this month, Stipe remains the same humble champion he has always been and was about to return back to his day job as a fireman.

“I hope my boys don’t overload me with work, but nothing will change and I will probably have to clean the toilets again,” he joked.

Stipe is also a fierce family man and straight after his fights, the first person that he gets in contact with is his mother Kathy.

“I usually call her soon as I get into the dressing room. This is a dangerous sport and that is why she does not watch my fights but waits till I call or someone else calls her to tell her how I got on. She is always worried about me.”

Stipe says he hopes soon to be able to take his mother with him to Croatia.

“I don’t think mum has been to Croatia since she left there as a kid so it’s my big wish to take her to her hometown of Cetingrad. We discussed it and she wants to go,” Stipe said.

Miocic has been to Croatia four times before and is planning a fifth visit. 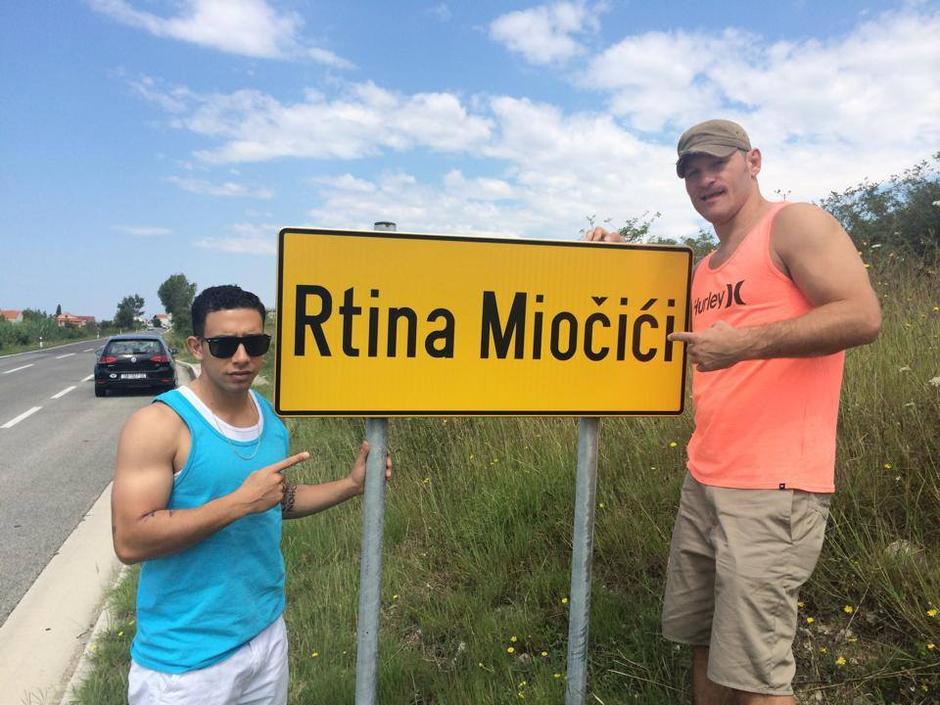 “I will try and come, but this time it will depend on my wife’s pregnancy. If everything is OK and she is able to travel then we will come.”

The 35-year-old is very proud of his Croatian roots.

“I use every opportunity to highlight it and I am proud of it. After all, that is one of the reasons why I have asked American journalists and television reporters to accurately pronounce my name and surname, and not say it like “Majosik” or something.”

Stipe previously fought in shorts with Croatian checks but UFC sponsors Reebok does not allow this now. They can’t, however, ban his Croatian tattoos.

“I have two. One is the Croatian grb (coat of arms) and the other is our family coat of arms. I am proud that I have Croatian roots,” Stipe says, adding that he wants to make sure his first child, due later this year, is also aware.

Tattoo dedicated to his Croatian roots

“I would love them to learn the Croatian language. Better than me. I can understand a lot, but I can not speak. Of course, I know all the swear words which probably everyone knows when they learn Croatian.”

The 3-time UFC champion is also in constant contact with his father Bojan, who now lives in Austria.

“My father and I hear from each other twice a week and always on the day of a fight. He usually wishes me luck and for me to enjoy it. It has become a tradition,” Miocic said.

Stipe says that one of the first people to congratulate him on his recent win in Boston was Croatian legend Mirko ‘Cro Cop’ Filipovic.

“Very quickly after the win, I got an SMS from Mirko. He is a legend, an unbelievable fighter, and it is an honour that I have him as a friend,” he explained, before adding.

“He was always a beast, a very, very hard fighter. All us young fighters loved his high-kick. His ‘right high-kick hospital, left cemetery’ was great.

“Mario promised to give me his shirt which I will frame and put on my wall. I will keep my fingers crossed that he and the guys have a successful World Cup in Russia.”

Miocic will be back in the Octagon on July 7, the same day his good mate Mandzukic could potentially be playing for Croatia in the World Cup quarter-final. to defend his title for the fourth time.

UFC has announced that Miocic will fight current UFC Light Heavyweight Champion Daniel Cormier (38) in a battle of the champions.

Miocic and Cormier will square off for the heavyweight belt in Las Vegas as part of UFC226.

Stipe says he has no intention of bowing out anytime soon either.

“While I am winning I will not retire, and I’m convinced that you will be able to watch me for a few years more yet,” he concluded.