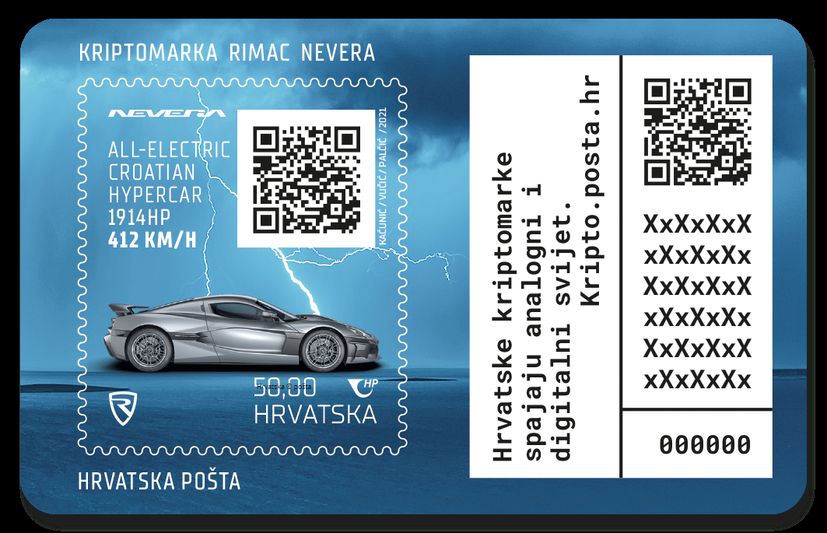 ZAGREB, 8 September 2021 – Croatian Post has presented the third Croatian crypto stamp that will be put into circulation tomorrow with the motif featuring the Rimac Nevera electric hypercar.

“In order to faithfully translate collectibles into the digital world, crypto stamps are divided into different digital categories with an emphasis on uniqueness and exclusivity. The Rimac Nevera motif thus appears in five different categories: gold Rimac Nevera in 2000 copies, silver in 4000, bronze in 6000, grey in 8000 and blue-green in 10,000 copies, which makes a total circulation of 30,000 copies,” Croatian Post said.

The authors of the stamp are Ivana Vučić and Tomislav-Jurica Kaćunić, designers from Zagreb, and the photo was taken by Danijel Palčić.

“Croatian crypto stamps are conceived as a perfect combination of analog and digital, and the third is especially interesting because it immortalises the Croatian hypercar of the future – the Rimac Nevera,” Croatian Post added in its statement. 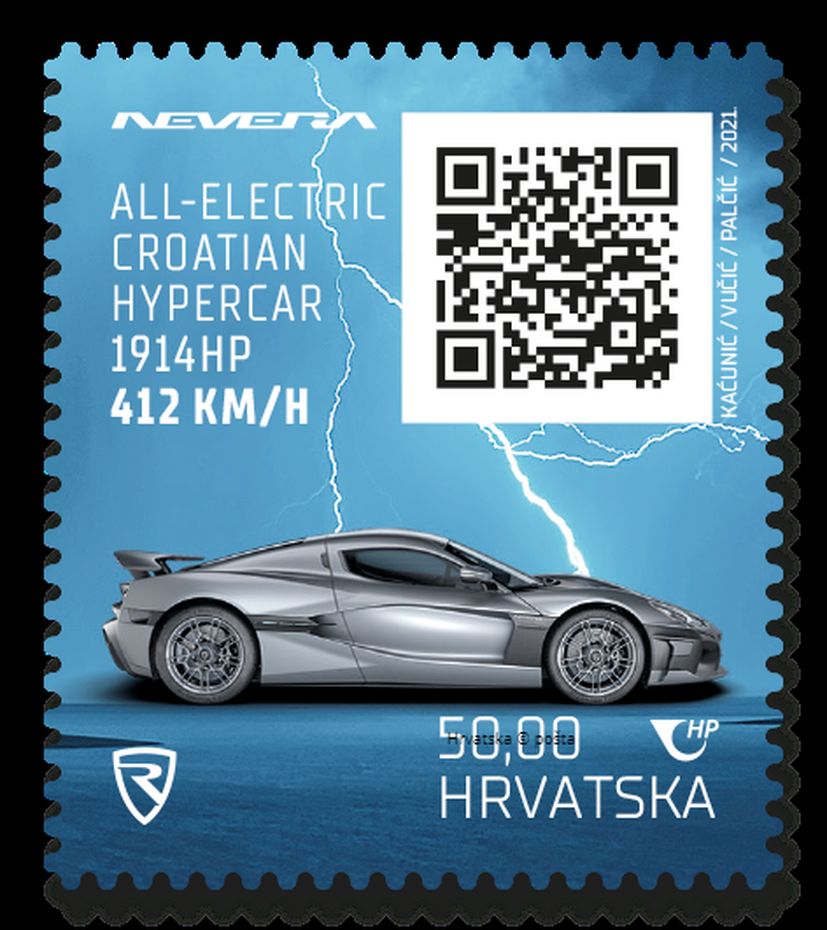 The new crypto stamp can be found in the online store kripto.posta.hr/marka/v3 (available from Thursday, September 9 at 8:00 am) where the Croatian Post allows the exclusive purchase of the first 1,500 crypto stamps and their payment in cryptocurrencies, on the webshop epostshop.hr and in all major post offices.

In 2020, Croatian Post issued two commemorative blocks with crypto-stamps with different motifs depicting postal transport through the centuries. Croatia became the third country in the world to issue its own NFT (non-fungible token) with Austria and Gibraltar.

This edition was realized in cooperation with the company Rimac Automobili and the Croatian companies Bitx and NodeFactory.

Rimac Nevera – a fully electric hypercar with a top speed of 412 km / h was created to provide an unprecedented level of performance. It has four electric motors with a total power of 1914 hp and 2360 Nm of torque and will be the most powerful and fastest accelerating homologated car in production regardless of the type of powertrain.

It is completely designed, developed and manufactured in the company Rimac Automobili in Croatia, and Nevera proudly bears the Croatian name, which truly reflects the extraordinary performance that can be released in the blink of an eye.

Nevera is a powerful Mediterranean storm, charged with lightning, which appears with extraordinary speed and strength. Rimch’s hypercar shares with disbelief not only the name but also the nature. Like the natural force after which it is named, it is equally capable of instantly changing nature from a safe and comfortable grand tourer to a high-performance car – stunning acceleration Nevera retains full throttle throughout the cycle and reaches 300 km / h from start in just 9.3 seconds. In addition, the car achieves a record fast 8.6 seconds per quarter mile (0 – 402 meters).

The first Croatian Crypto stamp was issued on September 9, 2020 on the occasion of the Stamp Day, and the exclusive 500 copies that could be paid for with cryptocurrencies in the online store were sold out in a record 16 hours.