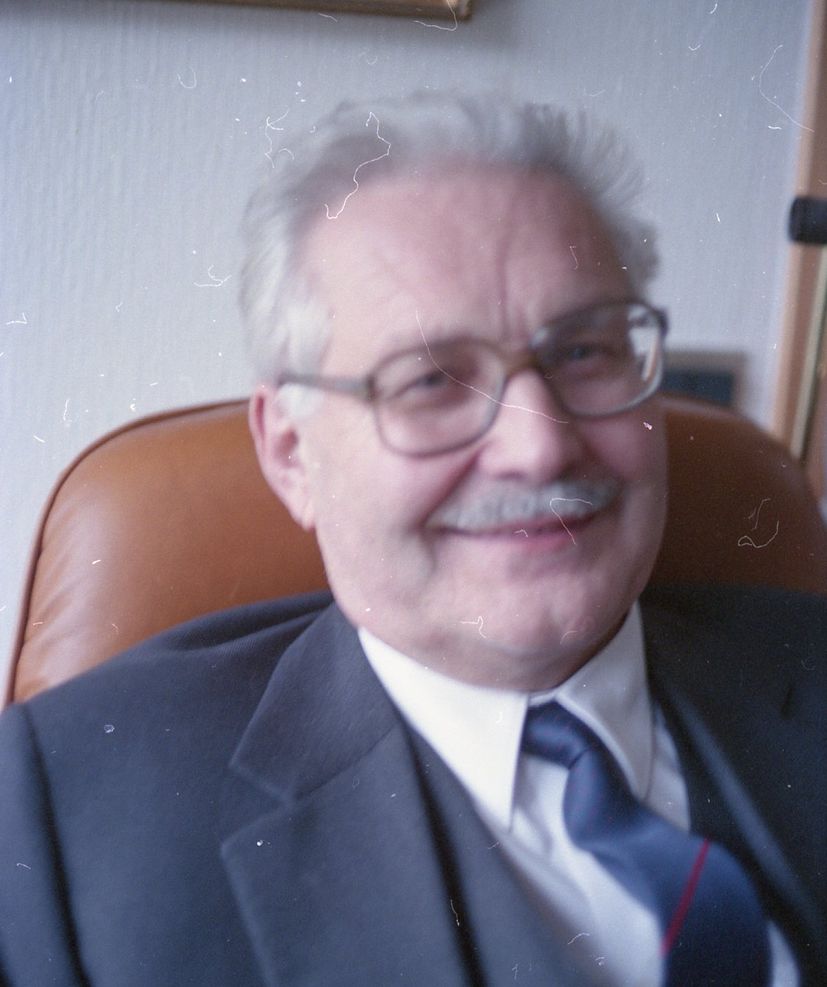 On Friday, August 27, 2021, one of the most prominent Croatian linguists, Academician Stjepan Babić, died in Zagreb at the age of 96.

He was born in Oriovac, Brod-Posavina County, Croatia, on November 29, 1925, and attended high schools in Slavonski Brod, Osijek and Zagreb, where he passed the maturity exam in 1947. Babić completed his studies of vernacular language and literature, Russian language with literature and German at the Faculty of Humanities and Social Sciences, University of Zagreb (1949–1955), where he received his doctorate in 1962 with the thesis Sufiksalna tvorba pridjeva u suvremenom hrvatskom ili srpskom jeziku (Suffixal Adjective Formation in Contemporary Croatian or Serbian) (Rad JAZU, 344, Zagreb, 1966). He worked at the said faculty until his retirement in 1991 (assistant since 1955, assistant professor since 1963, associate professor since 1970 and professor since 1975).

He studied in Cologne in 1962 in the seminar of Prof Hans Jakob Seiler, was a visiting professor there, at the Slavic Institute, in 1968/69 and 1984/85, and in Muenster he taught lexicography at a summer seminar in 1992. Under the influence of professors Seiler and Bulcsú László in Zagreb Linguistic Circle with some younger colleagues (Radoslav Katičić, Dalibor Brozović and Božidar Finka), he replaced the then prevailing Neogrammarians in Croatian linguistics with structuralism and placed the Zagreb linguistic school alongside current European trends. On these foundations he wrote his dissertation, which is considered the first structuralist book on word formation, and edited the school lexicon Jezik(Language) published by Zagreb’s Panorama publishing house, in which the concept of phonemes was treated for the first time from a structuralist point of view.

His life’s work, Tvorba riječi u hrvatskom književnom jeziku (Word Formation in the Croatian Literary Language), published in three editions (Zagreb, 1986, 1991, 2002), is a basic Croatian derivatology manual. According to Sanda Ham, it is unique even in the Slavic context as the work of a single person with a complete account of the word formation of a language. Its value also derives from the fact that it was created at a time when there were no computers for such work, so the author collected and edited it manually, systematizing more than 100,000 words. About six hundred pages are devoted to the formation of nouns, adjectives, verbs and adverbs according to the methods of formation, and within the formal categories, semantic categories are given, emphasizing semantisation even in the formation of adjectives. In the introductory part, for the first time in Croatia, creative methodology is presented in a systematic and modern way, and the basic concepts and creative theories are explained. Indexes include names, terms, meanings of nouns; an alphabetical list of noun, adjective and verb suffixes and an index of prefixes. They are the key to easily finding not only the formative mode or class, but also individual words and rarer formative types.

With Stjepko Težak he published, under various titles, the Gramatika hrvatskoga jezika (Grammar of Croatian Language), the longest-lived and most widely published book of its kind in Croatian linguistics (18 editions: 1966-2016). The book was constantly modernized and brought in line with professional developments (declension of nouns after the genitive singular, accusative -ju in pronoun declension as a more systematic and distinctive suffix, distinction of open and closed voices as creative features of vowels and consonants as separative vocal features). Individual solutions, such as the chapter on word formation, were the starting point for other modern grammarians. Together with Težak and Slavko Pavešić, he wrote Oblik hrvatskoga jezika (The Form of the Croatian Language) (1991) as part of the Academy’s Croatian grammar, published by Globus. In 1998 Matica hrvatska published his monographic study Sročnost u hrvatskom jeziku (Congruence in the Croatian Language), enriched with examples of works by contemporary Croatian writers, which distinguishes it from earlier reviews in other grammars.

A special chapter of Babić’s work is related to normative studies. During the Croatian Spring of 1971, together with Milan Moguš and Božidar Finka, he created the Croatian orthography, which was destroyed for political reasons and reprinted in London in 1972, so that it went down in history as the Londoner. After the creation of the independent Croatian state, the book was refined under the same title, freed from the remnants of Novi Sad Agreement (1954) and harmonized with the developmental forces of Croatian orthography, especially with the functional jekavisation of the pronunciation base and the increased number of morphological phrases for greater distinctiveness and unambiguity. With Sanda Ham and Milan Moguš, he co-authored Hrvatski školski pravopis (Croatian School Orthography) (Zagreb, 2005), and with Milan Moguš, Hrvatski pravopis (Croatian Orthography) (Zagreb, 2010), which largely concur with the conclusions of Croatian Standard Language Council.

A pronounced normative component in his very diverse linguistic interests led him to Jezik, a journal for the culture of Croatian literary language, of which he was editor from 1963 and editor-in-chief from 1970 to 2005. He gathered the most famous Croatian linguists in the journal, opened it to young colleagues, published in it a number of very remarkable articles and raised it to the prestigious level of A1 scientific journal.

He was not a typical cabinet researcher and scholar, he participated vividly and curiously in public reception and language production. In the book Temelji Hrvatskomu pravopisu (Foundations of Croatian Orthography) (Zagreb, 2005), he explained orthographic improvements and tried to direct the public debate in journalism towards a deeper and more comprehensive knowledge of the complex and multi-layered Croatian linguistic-orthographic and literary history, which, in his opinion, begins with Šiško Menčetić, Džore Držić and Bartul Kašić. In unchanged linguistic continuity, it led to the modern state, which Babić dealt with throughout his life. He dealt with it in the books Hrvatski jezik u političkom vrtlogu(Croatian Language in a Political Vortex) (Zagreb, 1990), Hrvatska jezikoslovna čitanka (Croatian Linguistic Reader) (Zagreb, 1990), Tisućljetni jezik naš hrvatski (Our Thousand-Year Croatian Language) (Zagreb, 1991), Hrvatski jučer i danas (Croatian Yesterday and Today) (Zagreb, 1995) and Hrvanja hrvatskoga (Croatian Wrestlings) (Zagreb, 2004), insisting with thorough reflection and convincing judgments against the disintegration of the Croatian language, but also against ignorant Croatianization. Babić addresses those who care about the Croatian language, who want to enrich and improve its expression, who respect the inherited linguistic treasure and do not run after the Anglo-Saxon fashionista terms.

He did not avoid public polemics (he collected the important ones in the book Hrvatska jezikoslovna prenja [Croatian Linguistic Conversations], Zagreb, 2001), on the contrary, he participated in them with passion (about unnecessary proofreading of literary works and professional Croatological books, about the suffix -telj, about controversial distinctive dictionaries), defending his views, but also retreating when the interlocutor had stronger reasons than himself, or when he himself, rereading the same texts, noticed new features that he had originally overlooked. In this way he showed the qualities of a true professional and open-minded scholar, and at the same time, in everyday life, those of a simple man and a deeply religious person who quickly forgot and forgave conflicts without big words and gestures.

His life during the existence of the Yugoslav communist regime was fraught with numerous difficulties. Among other things, he was attacked by the League of Communists and journalistic circles loyal to the regime, mainly because of the way he edited the journal Jezik. He found exhaust in literary prose works, short stories and novels, in the satirical autobiographical novel Crvena magla (Red Fog) (Vinkovci, 2002) and Vedre priče (Cheerful Stories) (Zagreb, 2000). Over several decades he collected jokes, which Naklada Pavičić published in 1995 under the title Hrvatski politički vicevi(Croatian Political Jokes). He greeted the founding of the Croatian state with enthusiasm, threw himself into professional work to compensate for all that he had previously been unable to write due to communist repression, and became politically active as a member of County House of Croatian Parliament (Županijski dom Sabora Republike Hrvatske) from 1993 to 1997.

He confesses his faith in lyrical prose writings published in the booklet Razmišljanja o Bogu i patnji (Reflections on God and Suffering) (Zagreb, 2005), and in his autobiographical memoir Na Božjim putovima (On God’s Ways) (published in excerpts in Marulić magazine 1995-1999, and in preparation for print as a monograph). A story of growing up, school days, war and post-war events, life’s many trials, and the unforgiving circumstances in which he felt the presence and protection of God, who helped him not only to survive but to find a foretold way out in hopelessness. Such encounters of divine grace gave birth in him to a special mercy – appreciative and friendly towards the other, in search of the same merciful harmony.

He dedicated the book Hrvatski jezik slavonskih pisaca (The Croatian Language of Slavonian Writers) (Slavonski Brod, 2009) to his homeland, in which he collected contributions from scientific conferences that share Babić’s commitment to preserving the old original language without editorial interventions and modernization adaptations.

He received the highest scientific and state awards: the Bartol Kašić Award for significant scientific activity in the field of study of the Croatian literary language (1991), the Order of the Danica hrvatska with the face of Ruđer Bošković for special merits in science (1995), the Homeland War Memorial (1995), The Memorial of Homeland Gratitude (1995), the Order of Ante Starčević (1996) and the State Lifetime Achievement Award (2004).

With his prolific and diverse linguistic contribution, Academician Babić has left a lasting mark on many generations and shaped Croatian linguistic culture.

Professor Babić is one of the most significant authors in the program literature of the University Study of Croatology at the Faculty of Croatian Studies.