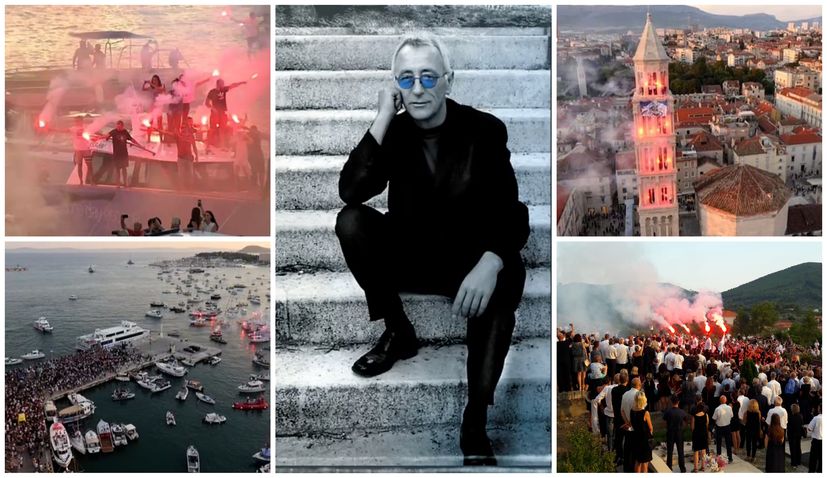 They say “eyes are the windows to the soul” but when it comes to Croatians and the passionate way we live life even a blind man could read us like an open book by listening to our music. Without a doubt music is an integral part of a Croatian’s identity: interwoven with our culture, coloring all our memories and the binding force that connects one generation with the next.

At the forefront of music has always been the legend Oliver Dragojevic. Born on December 7, 1947, in Vela Luka, on the island of Korcula, he was a singer that was so iconic during his career, Croatians referenced him by only his first name.

When news hit on 29 July 2018 that he had passed away at the age of 70, the country mourned the loss of their most talented and enduring singer, who had a discography spanning almost forty years.

To me, he was one-of-the-kind, a musician with his own unique style. His voice sounded hypnotically mesmerizing no matter what he sang, calming yet deeply powerful. His lyrics were simple but poetic, something we did not just hear but feel.

I don’t know how he did it but somehow he managed to compress and express all the feelings we had inside ourselves into each and every song. He had a gift that was impossible to gift-wrap up with a bow.

Though it is impossible to truly compare the scores of hit singles he released over the years, here are the Top Ten Oliver songs that come to my mind whenever I think of this Croatian legend.

Each of the following songs has entered the realm of cult status over the years, never forgotten, still alive, and loved by many, past, present and beyond.

How does one even convey the perfection of this song? Written by Gibonni and performed with pure heart and soul, this is a simple song about a love that never came to fruition. There is nothing explicitly earth-shattering about the words or music but at the same time it is more than enough. Like all great things, the whole is so much bigger here than all the smaller parts combined.

Mesmerizing and throbbing with emotion, I got goosebumps the first time I ever heard this song. Years later, I still feel the same way. It is such a compelling, haunting melody that would seduce even a foreigner, despite not understanding a single word of it.

The older I get, the more I appreciate this song, about a son who later discovers in life through life experiences that he has so much more in common with his father than he first believed.

This song has always had a soft spot in my heart as it was written by my first cousin, songwriter Vinko Barcot, for Oliver. Melodic and heartfelt, this song is undeniably beautiful and cemented Oliver’s spot as the greatest musical superstar Croatia has ever produced.

Another song which perfectly captures the pain of having to say goodbye to something you wished you could hold in your arms forever.

Released the year I spent a long summer in Croatia back in 1987, I didn’t know what the song even meant as a twelve year old but I nonetheless immediately loved it from the first moment I heard it

This song manages to perfectly capture every emotion about a longing for love that never came to fruition. The pain about never finding love is almost palpable. Oliver didn’t need a river of tears to share his pain – his words were simply enough.

Released in 1977, this is the song that first put Oliver on the map and made us all feel like we too were a dove soaring through the skies.

Over the years Oliver sang about all aspects of love but this one really stopped me in my tracks and made me wonder: sto to bjese ljubav i bar na tren biti zaljubljen?

More pain, more longing, more pure emotion spilled out into a song that was released in 2004 and made us all realize that Oliver would continue to make great music until the very end.

It must be said these songs are undoubtedly only the tip of the iceberg when it comes to a compilation of the best Oliver songs ever released. Oliver was a prolific musician, with countless songs that had the ability to reach down deep and leave an indelible imprint on our soul forever.

Over the years I have noted that like memories, music also never, ever dies but lives on inside us forever. Each of us has our own collection of songs which instantly and unexplainably touches us in ways that is beyond comprehension.

We have all had moments in our life we wish we could freeze-frame for eternity. For me, those moments more often than not occurred with an Oliver song serenading me in the background and teasing me with its emotions. Only now can I see the song was actually in the forefront of the occasion.

All I have to do is hear a particular tune now and I am transported instantly back to a time and place where those memories were created and cemented with that exact same background music.

I only need to hear a few seconds of Moja Prva Ljubav and I am instantly transported back to another time and place – my grandparent’s old stone komin in my little village of Pupnat, where we danced all night to this song on repeat during the winter of 1995.

Sreca Je Tamo Gdje Si was the first song on an old cassette mix-tape made by one of my best friends in Croatia, which I listened to it religiously even long after such tapes became obsolete.

Nadalina reminds me of the all late nights at Croatian dances that my parents took me to as a kid, where I would lay across the seats and have a jacket gently placed upon me to keep me warm once I fell asleep.

Over the years, Olivier’s music has unveiled in us all layers of emotions – joy, happiness, sadness and sometimes even despair – but the common denominator of each song is its ability to tug at our heartstrings. Oliver Dragojevic, may you forever rest in peace. There will never, ever be someone quite as great and amazing as you again.