ZAGREB, Sept 15 (Hina) – The appointment of Msgr. Ante Jozic as the Apostolic Nuncio to Belarus is also an act of recognition for Croatia, Prime Minister Andrej Plenkovic and Foreign Minister Gordan Grlic Radman said in Split on Tuesday after talks with the Holy See’s Secretary of State, Cardinal Pietro Parolin.

Cardinal Parolin on Tuesday arrived in Split where he met with Croatia’s prime minister and foreign minister.

On Wednesday, Cardinal Parolin will ordain Msgr. Jozic as an archbishop, after Pope Francis, appointed this 53-year-old Croatian priest the Apostolic Nuncio to Belarus in May. The ceremony of the episcopal ordination will take place in the Church of the Holy Family in Solin. 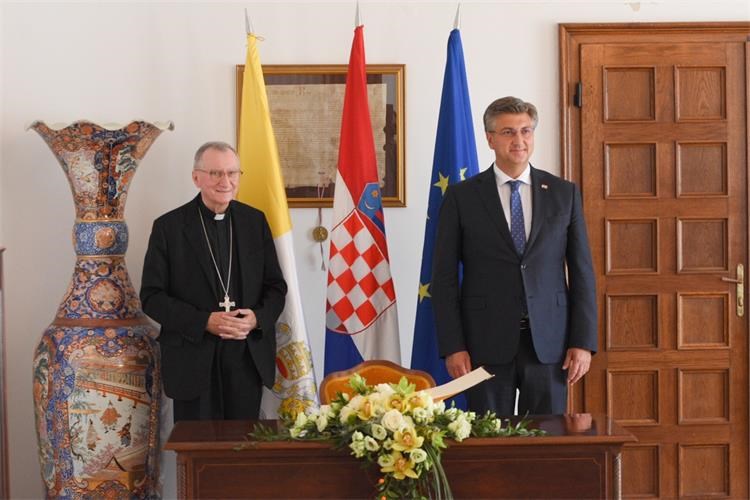 “Croatia is proud of this, it is yet another sign of recognition from Vatican diplomacy, for him to be assuming such an important post,” Plenkovic said after meeting with Parolin, for the fourth time in the last few years.

Plenkovic said that relations between Croatia and the Vatican “are exceptionally good and full of mutual respect and cooperation”, adding that he and the Italian cardinal discussed the situation in the neighbourhood as well as European and global topics.

Minister Grlic Radman said the frequent meetings “bear witness to the strengthening of diplomatic relations” between Zagreb and the Holy See while Msgr. Jozic’s appointment “speaks of the strength of Croatia’s presence in the Vatican and its diplomacy” and “will turn a new page in bilateral relations.”

“Dalmatia can be rightfully proud of having given so many nuncios,” he said, referring to the fact that two current apostolic nuncios are from Dalmatia.

Jozic was born in the town of Trilj in the Dalmatian hinterland, on 16 January 1967. Archbishop Nikola Eterovic, born on the island of Brac, has been the papal nuncio to Germany for seven years, having previously served as the first Vatican diplomat in Ukraine.

After earning a doctoral degree in canon and civil law at the Pontifical Academy, Jozic served in India, Russia and Hong Kong, where he was until March 2019, the Catholic news agency IKA said.

Jozic, who has been a member of the Vatican’s diplomatic service since 1999, speaks Italian, Spanish, English, French, Portuguese, German, Russian, Chinese and Polish.