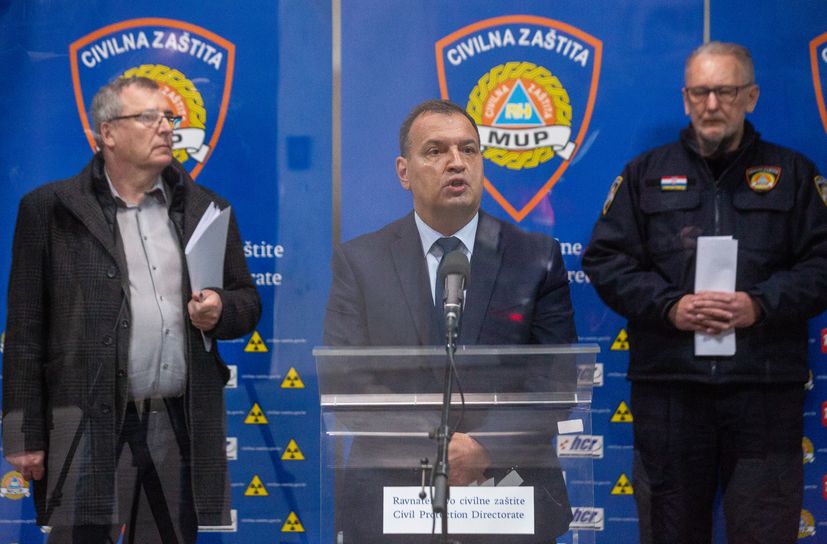 ZAGREB, April 9 (Hina) – Sixty-four new coronavirus cases have been confirmed in Croatia in the last 24 hours, another 40 people have recovered, and one person has died, the national civil protection team said on Thursday.

“Since yesterday, a patient has died in Zagreb’s KB Dubrava hospital. It was an elderly man with numerous comorbidities,” Beros said.

So far a total of 20 people have died from the novel COVID-19 virus.

“Thirty-four patients are on ventilators, 326 have been hospitalised while 842 infected persons are at home,” Beros said.

Forty more people have recovered from the disease, which puts their total number at 219.

Beros said that he had received a report by the epidemiological services in Split and the head of the Croatian Public Health Institute’s (HZJZ) Epidemiological Service, Bernard Kaic, about events related to a nursing home in Split where a dozen residents have tested positive for the coronavirus, and that the report would be analysed during the day.

No one from Split nursing home contacted epidemiologists

Beros added that according to data from the public health institute in Split neither the nursing home’s staff nor the general practitioner in charge of its residents had contacted local epidemiologists regarding the situation in the home.

He said that Croatia had managed to prevent the entry of the virus into the health system and nursing homes for a long time but that one should expect more of such incidents to happen.

“It is impossible to hermetically close everything. This fight has been going on for a month and a half, we have preserved the integrity of the health system and nursing homes and managed to prevent the virus from entering the system much longer than some more developed countries,” he said.

Social Policy Minister Vesna Bedekovic reiterated that back on February 23 a decision had been made in cooperation with the national civil protection authority to ban visits to nursing homes, which was soon followed by measures on movement inside nursing homes.

Minister: Doctors must inform epidemiologists of any suspicion of COVID-19

One of the main recommendations was for nursing homes to report to the ministry every 24 hours on the situation in them. Three weeks ago, a special team was set up to answer all phone calls and e-mails from service providers and clients, and cleaning and disinfection were stepped up.

Only employees and professional staff may enter nursing homes, and residents may leave only in case of dialysis and cancer treatment, Bedekovic said.

New admissions to nursing homes have been suspended, except in emergency cases, when 14-day isolation is mandatory.

Commenting on the case in Split, Bedekovic said that the ministry learned of the situation on Tuesday evening and that in earlier emails sent to the ministry no mention was made of any cases of infection.

She said that this morning she learned of the case of an infected female resident of a nursing home in Koprivnica from the home’s director.

The woman had a temperature on Friday and received therapy until Monday when she underwent examinations. She was hospitalised on Tuesday and this morning the news arrived that she is positive, said the minister.

HZJZ head Krunoslav Capak said that currently, 199 employees in the health system were positive for the coronavirus – 92 nurses, 72 doctors, 14 dentists, 9 administration workers, 12 pharmacists and others.

Capak said that the national civil protection authority had approved an Easter procession on the island of Hvar considering that it is a traditional event and there are no infected persons on the island.

Fifteen people will be allowed to take part in the procession, they will have to be at a certain distance from one another and will not be allowed to communicate or have physical contact.

The head of Zagreb’s Fran Mihaljevic Hospital for Infectious Diseases, Alemka Markotic, called on citizens to continue being cautious and complying with restrictions.

“If a well-intentioned decision is made to open farmers’ markets, that does not mean that hundreds of thousands of people should gather there and security guards have to make order,” she said, calling for self-discipline.

Bozinovic: We are entering a period of several critical weeks

Interior Minister and head of the National Civil Protection Authority Davor Bozinovic said that the coming Easter holidays were not a time to travel and relax.

“I would like to ask everyone planning a short trip to Croatia for the Easter holidays not to do it, for their own safety and that of the people they would like to visit, but also because it is uncertain whether they will be able to return and under what conditions to countries they would like to come from. This is not a time to travel and relax,” he said.

“We are entering a few critical weeks. Let’s stay home,” he said.