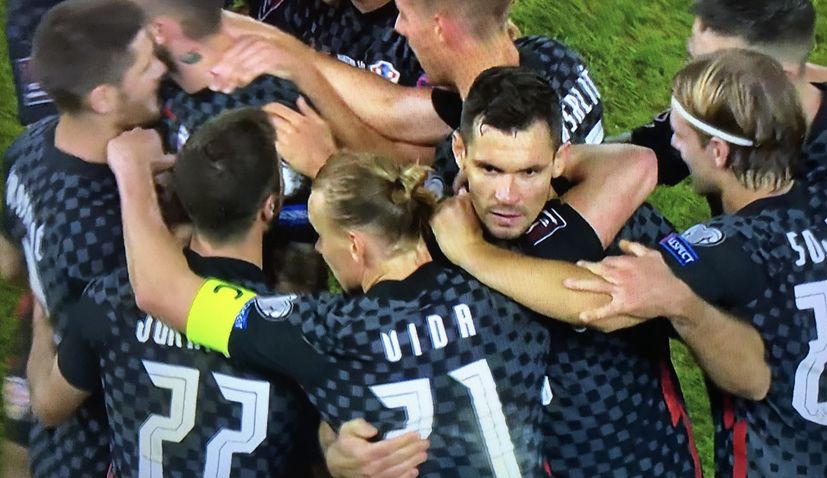 BRATISLAVA, 4 September 2021 – Croatia has beaten Slovakia 1-0 in their 2022 World Cup qualifier in Bratislava on Saturday night.

Marcelo Brozović’s late volley gave Croatia all three points to send them back to the top of Group H with Russia. Both nations have 10 points.

Zlatko Dalić made a number of changes for tonight’s match from the side that drew 0-0  in Moscow midweek. A muscle strain forced keeper Dominik Livaković out and he was replaced by debutant Ivica Ivušić from Osijek. Domagoj Vida returned in place of Duje Čaleta-Car, Antonio Čolak came in for Andrej Kramarić up front whilst Luka Ivanušec and Mislav Oršić started on the flanks.

Again Croatia started brightly, controlling possession, and they would be the first to fashion any real attacks.

Oršić came close in the 10th minute when his powerful strike form 20 metres out rattled the crossbar. Ivanušec had a shot comfortably saved before Čolak had a good chance to put Croatia in front but he took a touch too many inside the box and was shut down.

Slovakia created chances themselves. Mak would come closest midway through the half but his shot inside the box was well saved by Ivušić.

At the start of the second half Dalić made a triple substitution, bringing on Ivan Perišić, Mario Pašalić and Marko Livaja for the disappointing Čolak, Nikola Vlašić and Ivanušec.

Croatia managed to create a few half chances, but once again they lacked ideas and effectiveness in the final third of the pitch. Slovakia were threatening on the counter attack, but they also failed to fashion any real clear cut chances.

With minutes remaining, Brozović would volley home from the edge of the box after the ball fell to him from a free kick to give Croatia victory and an important three points on the road to Qatar.

Coach Dalić will be still be concerned with his side’s lack of ability to score goals. Livaja, Kramarić, and Čolak have all been used in the last 180 minutes without success, and the absence of captain Luka Modrić in the midfield has left a big gap.

“Congratulations to my side for the effort and for not giving up and fighting. The pitch was very bad and it hindered us but the three points was the most important. The first half an hour we had control but always lacked the final pass. Again, I want to congratulate my team and to invite the fans to turn out in Split,” Dalić said after the win.

One of the stand-outs tonight for Croatia was new keeper Ivica Ivušić.

“It was a dream debut, but the most important was the three points we took. We deserved the win and I am happy I played my part and that I am part of this side. I was happy to make my debut, but not that Livaković was injured,” said the impressive Ivušić.

“This is a very important win, it was a tough match, a tough pitch but they most important was the victory to take us closer to the World Cup. We are happy with the three points,” Oršić added.

Croatia will play their final qualifier in September on Tuesday night against Slovenia in Split.