LADO held its first dance concert this year in a packed Kodály Center Hall, on May 26 in Pécs, Hungary.

The concert marked the Statehood Day of the Republic of Croatia and the 30th anniversary of international recognition and the establishment of diplomatic relations between Croatia and Hungary.

The Croatian audience will have the premiere of the dance concert in Lipik, on June 3, 2022 at the Lipik Pools.

The dance concerts will continue on June 5 in Ivanić-Grad and on June 25 in Trilj, and on June 11 the ensemble will have an additional international presentation in Mainz.

The highlight of the LADO dance program will be with Tanec, the Macedonian national ensemble, who they will perform with on tour on July 14 in Slavonski Brod, July 16 in Zagvozd and July 17 in Split.

Following this, questioning the contemporary role of traditional art, the position of the Ensemble in the 73rd year of its operation is very clear. This year’s dance concert represents precisely the protected intangible cultural heritage, which programmatically directs it towards different Croatian regions.

The program consists of 11 points, some of which are anthological and always welcome. At the concert we can see “Ladarke”, a kind of anthem and a trademark of the ensemble, “Valpovačko kolo” will take us to Eastern Slavonia, while “Starovinska pivanja” will show archaic solo songs from the island of Mljet, but also single shepherd’s songs from Gornje Poljice, for which the name “ojkanje” has become common in professional circles. Dubrovnik will present the “kolo poskočica” Linđo, led by a ringleader, and danced to the accompaniment of a lyricist, while the dance tradition of Baranja will be presented with the choreography “Ej sviraj Pavo”, which is the origin of Baranja’s music and dance traditions, accompanied by bagpipes, distinctive folk costumes and poskočica and bećarac – an overture to the temperamental dances of “udvoje”.

Prigorje dances, on the other hand, take us to the area around Zagreb, where polka and drmeš are still danced today, which used to be danced on festive occasions. 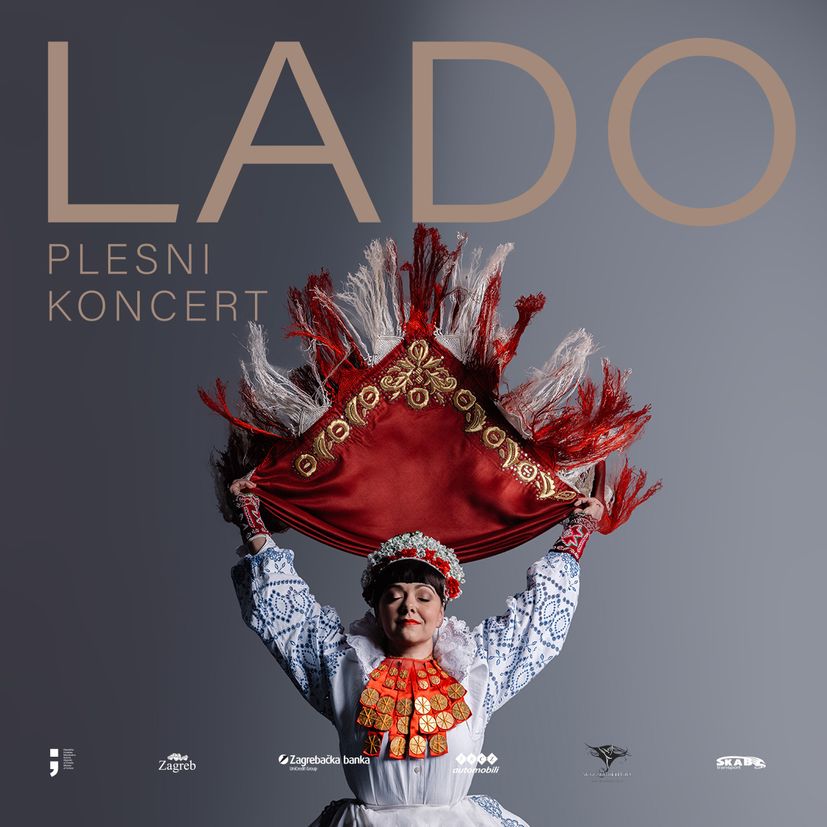 Energetic, inspired and professional performance are characteristic of the dance concerts of the LADO Ensemble. These choreographic achievements and stage interpretations are so close to the starting point, that their artistic impression leaves no one indifferent.

These elements in LADO’s dance and singing are key in how they represent a rich tradition, which is alive, clean and in colour on stage.