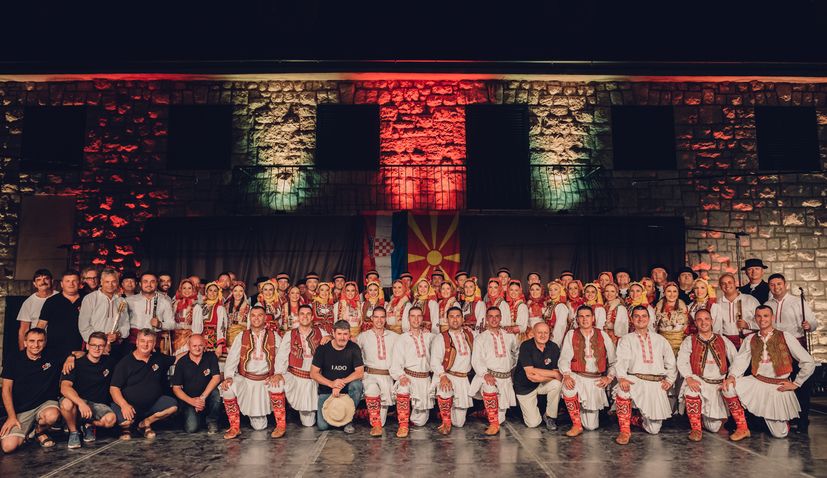 Under the open sky and the pine trees of Split’s Sustipan, the joint tour of LADO AND TANEC came to an end, which showed all the strength and relevance of their national cultures with a cross section of the most popular and anthological choreographies, as well as the most beautiful musical achievements of Croatian and Macedonian traditional art.

LADO AND TANEC are concerts that once again emphasised cooperation and mutual support, since both ensembles share a similar artistic mission and a tradition of 73 years of activity.

LADO and TANEC performed joint dance concerts in three cities and supported the biggest national cultural events with their hosting.

The tour opened on the stage of the Concert Theatre Hall of Ivana Brlić Mažuranić in Slavonski Brod, and the guest appearance took place as part of the 33rd Brod Music Summer.

The other two concerts took LADO and TANEC to the south of Croatia, so the second performance was at the crowded Actors’ Square in Zagvozd as part of the 25th edition of the Actors in Zagvozd event.

The last stop, and at the same time the climax of this dance concert tour, took place in Split. The concert was part of the program of the 68th Split Summer event, and it took place in the authentic Mediterranean atmosphere of Split’s Sustipan under the open sky.

The Split concert was preceded by a performance by FA Jedinstvo, which performed “Old Split Dances”. The concerts, in addition to an insight into what the ensembles do best – dance and sing and play, showed a special connection between the artists and the audience and confirmed that such collaborative projects are an investment in the future and a way to attract a new audience.

These two national ensembles have long been recognised as ambassadors of their countries all over the world, which was also confirmed in Croatia on this tour.

Their collaboration is proof not only of dedication and tireless approach to work, but also the opening of some new doors, audiences and spaces where traditional art comes to the fore.

The key to success is the great reaction of the enthusiastic audience, who supported all the concerts and thus sent a message and motivation to LADO and TANEC for further projects of this type.