Croatian tennis player Ivo Karlović may be approaching his 40th birthday, but it is not showing on the court in 2018.

The 6 ft 11 stalwart continues to break records and when it comes to service game stats there is nobody even close on the ATP tour.

The latest ATP Score and Stats for 2018 reveals some pretty impressive statistics for a man just shy of his 40th birthday. 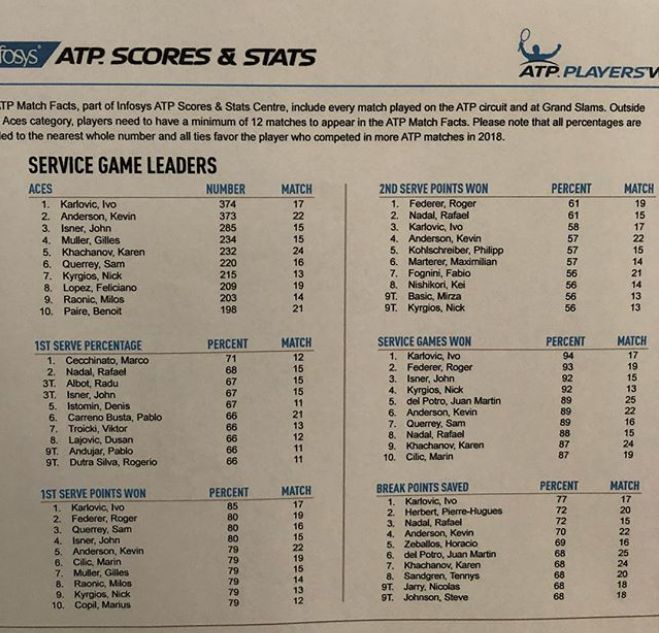 Not surprisingly, the world-record ace holder leads the pack this year on the ATP for the most number of aces. Karlovic has whacked down 374 aces in 17 matches this year.

There are also no other players on tour better than the Croatian when it comes to points won on first serve. Karlovic has an 85% points on first serve rate, 5% ahead of Roger Federer who is in second place.

Karlovic also leads the ATP this year for the number of service games won. Karlovic has won 94% of his service games, one percent ahead of Roger Federer in second place.

Another surprising statistic where Karlovic is in number one spot in the world in 2018 is in the category of break points saved. Karlovic has saved 77 break points, 5 more than the next best.

Karlovic seems to be getting better with age. He has won eight ATP singles titles and is the oldest player ranked in the top 100.

At one stage he officially held the record for the fastest serve recorded in professional tennis, measured at 251 km/h (156 mph), before being surpassed by Samuel Groth in 2012. He holds the all-time record for career aces with 12,661 – and is one of only fourth players in history to surpass 10,000 aces.