When boxing was bold, popular and often glamorous, when boxing championship matches were the hottest sporting events of the year, it harboured within it a harshness very few could endure, it carried with it true fighters in life on all life’s fronts including existence, Croatian-born Australian boxer Ivan Rukavina was among the kings of boxing.

In his autobiographical book “My Fighting life” (also translated into the Croatian language: “Moje Borbe”), Melbourne-based Ivan Rukavina, born in 1963 in the village of Kosa near Perušić in the rural and mountainous region of Lika In Croatia, takes us on an amazing and captivating journey of personal and family struggles for survival amidst poverty and political oppression, home birth with grandmother cutting the umbilical cords of all the children born in the family, origins of the Rukavina Clan, World War Two politics, communist Yugoslavia oppression and distressfully lacking opportunities to succeed in life without subscribing to the Communist party, the terrible toll for being Croatian patriots in communist regime forced on his family, his father’s flight to Australia in 1974 and return to Croatia in 1979 and then return to Australia and by 1981 both his parents’ arrival to Australia to live, his sister also, and finally his own migration to Australia in 1983 and the hardships and challenges that came his way on the path to his boxing glory that saw Ivan as the first Australian gold medal winner in history at King’s Cup amateur boxing tournament in Bangkok in 1988.

Then from 1989 to 2001 (with 1994-1999 inactive) started his professional boxing career, with 9 Light Heavyweight title wins that earned him the nickname of Ivan Rukavina “The Terrible”, compete in a great number of boxing tournaments and championships in Australia, New Zealand and the United States of America in particular; a career spotlighted by his entry into the Australian Light Heavyweight Boxing Champions hall of fame two years in a row: 1989 and 1990.

Looking for more fights and honours, Ivan went to the United States of America where he lived for a few years during the 1990s and fought and sparred with the best in his class.

Ivan Rukavina’s book “My fighting life” is packed with stories from his personal, family and professional boxer life that will both delight and sadden because life had not been kind to many who found themselves seeking livelihood in a foreign land.

His training regimen and fight strategies, the delights of embarking upon sparing in the ring with other professional boxers and much more is contained in this telling of a tale of what it takes to be a champion and a legend in the realms of pure determination and hard work to achieve one’s dreams.

His good-hearted nature, generosity, quiet and considerate essence that come through the pages of this book, including his evidently uncanny ability to make a reader both sigh with heavy sadness (when he is faced with needing to care for his frail and aged parents, for instance) but also laugh with joy and awe at encounters and incidents that both enrich and question life, come through strongly and captivatingly as he weaves this story in his unassuming but warmly colourful style that is personable, gritty and a real delight to read.

His story is filled with incidents and anecdotes filled with humour, romance, failure, sacrifice and disappointment, but above all a fighting spirit defined and contained strongly with a never-give-up  or try-and-try-again attitude.

And so, Melbourne, Australia-based Ivan Rukavina has quite a story to tell the world how migrants can rise and shine in a new country, in a strange country where even the spoken language is foreign for quite a while after arrival; and a while later left a rather strong accent in speech that was strange to most and almost always beckoned questions about one’s origin or even race.

It is a story to which multitudes can relate. Harsh communist Croatia, threatening poverty, and lack of opportunities to succeed in life with own skills, to immigrant life in the West where all the doors one could possibly want were open and all one needed to employ was determination, sacrifice and hard work to step over the door threshold into the room of realised dreams and fruits of labour.

I love how this book chronicles the important events and people in Ivan Rukavina’s life as well as briefly writing about Croatian history, with which topic he begins this book dedicated to the memory of Bill Slayton and Dana Goodson, his boxing trainers but also, as he says, his mentors who shaped his career. Foreword to Ivan Rukavina’s book is written by Barry Michael, World Super Feather Champion 1985-1987, who says: “To win The Kings Cup as an amateur in Bangkok against Russian opposition was a huge achievement… Undoubtedly Ivan was a world class boxer and incredibly tough as he was never KO’d or stopped during his career…” 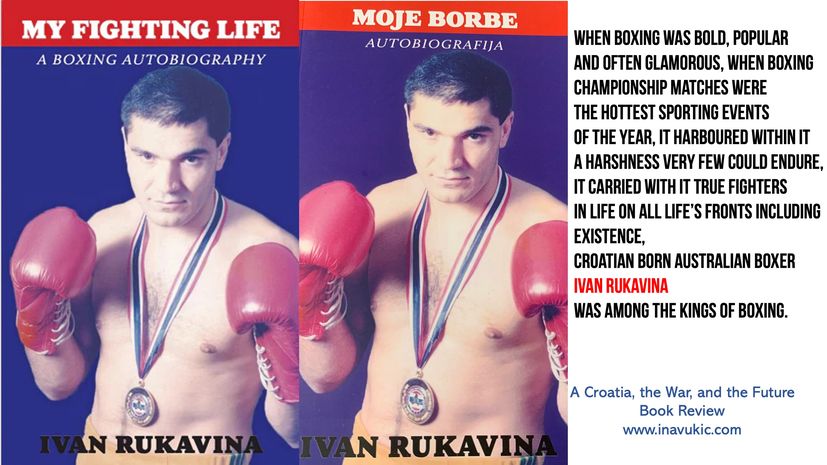 In this fascinating autobiographical book Ivan Rukavina weaves. In direct and simple language understood by all, a compelling story about how immigrant families achieved the Australian Dream (indeed any Western country’s dream) over the last half of the last century.  Considering this, in particular, the book is a perfect gift for any occasion as it does form a piece of today’s multicultural Australia strongest treasures: how migrants built Australia. “My fighting life” (“Moja Borba”) is uplifting in its message, engaging in its composition, and powerful in its significance and is available, among other places, on Amazon and at the Zagreb Croatian Bookshop in Melbourne.