Home » Travel » Island of Brač as Never Seen Before While researching the literature of my birth island Brač I was left surprised by the numerous cultural richness and natural phenomena in my vicinity.

An idea was made for my first independent project to capture the wonders of island Brač in a never before seen way. I’ve photographed exclusively during the night to showcase the motifs under a new light and to accentuate their mystique.

Unfortunately, in a few decades, human expansion and light pollution will most likely make sights such as this impossible. I wanted to point out this issue and perpetuate all the wonders of the night sky before they disappear.

Astrophotography was new to me, I’ve studied for months not only the technique but also the movement of stars, moon phases, meteor showers and light pollution and I’ve constantly monitored weather conditions via the satellite.

Night panorama from the summit of Vidova Gora, island Brač. From the left side, the sun is rising through the clouds. The moon is illuminating the mist which is descending from Velo Koštilo hill towards Bol, Zlatni Rat and island Hvar. Milky way dominates the sky and on the right side Jupiter is peeking through the clouds

My daily obligations prevented me from exploring the terrain during the daylight, because of that I never knew what was in store for me, except for complete darkness and unpredictable nature. 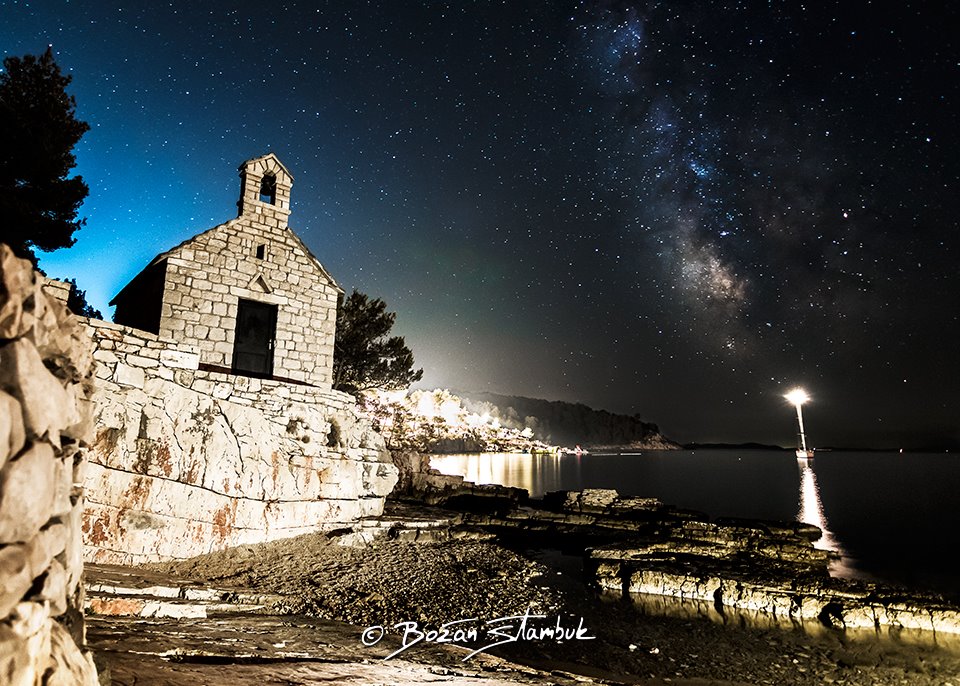 Night sky and Milky way above the St. John the Baptist’s church in Osibova bay, Milna, island Brač. This church was built in the 14th century. The road from Milna to Osibova bay is lead by 14 stations of the Way of the Cross, built as chapels at the beginning of the 18th century. This path leads us to this, although smaller and more modest, gothic church that stands magnificently atop the cliff

An adventurous spirit and love for the island led me through unknown and inaccessible terrains so that I could complete my project, despite sleep deprivation and dangerous animals. In addition, out of 8760 hours in the year, Milky way is best visible for only about a hundred hours, so I was also limited by time.

Sunset and movement of stars (star trails) above the monastery in Blaca desert, Nerežišće, island Brač. Blaca desert is an isolated area which stretches over fifty-six hectares at Dragovode, all the way to Blaca bay. Within the desert, named such due to the depravity of natural and other resources, there is a monastery comprised of a church from 17th century, residential and work buildings, and also an observatory and a library. Today this abandoned monastery is a museum ‘Pustinja Blaca’, one of the most attractive sights on the island 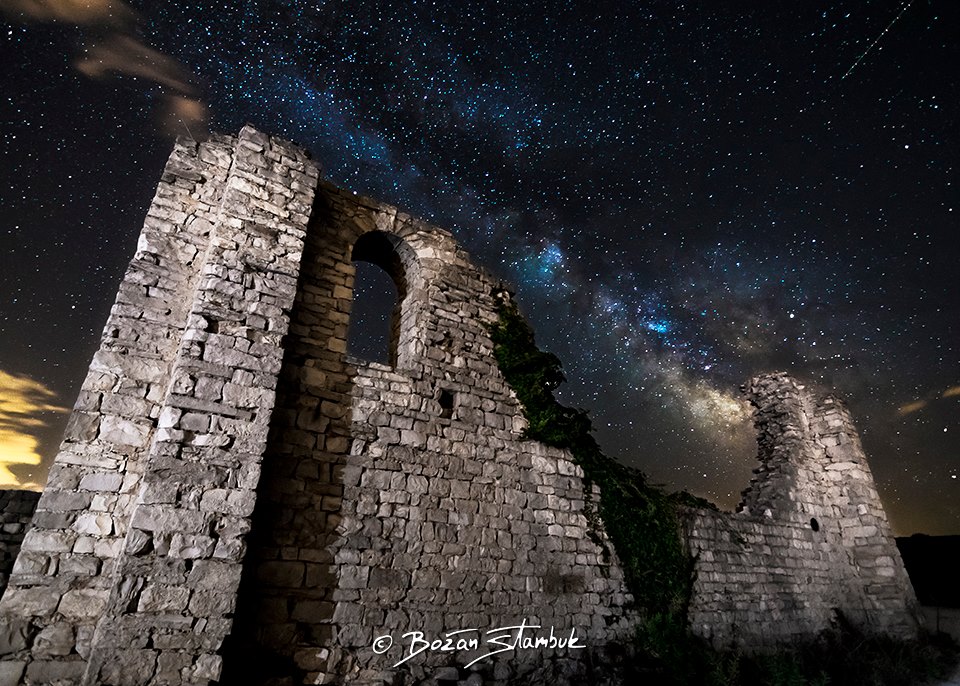 Night sky and Milky way above the ruins of villa rusticae Mirje, Postira, island Brač. This locality is situated high on „Mali brig“ above Postira, in a cultivated agrarian landscape which preserves the atmosphere of the classical period with its drywall piles. The remains of villa rusticae, early Christian basilica and medieval monastery were found at Mrije 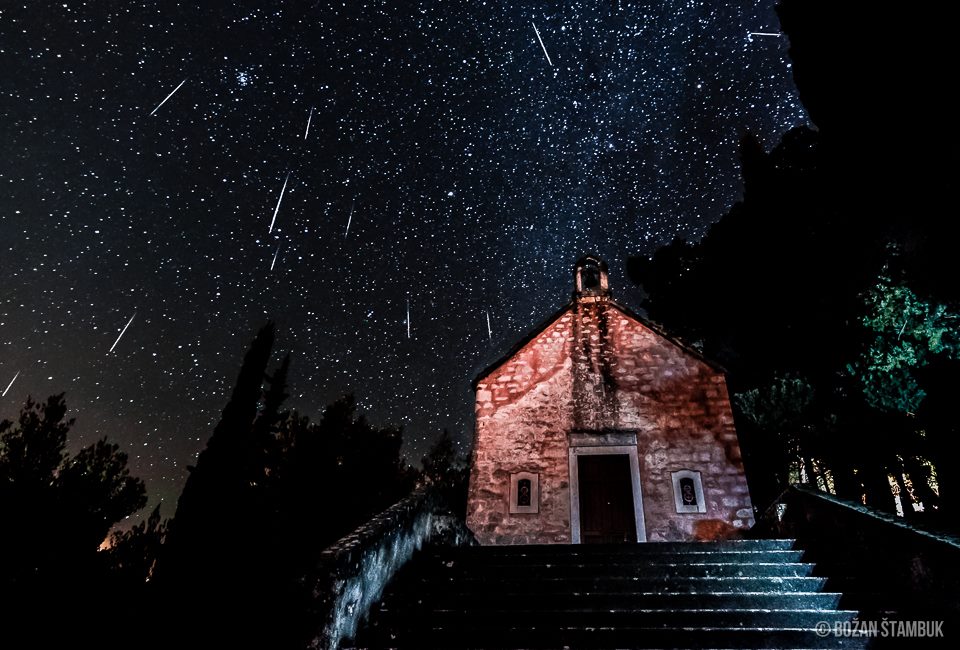 NIght sky and Milky way above Saint Nicholas church atop an abandoned stone quarry (Kruška hill) between Selca and Sumartin, island Brač. The church is located on the Kruška hill, right above the stone quarry, between Selca and Sumartin, with a stunning view of east Brač coast. It was built in the 11th century and is one of the most beautiful old Croatian early Romanesque churches. It stands out with its square dome over the central arch, which is a rarity in the early Romanesque architecture, which separates this monument from the usual method of construction of sacral objects in Croatia 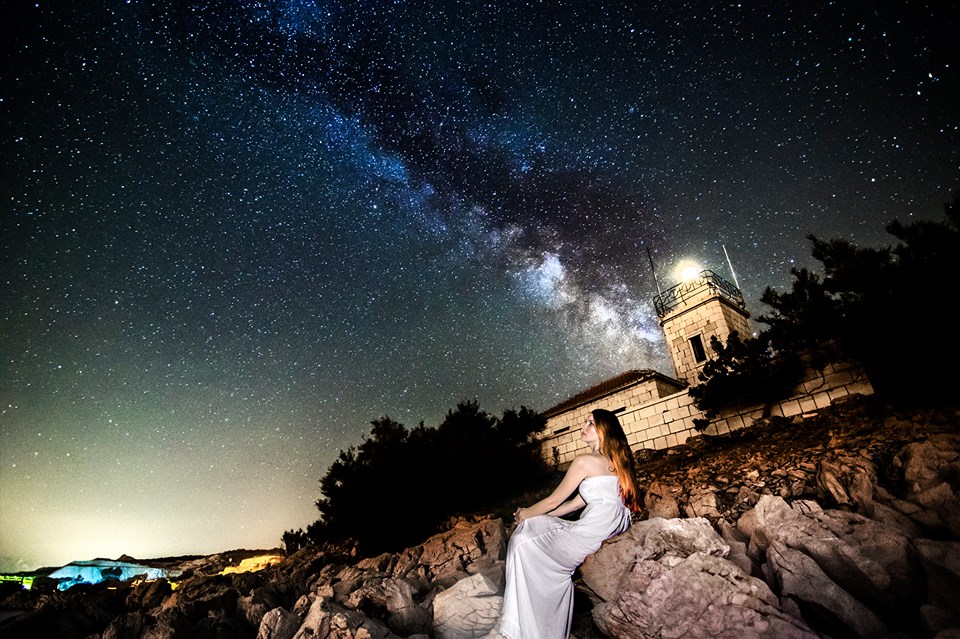 Panorama of the night sky above Zlatni rat beach. Milky way and moonset. Bol, island Brač. Zlatni rat is one of the most famous and beautiful beaches on the Adriatic sea. It’s situated in Bol, on the southern coast of island Brač. It was formed from settling of the fine golden gravel, which was carried by rapids from Vidova Gora, around the submarine ridge, stretching vertically. Due to its unusual beauty, it is one of the symbols of Croatian tourism. In the year 1965. it was protected as a significant landscape

It’s because of all this invested time and effort and unforgettable experiences, this odyssey of mine of more than thousand kilometers during three months forever changed the way I think as a photographer and fortified my love for the island Brač.

All photos by Božan Štambuk. Check out his impressive 4K timelapse video below.