The Greek Catholic celebration of the Holy Trinity will be held in Vrlika, Croatia on May 29, 2021. This is a great event for this small town and for the Dalmatian Vicariate of the Greek Catholic Diocese.

The Greek Catholic Bishop of Križevci is visiting Vrlika after 126 years. After almost 90 years the Greek Catholic Liturgy will be served and 50 years after the demolition of the church the new memorial chapel of Holy Trinity is built.

The Greek Catholic Parish of the Holy Trinity Vrlika was established in Vrlika 1834 when about one hundred local Orthodox joined the Catholic Church. This parish was part of the Dalmatian Vicariate of the Eparchy of Križevci. Greek Cathokic priests were coming to Vrlika from northern Croatia where the Greek Catholic community was numerous.

They were well respected and active members of the local community. In 1883, Don Nikola Segedi founded a choir. During his stay in Vrlika, Don Petar Stanic was a member of Antique Society of Knin and has collaborated with the famous Croatian archaeologists such as Don Frano Bulić and Fr. Louis Marun. Don Đuro Smičiklas, who was priest in Vrlika from 1842 to 1846, later became the Greek Catholic bishop of Križevci.

Don Ilija Malić was the last Greek Catholic priest in Vrlika. He was born on September 15, 1867 in Malići, Žumberak. His family lived with him in Vrlika where he came on May 15, 1893. He lived modestly, because in 1919 he asked the bishop for financial support for his son Milan. He was buried in 1921 in St. Peter and Paul’s Catholic Cemetery in Vrlika. It is evident from the archives of the Eparchy of Križevci that his widow was allowed to remain in the parish house. The only native of Vrlika who became a Greek Catholic priest was don Ilija Gjukic. He died in 1880 in Stojdraga, Žumberak.

On the back of the church was a semicircular apse. In the spring of 1896 a square bell tower was erected with four windows in the form of semicircular arches on each side. Inside the church were twenty-one icons (two throne icons, twelve apostles in eight icons, two icons of the Nativity of the Virgin, Circumcision, St. Peter and Paul, Resurrection, Last Supper, Holy Trinity, Transfiguration).

The Church was repaired several times. In September 1970, roof collapsed during a severe earthquake. In late February 1971, it was demolished by dynamite. Part of the material was used to repair the wall of the local cemetery. In the 20th century, the number of parishioners decreased due to emigration. The last Greek Catholic in Vrlika died in 1952. 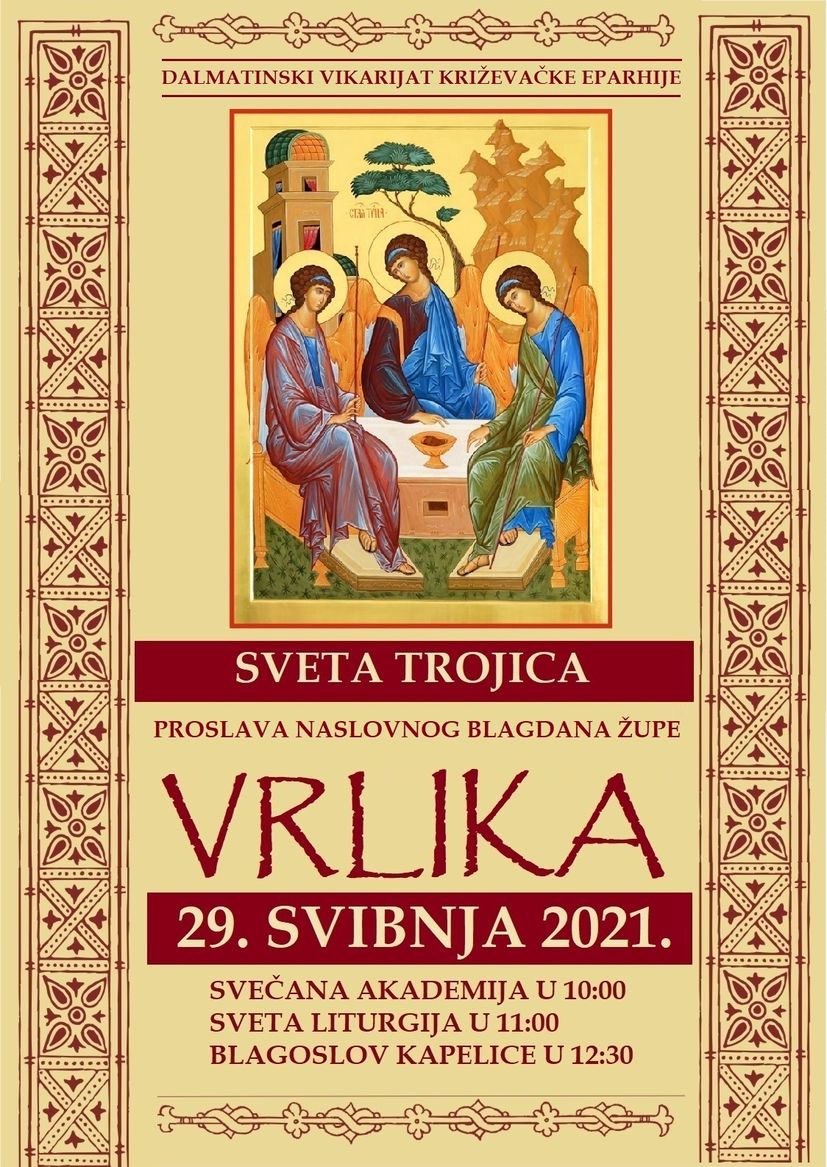 The Diocese of Križevci and the town of Vrlika are jointly organizing a celebration that will begin with a solemn academy at 10 a.m., after which a holy liturgy will be served at 11 a.m. in the Church of Our Lady of the Rosary. Liturgy will be performed by Križevci bishop Milan Stipić.