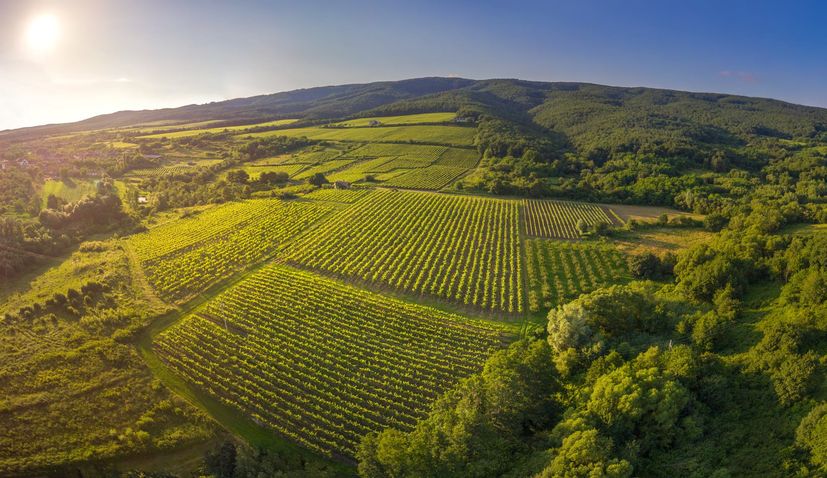 At this year’s Graševina evaluation at the Graševina Festival in Kutjevo, as many as 60 won gold. Wine tourism is the future of this region, winemakers and tourism workers agree.

KUTJEVO, 7 June 2022 – Graševina is the pride of Kutjevo, Zlatna dolina and the whole of Slavonia, and in the best way it promotes the traditional values of this region. Its full potential was proved at the Graševina Festival held this past weekend in Kutjevo.

The high quality of last year’s harvest is evidenced by the fact that out of 125 samples received, as many as 60 wines received gold, and 11 of them won big gold.

The Krauthaker winery was declared the champion of the festival in both categories, young and aged Graševina, for its Graševina Mitrovac.

“We are honoured with these titles, which give us an incentive to further develop this variety, but also winemaking in the whole region. There is still room for improvement, but there are already big changes in quality, but also in permeation with tourism and other branches,” said Martina Krauthaker Grgić, oenologist at Krauthaker winery.

One hundred of the best rated graševina wines could be tasted in the atrium of the impressive Kutjevo Castle, a protected monument of architectural heritage.

“Tasting in the beautiful ambience of this castle is also the best indicator of the synergy between winemaking and tourism. The significantly increased number of arrivals and overnight stays in recent years shows that the future lies in raising the quality of service, increasing the number of accommodation capacities and combining various contents,” said Maja Jakobović, director of the Požega-Slavonia County Tourist Board.

Dino Galić, Member of the Management Board of Kutjevo d.d. winner of the championship title for predicate wine, believes that now we need to use all the infrastructure and synergy in creating additional offers such as various festivals and well-planned activities.

“Kutjevo vineyards have a history and a large number of established winemakers in the offer of top bottled wines, and now we need a tourist presentation since we are not on the route of tourists to the sea,” said Galić.

From fresh and aged to sparkling wines and ‘ledena berba’

The most represented grape variety in Croatia is grateful for achieving a wide range of wine styles – from fresh and aged to sparkling wines and ledena berba (wine made from grapes harvested at a temperature of at least minus 7 degrees Celsius and processed in a frozen state).

“We have achieved great results with our Graševina sparkling wine and Rhine Riesling, but there is still a lot of work to be done here. We all need to recognise opportunities and do everything we can to bring people who otherwise leave here happy,” emphasises winemaker Goran Josipović, whose sparkling wine from 2019 was the best rated.

There are many wineries that can be visited in this area. Apart from the already well-known and most modern Croatian winery Galić in Kutjevo, there are many smaller producers with tasting rooms. Among them are the wineries Jakobović and Perak, where young winemakers are slowly taking over the business of their fathers.

“Our path is in winemaking and continuing the tradition. The Kutjevo vineyards and Graševina have long been recognised, but together we must do more in marketing and branding,” say Filip Jakobović and Ivan Perak.

The association of Kutjevo wineries, the organiser of this wine event, which also included interesting and educational workshops for which more space was sought, is doing the same. Particularly attractive was the most impressive time machine of the history of Graševina, led by Željko Garmaz.

The sensational, unprecedented tasting of 17 archival bottles, the oldest of which was from 1963, showed that Graševina is a wine that does not age.

There was demand for Tomo Jakopović’s workshop on the increasingly sought-after sparkling wines from Graševina, as well as for the Kutjevo workshop of Grand Cru sommelier Darko Lugarić, where special Graševina positions in the Kutjevo Vineyard were presented.

“Our goal was to promote Graševina as the most important and most widespread Croatian vine. By presenting aged graševina at workshops, some of which are almost sixty years old, we showed how potent and long-lasting this variety is and how only Slavonia and the Croatian Danube region can offer such a range of wines in Croatia,” said Krunoslav Sontacchi, president of the association.

The whole area lives with Graševina, and this was also seen at the final event on Kutjevo’s Graševina Square, where a large number of people celebrated with a rich entertainment program and an offer of wine and products from local family farms.

This is also recognised by the growing number of guests who enjoy not only wine but also gastronomy, active holidays, hospitality and the beauties of Golden Slavonia.