I stretched my head out of the window because the balloons took up the majority of the back seat. We were in a unison of cars driving into the Old Town of Dubrovnik, each car with a bow on the rear-view mirror. The repetitive sound of obnoxious honking turned into a distant lull after the first 10 minutes. Tourists stopped in their tracks and cocked their heads in curiosity, wondering what was this scene before them. The locals smiled at us, because they knew.

We all parked and headed into the Old Town, following the man waving the massive Croatian flag. There wasn’t much time to ask questions, so I followed the crowd, who seemed like they had all practiced this previously. The accordion and mandolin were complemented by singing and six-inch stilettos clacking against the polished cobblestones.

Our crowd suddenly stopped and cleared. Tourists gathered from all different directions, pointing and clapping: the groom and bride joined hands on Stradun with the ancient walled city as their backdrop. 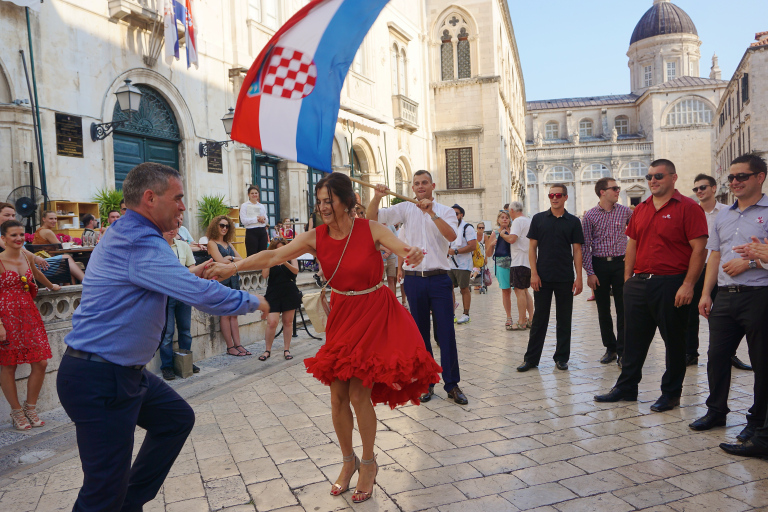 It was my first Croatian wedding, and I happened to be the only American in the wedding party. I couldn’t help but absorb every morsel of this vibrant festivity. Between the Croatian flag and traditional music, I found that marriage was not the only bond being commemorated. Croatian weddings are also a celebration of shared culture, heritage, and history. 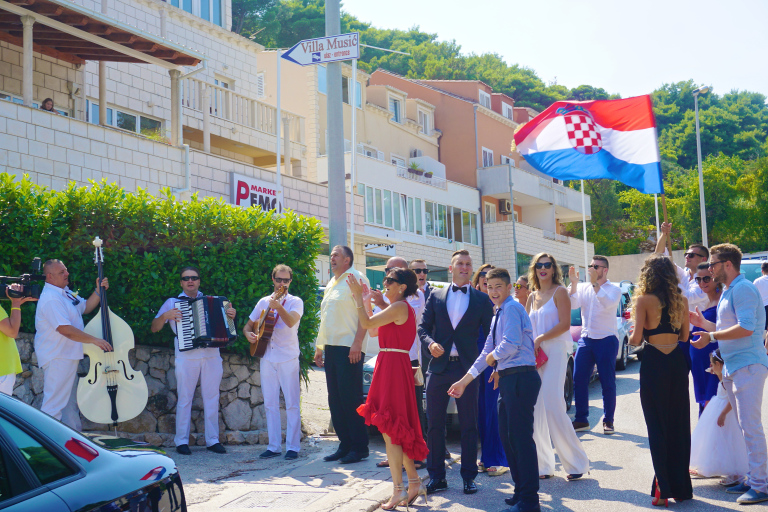 (Marco and Eli are the happy newlyweds, who are both from Dubrovnik. Marco is one of Domeniko’s best friends, and I also met him while studying abroad at Dubrovnik International University. Check out their viral proposal video!) 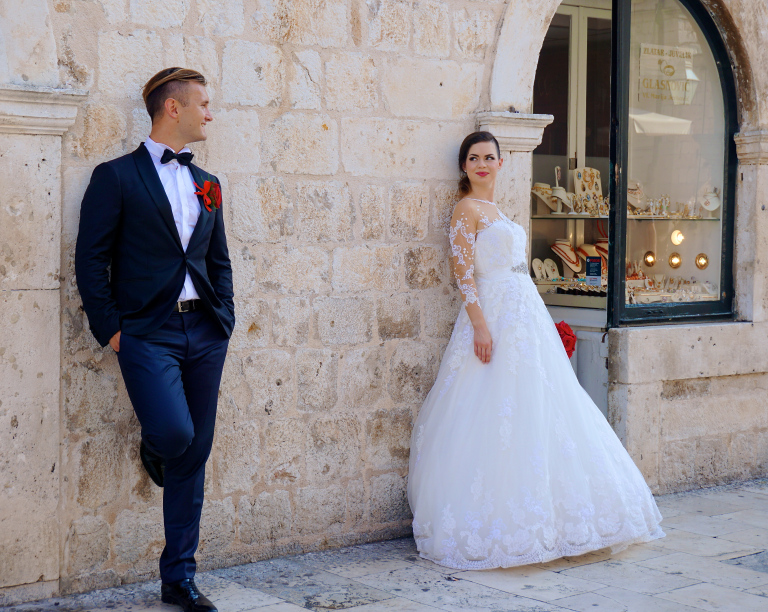 First let me start off by saying that Croatian weddings are a week-long celebration with various sub-events. The ceremony and reception took place on Saturday, but a pre-wedding party at the bride’s house began on Wednesday.

I could hear the music from down the street, and many other Croatians observed from their balconies. The minute I walked in the door I was surrounded by roughly 20 people who were linked in arms while spinning, laughing and cheering. Suddenly I was swept up into the cluster, and before I knew it I was dancing with a stranger.

This was the first time I was meeting Eli, the bride-to-be, yet her and her family immediately made me feel right at home. Within two minutes someone already brought me a drink, and I was kissing the cheeks of the extended family members. 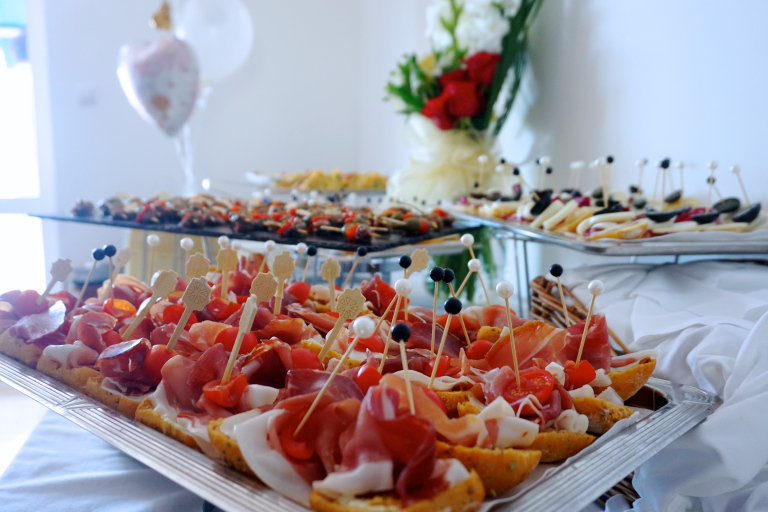 On Thursday night a similar celebration took place, instead at the groom’s house, Marco, with his side of the family. The house was filled with the familiar smell of prosciutto, cheese, and wine while a Croatian band provided the entertainment. Song after song, it seemed like every single person knew the lyrics by heart, except me. I asked Domeniko how to dance to these songs, and he said to just put my hands up in the air and sway side to side. As soon as I did this, everyone started laughing and cheering.

The festivities stretched into the late hours, and had me wondering how these people can keep up. I suppose that’s why they took Friday to rest for the big day. 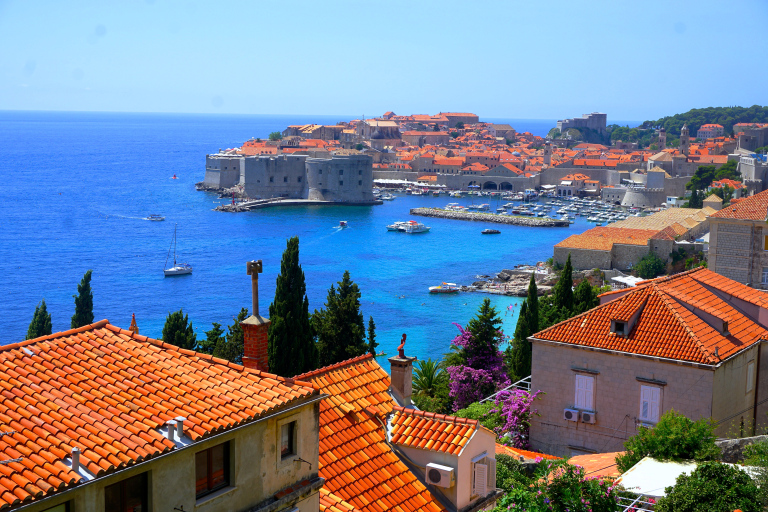 I was told to be ready to leave the house at 12:45 p.m and that we likely wouldn’t be back until 5 a.m. I packed a change of shoes, toiletries, and extra snacks, but somehow didn’t feel at all prepared for the extended adventure in front of me.

Unlike most American weddings, the celebration does not start with the ceremony. In Croatia, it is tradition to visit the houses of the groom’s family and the bride’s family beforehand, a pregame to the Catholic ceremony, if you will.

We started at Marco’s house, and the set-up was similar to the other celebrations with more finger food, traditional Croatian music, and a full bar. The house had a spectacular view, quite possibly the best of Old Town I’ve ever seen. 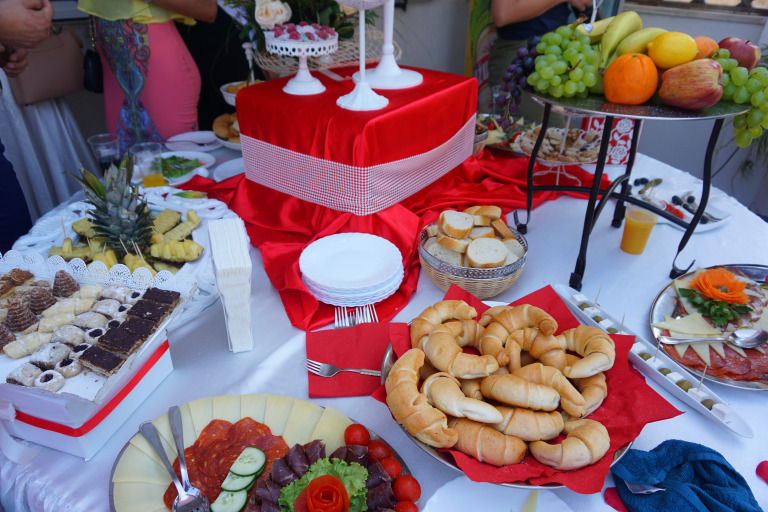 Suddenly the quaint apartment was filled with people who appeared to be going to a red Carpet event. Women were wearing long gowns and cocktail dresses, decorated with eyelash extensions, manicures, and bright lips. It became clear to me that weddings could easily be perceived as a fashion show here in Dubrovnik. I suddenly felt slightly under-dressed in my sundress and beach-wavy hair.

We then moved to Eli’s house, which was already filled with her closest friends and family. Marco went to go see Eli before any of us, which is typical for most Croatian weddings. Meanwhile, a group of men, including Domeniko, waved flares and a large Croatian flag before entering her house (part 1 of 2 of flares in the wedding). Her house was filled with even more food, wine, and people dancing to Croatian music. 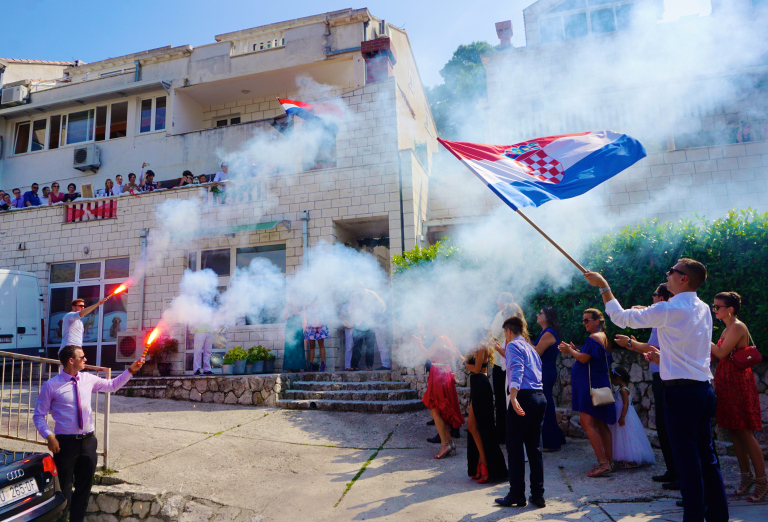 Abruptly it was time to go to the ceremony, and everyone got into their cars like they knew the drill. Leading the pack was the man waving the flag out the car window with a line of at least 20 cars honking, a gesture in Croatia that says “Someone’s getting married today!” We made our way to Stradun for an epic entrance into the Old Town.

The ceremony itself was the shortest part of the celebration, but perhaps the most moving. We gathered inside the church of St. Blaise, which is a monumental symbol of Dubrovnik history. I was mesmerized by the incredible detail of each ceiling crevice while I thought of all the other weddings that must have been here throughout history. Eli walked down the Aisle to “Ave Maria”, and the 40-minute Catholic service was completely in Croatian. I noticed as tourists trickled in to watch from the side doors, but no one seemed to care. 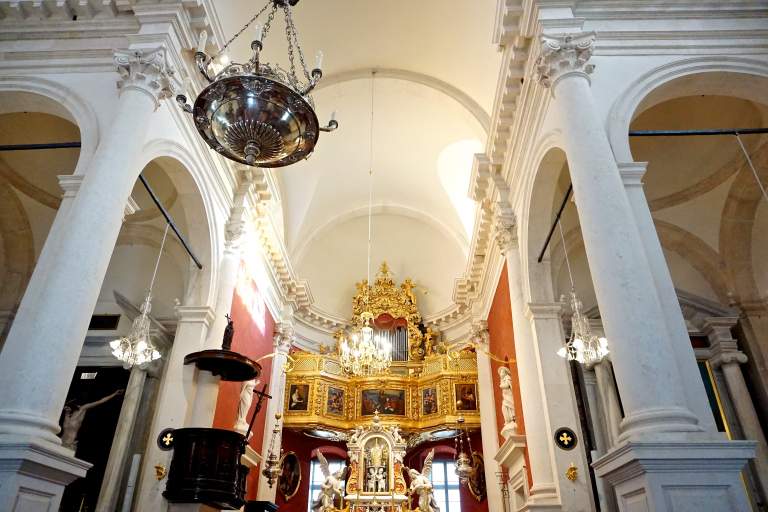 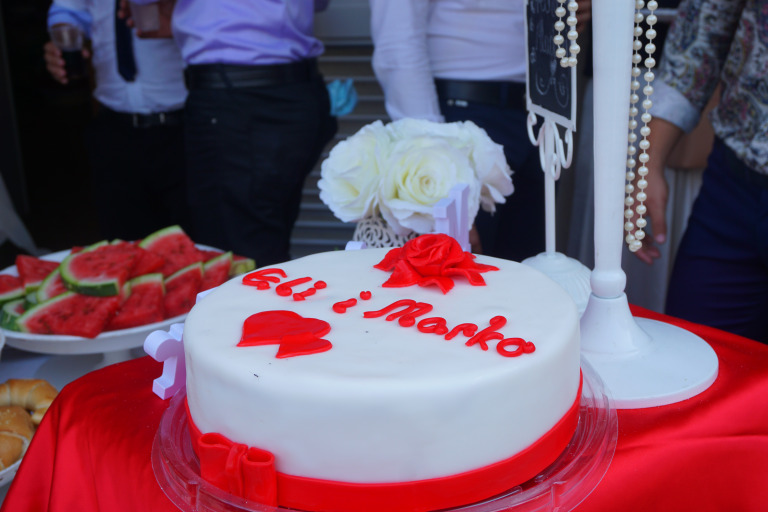 After the ceremony, we joined the rest of the wedding guests by lining up to give our best wishes to the newlyweds. Domeniko told me to kiss the cheeks of each family members and say “cestitam”. Following this was a traditionally epic exit filled with cheering, singing, and part 2 of 2 of the fire sticks. As you can imagine, even more tourists flocked to this sight.

The reception took place at President Dubrovnik, a hotel outside of the Old Town. I put on my comfortable shoes and started the night with a shot of rakija, which is slowly replacing my love of tequila.

I decided to put my camera away from the remainder of the reception. We all gathered for a five-course meal, similar to the setup of many American weddings. However, in between the courses of various meats, cheeses and vegetables, guests would get up and hit the dance floor. I thought for sure that people would be tired from dancing and drinking all day, but alas– these people didn’t stop. A live band with a small stage provided the Croatian music, peppered with a few American classics like “highway to hell.” 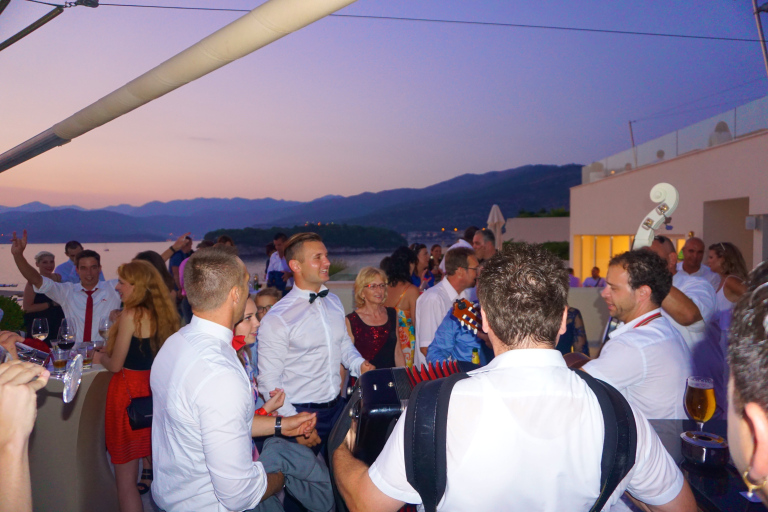 It was past 1:30 a.m by the time they cut the wedding cake, and some children had already fallen asleep. We stayed for the traditional throwing of the bouquet and garter, but we were getting to the point where we couldn’t keep our eyes open any longer. When someone accidentally catapulted a fork at my leg (yes, I was confused too), I decided that was my sign to catch the cab. Dozens of people continued to sing and dance with committed energy, as if they hadn’t been going for over 12 hours. 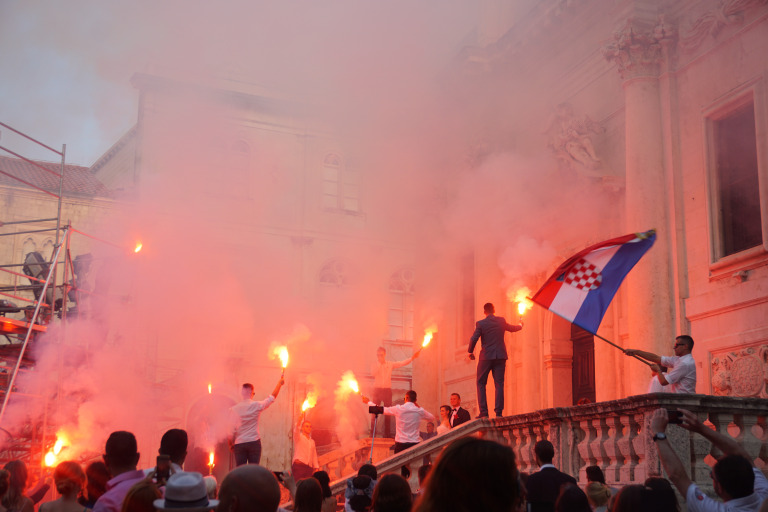 “You must learn Croatian, Alex .”

I’ve never felt such a strong sense of cohesion than I did at this celebration. The Croatian culture is truly one big family, so it is only natural that weddings are a symbol of this unity.

Throughout the festivities I had about five people sternly insist to me: “you must learn Croatian.” At first I didn’t understand why they were saying this to me. I have improved my comprehension and speaking a lot. Couldn’t they at least see I was trying? 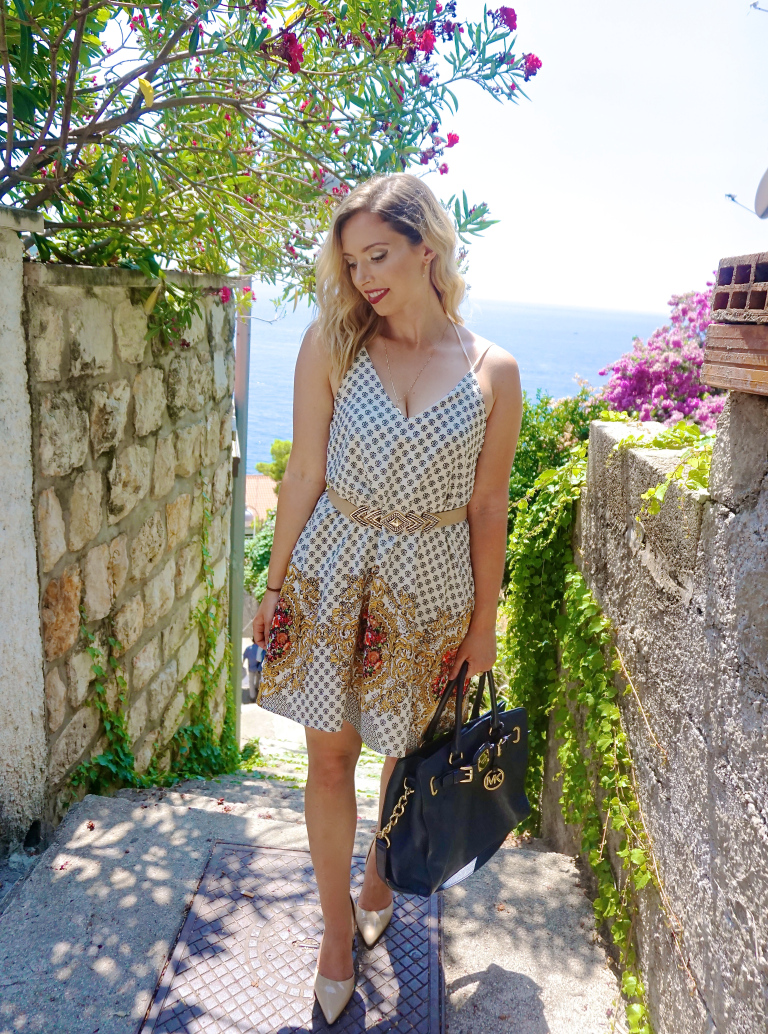 You can follow Alex’s blog The Mindful Mermaid here.