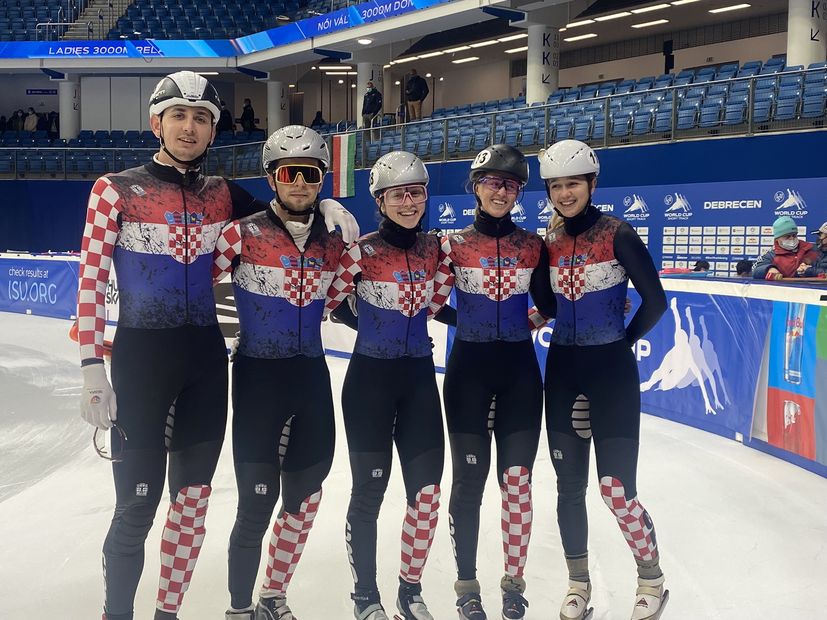 ZAGREB, 10 December 2021 – Yesterday, the International Skating Federation published a list of countries that have qualified for the Beijing 2022 Winter Olympics in short-distance speed skating.

For the first time in its history, Croatia is on this list among just 18 countries that will have their representatives in the women’s speed skating competition.

The qualifying procedure for speed skating is very specific, which is best confirmed by the fact that the official list was published 10 days after the end of the last qualifying competition.

Skaters do not fight for individual placement, but collect common points for their national team, which is why the official list includes only a list of countries, without the names of athletes. This was the reason why the parent club KBK Meteor launched a crowdfunding campaign in order to raise funds for 5 members of the national team to go to qualifying competitions and increase the chances of Croatia’s placement.

The national federations of the countries that have achieved qualification in the next month need to make a decision and announce the names of the skaters who will perform for their countries.

In Croatia’s case, the selection is made by the expert bodies of the Croatian Skating Federation. It is expected that they will choose the best speed skater Valentina Aščić as the Croatian representative, who is also the state record holder in the 500m discipline in which she will perform in Beijing.

The speed skating club KBK Meteor is currently the only speed skating club in Croatia. Out of about 30 members of all ages, seven are senior members of the national team. In an effort to increase Croatia’s chances of qualifying for the 2022 Winter Olympics, the club decided at the beginning of the qualifying cycle to launch a crowdfunding campaign to raise funds to enable the top five members to compete instead of two.

In addition, this enabled the performance of the Croatian mixed relay, which took 9th place in the competition of 20 countries at the World Cup in Debrecen and achieved its best result so far. Due to the short deadline, the club had to borrow part of the money needed to cover the costs. Unfortunately, the costs were too high for the departure of the 4th skater and the performance of the women’s relay, which would have won her a place in the European Championships.

With the maximum placement of 3 male skaters and 3 female skaters of the same national team in individual disciplines, the total quota for going to the 2022 Winter Olympics is determined by the placement in the relays. All of this results in most spots being reserved for “speed skating superpowers” ​​while all other countries are actually fighting for the remaining 4-5 spots. This is exactly what shows the success of this placement of Croatia in the competition of 79 skaters from 26 countries.

The Croatian national team spent the last season in Belgium in joint preparations with the Belgian national team. Good results and constant progress that, despite the insufficient number of available training sessions on the ice, the team has achieved in recent years, have led to this cooperation by which both teams have significantly improved the quality of training.

In addition to senior results, the placement of younger members in the TOP 10 best times in international competitions in their categories, shows that this is not only a temporary success but that speed skating in Croatia has a future.