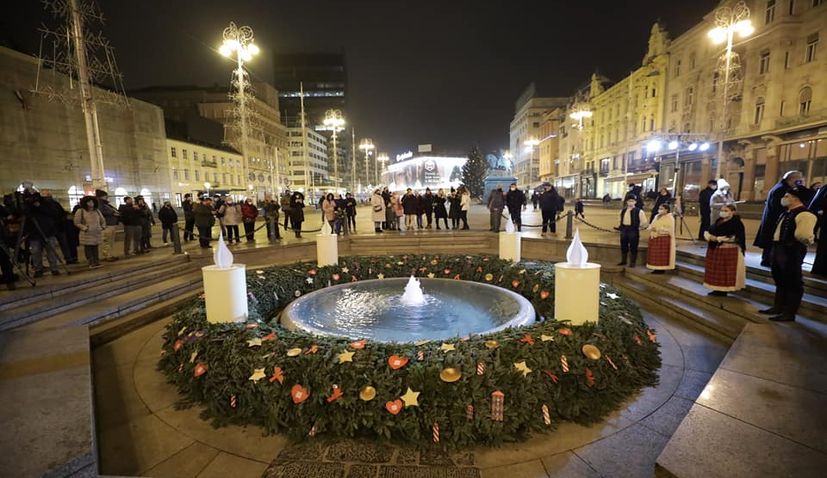 ZAGREB, Nov 28 (Hina) – Zagreb Mayor Milan Bandic on Saturday lit the first candle on the Advent wreath at the Mandusevac fountain in the city centre, with Msgr Zlatko Koren conducting the religious ceremony.

“Fun, culture and gastronomy were only some of the terms used for years to describe our Advent fairy tale but this year it will be different. The year 2020 has been difficult for all of us. The earthquake, the flood, the pandemic… events that at first sight seem insurmountable, yet when we look around us, the truth is slightly different. Stands and stages may not be there, but the extended hands and open hearts of Zagreb residents shine much brighter than any stands,” said Bandic.

The city has been decorated with Christmas ornaments and lights, and a Christmas tree has been put in the central Ban Josip Jelacic square as have a dozen white cottages with products of Zagreb artisans.

Another novelty is the Zagreb nativity scene, that is, an online exhibition of photos of the nativity scene from the period between 2007 and 2020.

The Zagreb City Tourism Board said earlier that in cooperation with a dozen institutions located in Zagreb’s Upper Town it had initiated the decoration of their windows for the holiday season, calling on local residents to join in.

Due to epidemiological restrictions, this year’s Advent in Zagreb event is being held in a much smaller format, without traditional catering services, the ice rink in King Tomislav Square and many other cultural and entertainment events as well as the usual pre-holiday crowds and domestic and foreign tourists.