Croatia started the match exactly how they finished against Turkey last Sunday in Paris, attacking the Czechs at pace. The Czechs, who stacked the middle of the park to try and cramp the Croatians, were under the pump in the opening period as Ante Čačić’s men controlled possession.

It did not take long for the chances to fall Croatia’s way. After a Milan Badelj shot in the 7th minute, Croatia started to pepper the Czechs with crosses as they started to control the game. Croatia had a number of chances to opening the scoring and came closest in the 21st minute when Mario Mandžukić’s cross across the face of the goal just missed the advancing Perišić who failed to get a touch.

In the 36th minute a one-two from Mandžukić and Rakitić freed the Barcelona star down the right whose shot was saved by Arsenal keeper Petr Čech. The large Croatian contingent in the stands did not have to wait long for the deadlock to be broken. In the 37th minute Perišić broke free down the left and let fly in typical fashion with a shot which left Čech helpless as the ball nestled into the left corner of the net.

Croatia could have doubled the lead 3 minutes later when Rakitić and Vedran Ćorluka got in each others way unmarked from 6 yards out following a cross. Croatia maintained control of the match early in the second spell, but a desperate Czech Republic who needed a result to stay in the tournament, started to launch more attacks. Croatia’s defence, led by Ćorluka and the impressive Domagoj Vida, remained sound and managed deal with any potential danger in an efficient manner.

Croatia finally doubled their lead in the the 60th minute when captain Darijo Srna, who returned to the side during the week after attending his father’s funeral, put Rakitić through on goal and the Barcelona midfielder made no mistake with a classy chip over the hapless Čech to make it 2-0.

The Czech’s got back into the game with 15 minutes remaining after Skoda out-jumped Ćorluka to beat Subašić with a powerful header. Croatia could have extended the lead near the end but desperate Czech defending managed to keep the score at 2-1. 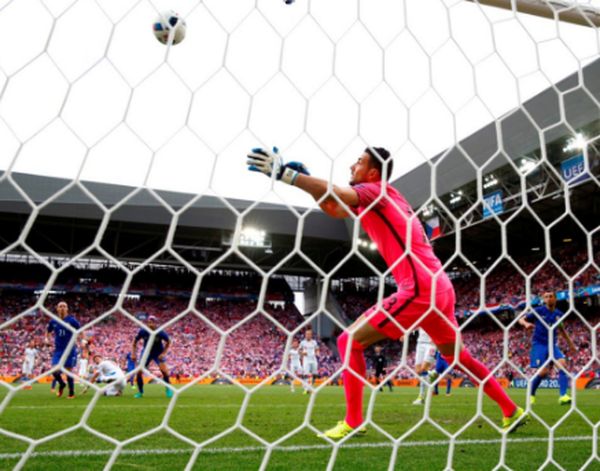 Czechs get back into the match (photo: UEFA)

It then all went wrong for the Croatians after flares started coming onto the pitch from the Croatian end. Referee Mark Clattenburg stopped the match for a number of minutes as order was restored in the stands.

Just moments after the match restarted Croatia’s worst nightmare happened when Clattenburg ruled that Vida handled the ball in the box. Czech substitute Necid made no mistake from the spot to level the match at 2-2.

Čačić’s only injury concern will be with Luka Modrić who limped off with a half an hour to go. Croatia now face Spain in their last group match but will have to wait what UEFA will say about the crowd trouble that stopped the match.