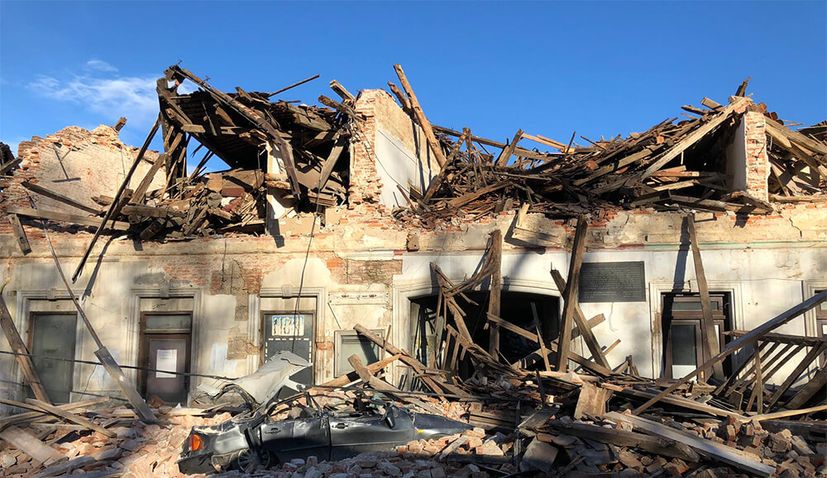 ZAGREB, 15 January (Hina) – Construction Minister Darko Horvat said on Thursday that around HRK 12 billion had been secured through the EU Solidarity Fund, World Bank loans and the state budget for the reconstruction of areas hit by last year’s earthquakes.

Speaking in an interview with the HTV public broadcaster, Horvat said that clear rules on how to organise reconstruction would be published in the Official Gazette within a month from the earthquake that hit Sisak-Moslavina County on 29 December.

He added that the government still did not have a complete financial framework for reconstruction but that so far HRK 12 billion (€1.6 billion) had been secured.

“Some sources are known and some we are still trying to secure. Around HRK 12 billion has been secured – through the Solidarity Fund, World Bank loans, the budget. As part of the National Recovery Plan we will also seek…. grants as well as loans,” the minister said.

The Croatian government earlier on Thursday formulated amendments to the Act on Post-Earthquake Reconstruction, originally intended for the City of Zagreb and Zagreb and Krapina-Zagorje counties, hit by a 5.2 magnitude quake on 22 March 2020, to make the law refer also to the post-earthquake reconstruction of Sisak-Moslavina and Karlovac counties.

The reconstruction of buildings destroyed in the 29 December earthquake in Sisak-Moslavina and Karlovac counties will be fully financed by the state.

Bosnian Croats to finance reconstruction of one institution, houses

Leaders of the Croats in Bosnia and Herzegovina said on Thursday they would finance the reconstruction of one state institution as well as build family houses in the quake-hit areas of Croatia.

This was agreed at a meeting in Mostar between the leader of the HDZ BiH party, Dragan Čović, and local officials from a number of towns and municipalities in the neighbouring country and visiting Croatian state secretaries Zvonko Milas and Nikola Mažar.

The Zagreb-based Solidarna foundation earlier this week reported that it had raised more than HRK 8.4 million (€1.12 million) for Sisak-Moslavina County.

Some of the donations paid into the foundation’s 5.5 Fund have already been used to buy consumables for people affected by the earthquake and the foundation also plans to participate in the long-term reconstruction and recovery of the quake-hit county.

The 5.5 Fund was established by the Zagreb Earthquake Relief civic initiative and the Solidarna foundation after the 22 March 2020 earthquake in Zagreb. At the time, the foundation raised HRK 1.5 million for earthquake victims. It reactivated its fund after the earthquake in Sisak-Moslavina County and its fund-raising campaign is still underway.