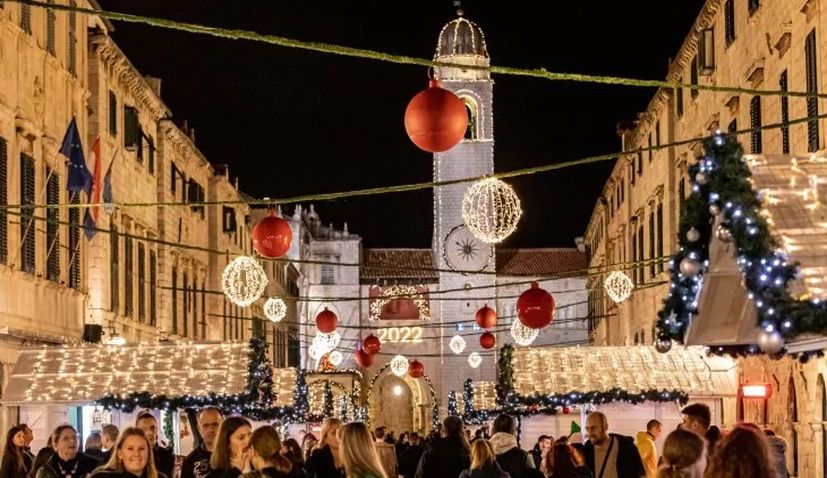 The 9th edition of the Dubrovnik Winter Festival will begin with the lighting of the first Advent candle and the switching on of holiday lights along with a concert by the group Dalmatino on Saturday, November 26.

The Dubrovnik Winter Festival will shine in full glory with a rich program that brings as many as 10 concerts to the Stradun.

After the opening of the festival together with the group Dalmatino, Urban & 4 will perform on December 3, and Doris Dragović will perform on the occasion of Dubrovnik Veterans’ Day on December 6. On December 10, Neno Belan and Fiumensi will host a Rock Gala, on December 17, Opća opasnost will take to the stage, and Željko Bebek will hold a concert for audiences in Dubrovnik on Saint Stephen’s Day, while Massimo will perform on Stradun the day before the New Year.

The highlight of the festival will be the spectacular New Year’s Eve party with Ante Gelo and his band, and one of the biggest musical stars of the Croatian music scene, Petar Grašo, who will welcome in the New Year along with magnificent fireworks display.

The concert offer will be enriched by Advent on Vojnović, organized by the Dubrovnik Student Centre, and for all those who want good music and atmosphere outside the walls, they are preparing performances by Pravila igre, Bosutski Bećar, Matija Cvek, Đanij Stipaničev, Giuliano, Jole and many others.

The Dubrovnik Tourist Board, in cooperation with Dubrovnik restaurants, will organize the traditional Cod Days from December 21 to 24, when in numerous restaurants visitors will be able to taste this traditional holiday gastronomic delicacy cod, prepared in different ways.

Gruž also joins the rich festival offer with the Advent TUP program – pre-Christmas magic in the factory, which will offer various contents such as holiday fairs of good music and fashion, food market, concerts, pub quizzes and numerous workshops for children and adults, organized by the TUP – urban district.

This year, Saturday mornings will also traditionally be marked by performances by the Linđo Folklore Ensemble with a free tourist sightseeing tour of the city organized by the Dubrovnik Tourist Board, while Saturday afternoons will also be reserved for a free themed guided tour called the Golden Age of Dubrovnik organized by Home of Marin Držić. On the occasion of the inclusion of carols in the Register of Cultural Properties of the Republic of Croatia, on December 7, a scientific and professional meeting Eight Centuries of Dubrovnik Carol singing will be held in Lazareti and a multi-location exhibition in cooperation with Dubrovnik Museums, Jelena Obradović Mojaš and cultural institutions.

Numerous children’s programs will delight the youngest residents of Dubrovnik. From the very beginning of the festival, the program is aimed at them, so Santa Claus from Lapland will spend the coming weekend in Dubrovnik, which will be his first stop on this year’s journey around the world, so he invites all Dubrovnik children, as well as small visitors to the city, to bring him their letters to the atrium of the Rector’s Palace and share their wishes for this year at a magical get-together on the occasion of the opening of the ninth Dubrovnik Winter Festival.

The North Pole Station in Lazareti, a colourful winter in the Bay of Lapad with a train that runs every day from 9:00 a.m. to 6:00 p.m. from November 27, and an ice rink that will be open from 9:00 a.m. to 10:00 p.m. on the tennis courts in the Bay of Lapad during the same period, as well as Christmas in Kaboga this winter they are also an indispensable part of the offer for children, for which a number of programs of Dubrovnik’s cultural institutions are intended.

And the content in the city’s largest settlement, Mokošica, will be enriched by the program called Christmas in the Holy Family. There will also be a visit by the Moto Santas, who traditionally arrive on Stradun on December 26, and the Pop-up Christmas Carol (Kolenda) bus, which is always a hit with the children as on board are the ever popular Christmas Bear (Medo), Father Christmas and his elves, and they delight everyone who visits.

On New Year’s Eve, on December 31, the Children’s New Year’s Eve will be held on Stradun, where Ante Gelo will perform with his band, as well as Bruno Oberan, Alen Đuras and Iva Ajduković.

The program will also include special exhibitions, theatre performances for all generations, a cake party with a performance by Domenica, and Christmas concerts, along with the Dubrovnik Christmas concert on December 23, where the soloists Lana Kos will perform alongside the Dubrovnik Symphony Orchestra under the direction of maestro Ivan Hut, Domagoj Dorotić, Marko Tolja and Maja Grgić and the Teatar group.

The Dubrovnik Symphony Orchestra will hold its traditional New Year’s concert on Stradun on January 1 at noon, where mezzo-soprano Marta Hut and tenor Roko Radovan will perform under the direction of maestro Ivan Hut.

Dubrovnik kindergartens and elementary schools will again this year, as part of the Marin Držić Home project, decorate the windows of our city with an Advent calendar on Stradun.

Beautiful backdrops for photography can be found in several locations in the city: the view of Stradun dressed in holiday clothes on Luža is the perfect place for a Christmas memory with the most beautiful view.

Magical photos can also be captured in the Rector’s Palace, and this year there is also a new photo point in the park in Pile: the rich lighting and the snow cover on weekends will provide the right backdrop for a perfect holiday photo!

Given that this year’s FIFA World Cup, which is being held in Qatar, is being played in the winter, as part of the festival, a joint viewing of the performance of the Croatian national team will be organized in front of the Church of St. Blaise. The novelty of this year’s edition of the festival is definitely the reusable plastic cups that can be used for visiting the festive stands, as part of the Plastic smart cities strategy.

More information about all events is available on the website and social networks of the Dubrovnik Winter Festival, as well as on the Calendar of Events of the City of Dubrovnik.