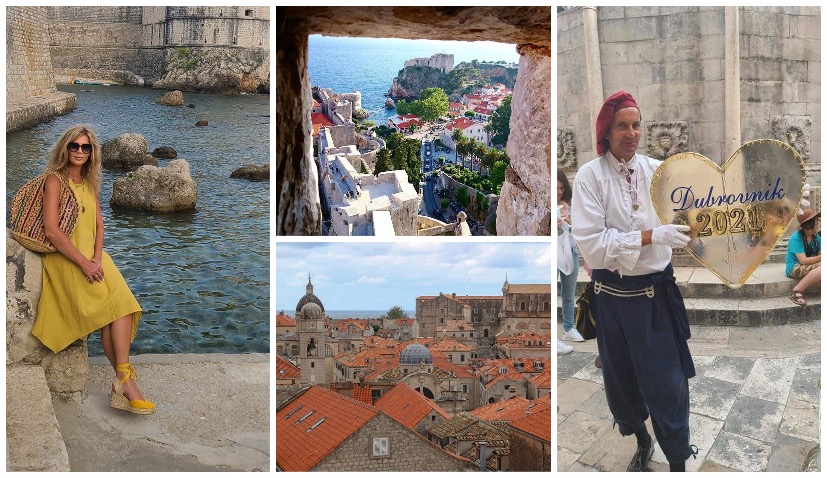 Upon the entrance of the Pile Gate into the fortified city of Dubrovnik, I caught a glimpse of a tall man dressed in traditional Troubadour clothes. Although it was a blistering hot summer day, his clothes looked immaculate; his laced shirt was starched and ironed, and his lacquered shoes polished and shined. He was holding a huge, gold-gilded heart in one hand and a basket full of tiny golden hearts in the other. Our eyes met, and he smiled at me, rewarding me with a huge, friendly grin.

It turns out Mirso had been welcoming tourists for over 20 years at exactly the same place, offering them a warm greeting and handing them little hearts as a welcome gift. The town’s tourist board didn’t employ him, but Mirso’s love for Dubrovnik’s history and his unwavering desire to share it with everyone who steps in the realm of Dubrovnik’s baroque-medieval splendor kept him standing by the Large Onofrio’s Fountain for years handing out carved hearts and retelling stories from Dubrovnik’s rich past.

He webbed us in with the tales of Stradun, its cobbled streets polished and smooth as a glass promenade that runs and divides the old town from Pile Gate in the west to the harbor in the east. Mirso narrated in his husky, almost mysterious tone that during the winter, Stradun is mostly empty and quiet, and one can hear the waves of the sea gently rocking fishing boats that fight for space with local ferries. And then, with a slightly elevated vigor, Mirso seductively unveiled that when summer comes and the hot sunshine rays bask the polished promenade, tables and chairs from the charming local cafes and restaurants spill onto the glassy pavement. 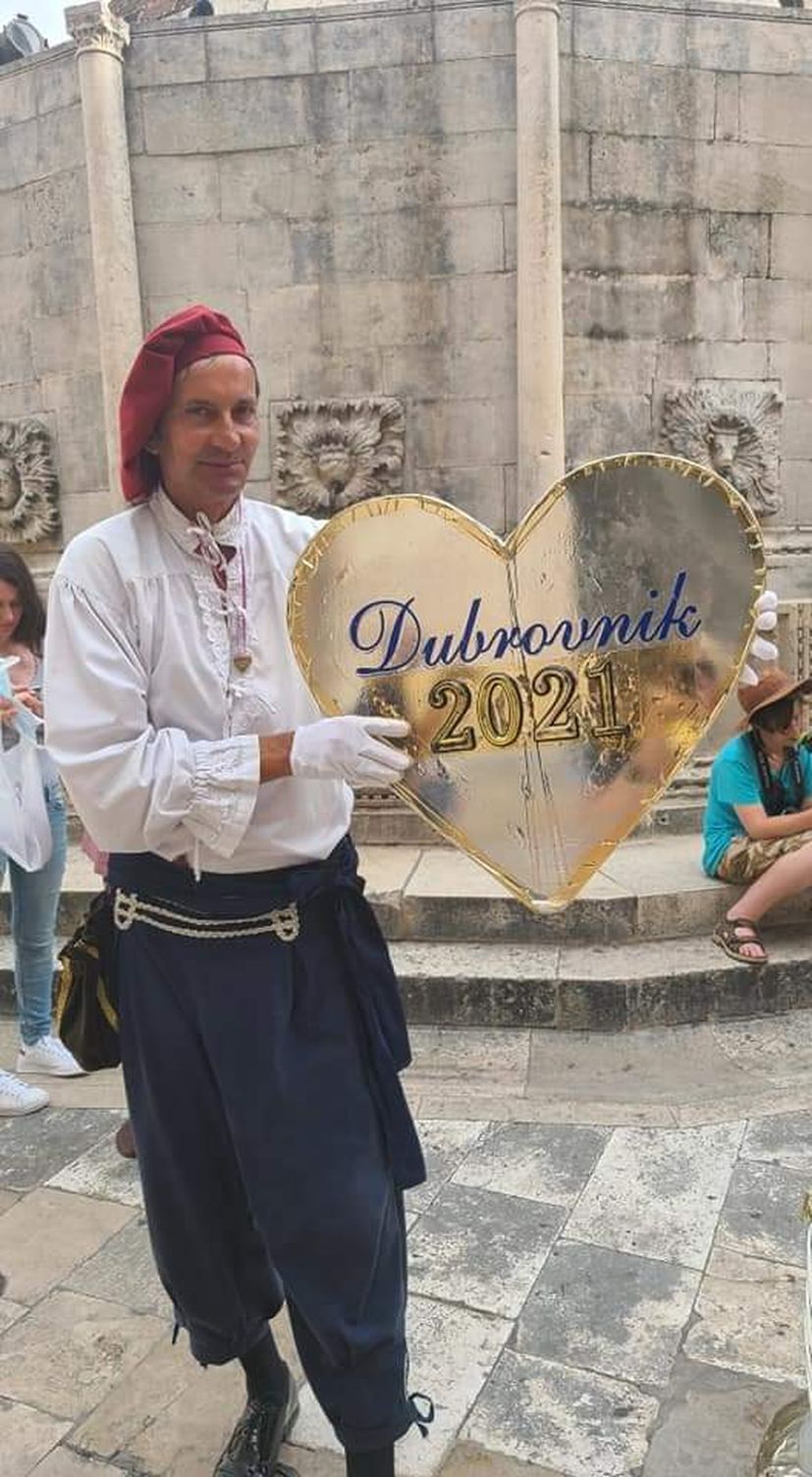 His description was so vivid that I could almost smell the aroma of coffee and local seafood lingering in the air, imagining that there was no better way to spend a cozy and fragrant afternoon than to find an empty table and sit under the colorful sun umbrella nursing a traditional Posip and watching the never-ending crowds of tourists snapping photos and handsome local traders dressed in the traditional folk clothing.

Mirso’s tale evolved into the old heroic fights that had happened on the city walls between mighty sea-faring locals and numerous Venetian fleets and soldiers who wanted to conquer them. Proudly, he declared that historically, Dubrovnik was always a sore topic of conversation in grandiose Venetian palaces whose noblemen desperately wanted to add it to their conquests under the undefeated fleet of the Venetian Republic.

But Venetian aristocrats and mercenaries quickly discovered that the resilient people of Dubrovnik were worthy opponents fighting for their city in order to preserve their freedom and views across brick-colored rooftops, cathedrals, clock towers, and cloisters, all the way up to the craggy inland topped with hills, down to the glistening crystal clear waters of the Adriatic. 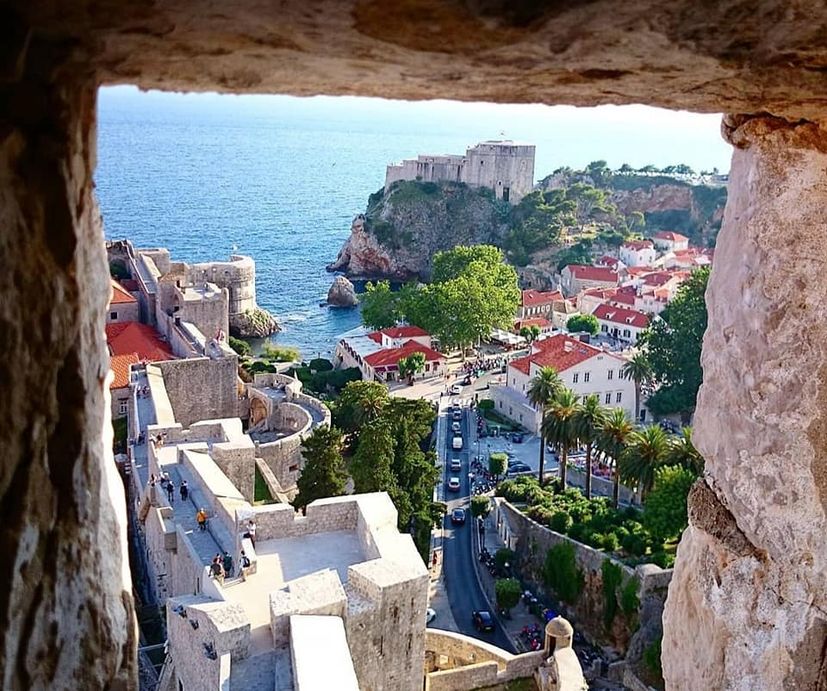 He continued to inform us about a more recent surge of the city’s popularity and the millions of tourists that flock to explore locations of the epic HBO TV series Game of Thrones that were filmed here. As his story was slowly coming to an end, Mirso urged everyone to take a tour of King’s Landing, which not only offered a walking tour of the show but offered insight and intimate glimpses into the lives of the local population. He declared with almost childish mischief that as the walls circle and pass opened shutters, we would be able to peek at neat gardens and witness the daily hustles of the locals by simply following the trails of clothes hanging on the washing lines.

Tourists standing and listening to Mirso jumped at the idea of an unexpected secretive adventure, and after taking a photo with him, hurriedly followed the signs for the tour. I wasn’t in a hurry to follow the crowds just yet, so I waited to thank Mirso for the accidental lesson in history that stirred my thirst to go and explore the town’s flamboyantly rich heritage. 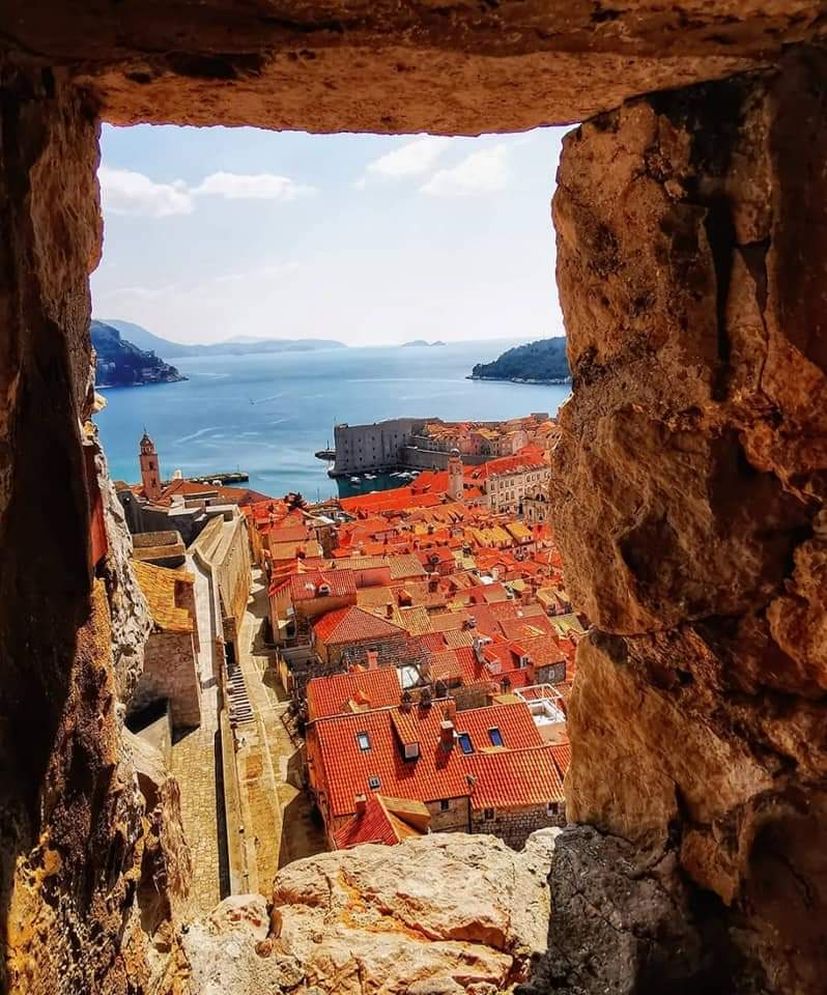 He warmly placed a carved heart in the palm of my hand and nodded. His eyes gleamed with that almost lost and forgotten wisdom of ancient scholars, and I wished I could just plant myself by the fountain and enjoy more breathtaking stories of the brave mortals turned heroes. But the next wave of tourists was pushing its way towards the piazza, so I waved goodbye and headed for the walls, starting to climb what seemed endless steep stone stairs.

The views took my breath away. I couldn’t take my eyes off the city’s brick-colored rooftops that sparkled under the blistering Adriatic sun. Almost everywhere I turned, I saw the light limestone buildings topped with their beautifully distinguished terracotta tiles; graceful promenades packed with aristocratic palazzi; and elegant Baroque churches that were contained within sturdy medieval fortifications. It looked so magical that, viewed from different angles, the whole town looked like a film set.

The climb in the scorching heat felt like a personal conquest. Envisioning myself being Khaleesi looking for her dragons only further fueled my imagination. As I visited the locations where scenes about powerful families playing a deadly game for control of the seven kingdoms of Westeros and sitting atop the Iron Throne were filmed, I found myself completely captivated with the city’s enthralling energy and history that oozed through every pore.

A few hours later, the sun began to fade, and I made my way back to the Stradun with an aching throb in my feet, nothing that a tall glass of cold Posip and a portion of grilled squid served on top of chard and roasted potatoes wouldn’t cure.

Sitting down comfortably, my thoughts turned back to Mirso. What an unexpected blessing it was meeting him. He stirred and awoke my thirst for the olden days and turned me into an explorer for a day. I knew I would be reflecting on this day in the days to come. Frowning at the waiter whose chatty voice interrupted my daydreaming, along with the sound of my rumbling tummy, I recited my order and leaned back in the chair. 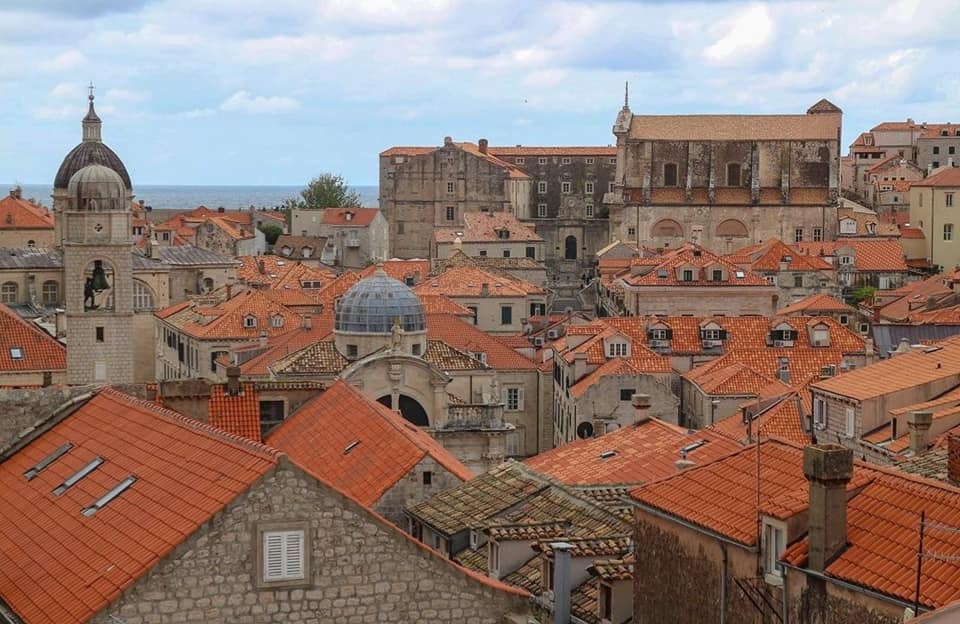 The sunset peacefully painted sea colors of purple and turquoise, disappearing slowly from the view. “What a feast for the eyes,” I thought, but my other senses momentarily heightened as the delicious meal was delicately placed on the table and cold, refreshing nectar was poured in my wine glass.