Home » News » Croatia’s PM: We are sending a new message about relations between Croats, Serb minority 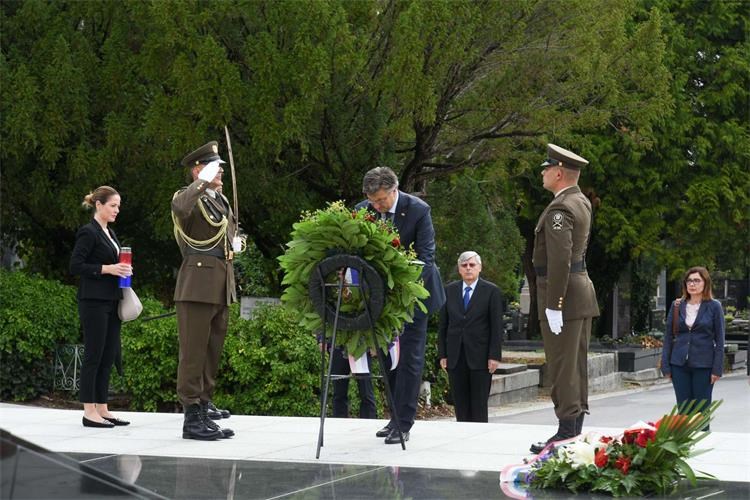 ZAGREB, Aug 4 (Hina) – On the eve of Victory and Homeland Thanksgiving Day and War Veterans Day and the central commemoration in Knin, Croatian Prime Minister Andrej Plenkovic laid wreaths at Zagreb’s central Mirogoj cemetery with the message that the government is paying tribute to all who gave the most for the country’s freedom.

PM Plenkovic, Deputy Parliament Speaker Zeljko Reiner and the head of the prime minister’s office, Zvonimir Frka-Petesic, laid wreaths at the Wall of Pain monument, the Central Cross in the Alley of Fallen Croatian Homeland War Defenders, the grave of Croatia’s first president Franjo Tudjman, and at the common grave of unidentified victims of the 1991-95 war.

Plenkovic said the government especially remembered the operation that enabled the liberation of the then occupied areas and helped create conditions for the subsequent reintegration of the Croatian Danube River region and restoration of Croatia’s territorial integrity.

“That is why I’m glad that tomorrow we will all be in Knin to mark the 25th anniversary of Operation Storm,” he said.

Prime Minister Plenkovic said that it was of crucial importance that 25 years after Operation Storm a new massage was being sent about relations between Croats and the ethnic Serb minority, between Serbia and Croatia, and about what kind of country Croatians are building.

Commenting on the planned attendance of Deputy Prime Minister Boris Milosevic at the central commemoration of Operation Storm in Knin, Plenkovic said that the attendance of a political representative of the Independent Democratic Serb Party (SDSS) at the commemoration was an important signal.

Minorities are an integral part of the Croatian society and their representatives are our legal and political legacy of the past 30 years, Plenkovic said.

As for reports that members of the wartime Croatian Defence Force (HOS) were planning to attend the commemoration wearing T-shirts with the inscription For the Homeland Ready, Plenkovic said the government had been informed of such plans.

“I expect those who are part of the official protocol to wear T-shirts that identify their units that fought in the Homeland War or official T-shirts provided by the War Veterans Ministry,” he said.

Asked if Milosevic’s participation in the Knin commemoration would lead to a policy of better social integration for ethnic Serbs, Plenkovic said that minority representatives, including those of the Serb minority, had been part of the parliamentary majority in the last parliament and that their participation now had been raised to a higher level.

“Based on our mutual trust we will work, as we did in the last term in office, on promoting the equality of all citizens and on making it possible for everyone to live in dignity in line with 21st century standards. Specifically, that means electricity and water supply in isolated communities,” Plenkovic stressed.

As for War Veterans Minister Tomo Medved’s visit to Grubori, where a group of Serb civilians were killed in the aftermath of Operation Storm, and to Serb villages without electricity and water supply, Plenkovic said that it was not a political tradeoff.

“That is an important political and civilisational gesture by the government, showing respect for all victims. We are aware of the faults and crimes that happened in the aftermath of Operation Storm and we believe that it is good to pay tribute also to the Serb victims,” he said.

Asked how much mutual relations were burdened by reactions on the Serb side and by the Serbian president, Plenkovic said that what his government was doing was Croatia’s internal matter.

“We are talking about relations between the government and our coalition partner, the political representative of the Serb minority. We make our decisions for ourselves, for Croatia, and as I have said, they send out the message that 25 years after the war we have achieved all our strategic goals, that Croatia is a democratic country, that it has its institutions and legal order and that it is integrated in the EU and NATO,” Plenkovic said.

A Croatia that is dealing with economic, health, financial and security challenges has the strength to send messages like this one, he said.

“What someone has to say about it is not a top priority for us. What matters to us is what we do for the sake of relations in the Croatian society,” the PM said.

Defence Minister Mario Banozic on Tuesday sent a message to the ministry staff, members of the Croatian Army, police, war veterans and the Croatian people on the occasion of Victory and Homeland Thanksgiving Day and the 25th anniversary of the military-police operation Storm.

Recalling that on August 5, 1995, the Croatian people launched the final effort to make true its centuries-old dream of independence, Banozic said that Storm was a symbol of unity and heroism and the crown of all victories in the 1991-95 Homeland War.

“The key to the victory in the Homeland War were people, brave and bold Croatian defenders who demonstrated Croatian unity, strength and concord,” the minister said in his message, expressing special gratitude to the families of fallen Croatian soldiers and those deceased or gone missing.

“The victorious Croatian Army was built in the Homeland War. Today it is a guarantor of peace and stability and it helps its people when it needs it the most. Today we celebrate peace and freedom in Croatia,” Banozic said in the message.