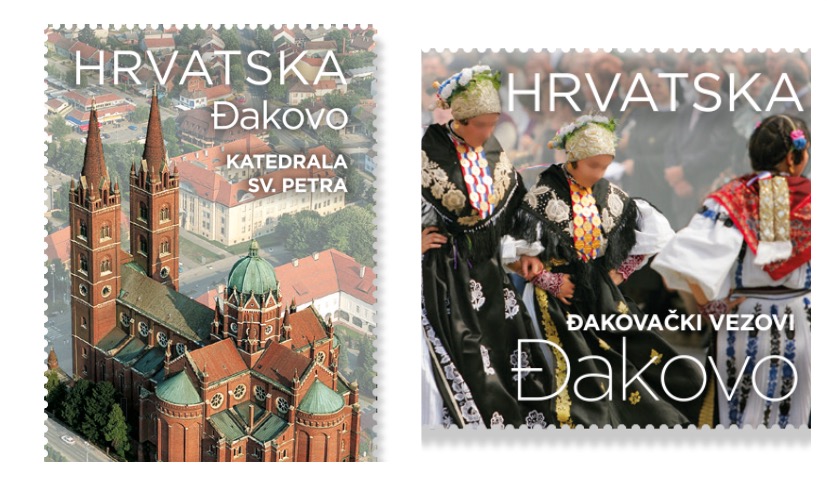 As the most magnificent fruit of the rich Slavonian plain, Đakovo emerges from its heart and rises, touching the sky with the towers of its cathedral.

In the lap of love of fertile land and endless sky, the city of Strossmayer, Lipizzaners and Đakovo embroideries keeps the tradition and heritage of generations alive in the hearts of the inhabitants and in the symbols of its spiritual and material wealth.

Đakovo appears in written monuments in the 13th century, and this area was inhabited in the Neolithic period. The place experienced the beginning of development with the arrival of Bosnian bishops. In 1239, the brother of the Croatian-Hungarian King Bela IV, Prince Koloman, donated the town of Đakovo and its surroundings to the Bosnian bishop Ponsi as the seat of the diocese.

Precisely as an important medieval diocesan center, Đakovo became a city, and as a diocesan city after the Turkish rule, it experienced social and cultural prosperity.

An unavoidable figure in the historical development of the city is Bishop Josip Juraj Strossmayer. A visionary and patron, thanks to whose work and actions Croatian culture, art, science, education and the church have become part of the modern world and European movements, and Đakovo is a beautiful and proud central European city.

Visionary and spiritual greatness are embodied in the life of J. J. Strossmayer in the construction of the most beautiful cathedral from Venice to Istanbul, as Pope John XXIII called it. Good.

The center of the city, the heart of Slavonia, is dominated by St. Peter’s Cathedral. Its bell towers rise like a lighthouse over a plain and shine far and wide with their beauty and spiritual richness.

The Đakovo Cathedral, built from 1866 to 1882, is a monumental masterpiece of neo-Romanesque and neo-Gothic architecture, a magnificent monument of sacred art in which important European and Croatian artists of the 19th century such as architects Karl Rösner and Friedrich von Schmidt, painter J. F. Overbeck, father and son Alexander Maximilian Seitz and Ludwig Seitz, Ludovic Ansiglioni and sculptors Vatroslav Donegani, Ivan Rendić and Rudolf Valdec.

The three-nave cathedral with two towers preserves its value not only in its aesthetic richness but also in its symbolic meaning and rootedness in the region and the people from which it grew. The cathedral was built on Strossmayer’s idea as a link between East and West, and was built by the diligent hands of the people for whom it was intended.

It was built of the land to which it belongs, with seven million bricks, and decorated with Slavonian folk motifs. At the foot of the cathedral towers is one of the most beautiful Croatian squares – J. J. Strossmayer Square – and together with the promenade, the central city street, is one of the most beautiful continental promenades. A walk through the center of Đakovo will provide every time traveler with a little time travel through the history of architectural art styles from Romanesque to Art Nouveau.

Đakovo will offer human warmth in the spiritual sea with the richness of its hospitality, aromas and tastes of gastronomy, events, the warmth of the Lipizzaners and the beauty of the nature of a small paradise in the heart of Slavonia.

Đakovački vezovi, one of the largest Croatian folklore festivals, a festival of song, dance and folk customs, for more than half a century, since 1967, every summer in late June and early July brings together thousands of participants from Croatia and the world. Founded as a cultural and tourist event on the occasion of the International Year of Tourism, today it has grown into a symbol of the heart of Slavonia – Đakovo.

Đakovački vezovi have long since surpassed all that can be a traditional manifestation of folklore: today we have before us a ceremony on the basis of which new generations of admirers of cultural treasures are growing. Đakovački vezovi (embroideries) live in the hearts of all those who see them as a symbol of Croatian identity, tradition and love for folk art.

The Đakovački vezovi folklore festival is an event that includes numerous programs where you can enjoy the beauty of folk customs, costumes, songs, dances, handicrafts and gastronomic specialties.

The central, most beautiful part of the event is traditionally held on the first weekend in July. Then many visitors from all over Croatia and the world can experience the invaluable wealth of national heritage, and the inevitable and most visited programs are the grand opening, a procession of participants through the streets of Đakovo and the closing program called “Slavonia, noble land”.

After half a century of existence and continuous dealing with the national treasure, Đakovački vezovi have become the central cultural and tourist event of the City of Đakovo and the whole of Slavonia.

The cultural and tourist value of Đakovački vezovi has been recognized at the national and international level, as evidenced by numerous awards given to the organizers – the City of Đakovo and the Tourist Board of the City of Đakovo.

Among numerous awards, Đakovački vezovi carry the Charter of the Republic of Croatia for exceptional contribution to the preservation and nurturing of Slavonian traditional heritage and the promotion of Croatian national culture and identity, and for years has continuously carries the TOP event symbol of the Republic of Croatia, which together with financial support is awarded by the Croatian National Tourist Board.

Đakovački vezovi preserve and nurture cultural treasures that have been recognized by UNESCO. The list of world cultural heritage includes ljelje, which are one of the symbols of the Đakovački vezovi, and the Slavonian Bečar, who conveys folk wisdom and memories with his song, and without which there is no Đakovački vezovi.

Đakovački vezovi always offer the most valuable thing – hospitality and hospitality of our generous Slavonia and the warm heart of Đakovo, and the Slavonian soul is as wide as the plain, so there is room in it for every dear guest.

On June 2, 2022, Croatian Post will put into circulation two new commemorative postage stamps from the “Croatian Tourism” series featuring the symbols of Đakovo.

The facade of the Đakovo Cathedral and the Đakovo vezovi event are the motifs of this year’s series of commemorative stamps designed by Dean Roksandić, a designer from Zagreb. The authors of the photographs are Mario Romulić and Dražen Stojčić, photographers from Osijek. 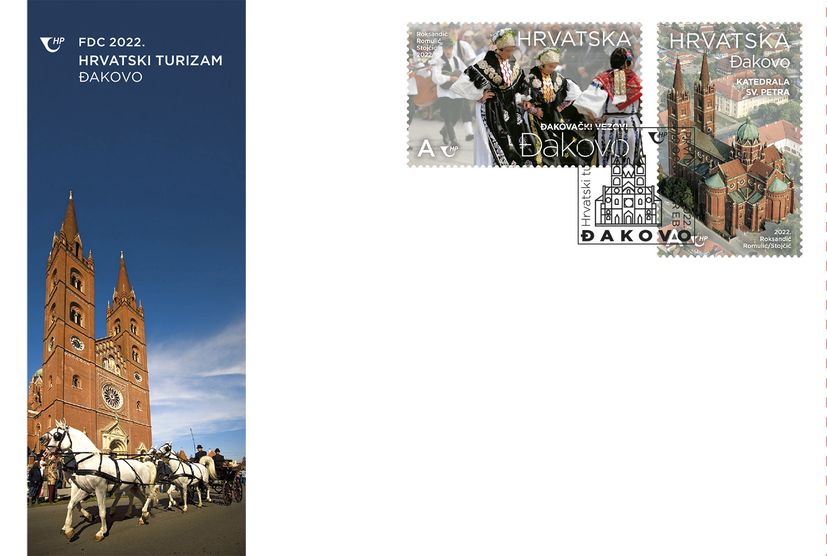 The circulation of the stamps is 30,000 copies per motif and they were issued in sheets of 10 stamps. The Croatian Post also printed a First Day Cover (FDC).