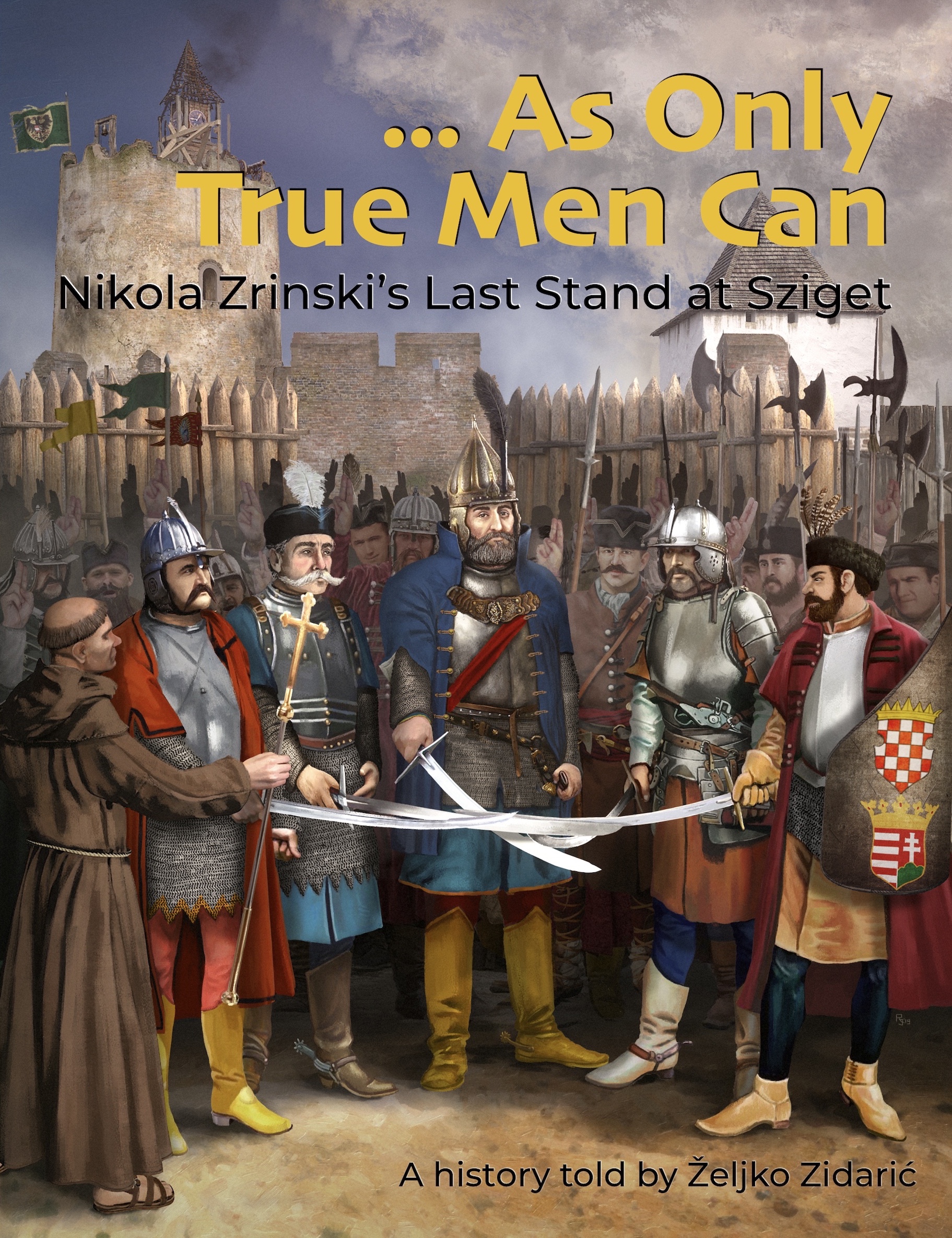 As Only True Men Can cover

The heroism and love of homeland and self-determination of the 16th century Croatian nobleman and general, Viceroy of Croatia when Croatia was part of Austro-Hungarian Empire, Count Nikola Zrinski (also known as Nikola Subic Zrinski and Nikola Zrinski of Sziget) (1508 -1566) are well entrenched into the glorious history of Croatian people.

Although Nicholas fought valiantly against the Ottomans for years, it was his heroic death that made him a cherished European Christian hero. The Battle of Sziget (Szigetvár) is also known in history as the battle that saved civilisation.

His heroic death in Sziget deeply impressed upon his contemporaries. The cultivation of the cult of Nikola Zrinski emerged among Croats and Hungarians as well. In the first half of the 18th century, Nikola Zrinski became the protagonist of Jesuit school dramas, especially in Upper Hungary (present-day Slovakia), where he was celebrated as a model of a faithful and sacrificial warrior in the service of his ruler.

At the beginning of the 19th century, his role as a defender of Christianity was emphasised. The ideologist of the Slovak national revival Ján Kollár saw in Nikola Zrinski a Croat and a Slav who saved Europe from Islamic danger. At that time, one of the new squares in Zagreb was named after Nikola Zrinski, and also some other cities, such as Koprivnica and Krizevci, named their squares after the Sigetian hero. The same year, Catholic priest, historian and later first rector of the University of Zagreb, Matija Mesic, published the first Croatian history book on the Szigetian hero. For Stjepan Radic (Croatian politician who galvanised Croatian peasants as a viable political force in the fight against unionism with other states for a Yugoslav Kingdom and shot by Serb radical in the parliament in Belgrade 1928) Zrinski was a symbol of Croatian identity.

This month in 2019, Zeljko Zidaric, a Canadian Croatian has published in Kindle version his book on Nicola Subic Zrinski titled “… As Only True Men Can: Nikola Zrinski’s Last Stand at Sziget”. Zidaric dedicates his book “To the heroes of Croatian Homeland War 1991-1995.”

When asked this week what motivated him to research Nikola Zrinski, Zidaric replied: “I have not always been interested in history. Namely, Canadian history is very boring, it all revolves around British imperialism and genocide against the indigenous population. My village in Croatia is three times older than Canada. But until recently, I was not interested in Croatian history either, because there is simply not much available here, not even on the Internet, and especially in English. One of my favourite books now is The History of the Early Croats, written by Ante Mrkonjic, a Croat from Australia. I started this project when I started writing a book on business management. While researching the subject, I happened to come across speeches Zrinski gave to his people – at the beginning of the siege and at the end. I was stunned by his words. I began to research as much as I could about it, learned about the siege, Suleiman, the Habsburgs, examined the entire Zrinski family. I was fascinated by the stories of our heroes from the past, all the more so because when I was growing up, such stories were not available to me and I could find out almost nothing about my ancestors. So, I decided to write a book, the kind I wish I had when I was young.”

As to his favourite aspect of his story on Zrinski, Zidaric said the following for the Croatian mainstream newspaper Vecernji List: “Its essence is that it is a story of honour, integrity, faithfulness, courage and selfless sacrifice. Of course, it’s clear to me that the story is romanticised, but what I appreciate most about Zrinski and his men is that they were real examples of nobility and heroism. Even in the end, when the hope of salvation was gone and they knew they could not last longer, they chose an honourable death rather than surrender. Today’s men, by comparison, have no sense of duty, honour or courage. That story is a bit like the story of David and Goliath – we, as a smaller and weaker army, did something incredible in the face of a force like Suleiman. We endured and did not surrender, and although we failed in our plan, we succeeded in significantly weakening the Sultan’s forces. Our story about Siget is much more interesting than, for example, the story of the Alamo, which Americans inflated incredibly. They are good at marketing but also telling stories. We have a real, big story – why don’t we tell it? I want the world to know that Croatia is not some ‘terra incognita’ of European history.” About the book by Zeljko Zidaric:

“On August 1, 1566, as Sultân Süleymân marches toward Sziget, with an army of over 120,000 soldiers, Castellan Nikola Zrinski speaks to his 2,300 soldiers and promises to them: “I, Nikola Zrinski, do solemnly swear, first of all to Almighty God, then to his Majesty, our glorious king, to our tormented suffering Homeland and to you, my valiant knights gathered here with me, that I will endure with you all that happens, whether good or bad. I will never abandon you. I will fight and suffer by your side, and together we will either win or die. So help me God!”

On September 7, 1566, after almost 7 weeks of brutal siege, Nikola Zrinski speaks to his soldiers once again, but now there are a meager 180 remaining, with no hope left for victory. With only two options available, surrender or death, Zrinski says to his men: “I will not dishonor the oath I swore at the start… I have lived free and I will die free! Therefore, I want to be the first to go, in front of you, and you will follow me. What I do, you do the same – as only true men can. Believe me, my beloved brethren, even unto death I will never abandon you!”

This is the story about what happens between those two speeches, August 1 and September 7, when an unstoppable force (Sultân Süleymân) hits an almost immovable object (Nikola Zrinski) at the fortress of Sziget, on the borderlands between Europe and the invading Ottoman Empire, in 1566. The bravery of Nikola Zrinski and his soldiers, brave underdogs fighting against an overwhelming force, can be compared to heroes such Leonidas fighting to protect Greece from the Persian invasion at Thermopylae, and William Wallace protecting Scotland from English conquest. The story is more interesting and important than the story of William Travis at the Battle of the Alamo in Texas. The story of Zrinski making a stand against Süleymân at Sziget is on par with the stories of Leonidas, Wallace, and Travis all merged into one.

Of Nikola Zrinski and the defense of Sziget, was said:

Cardinal Richelieu, statesman and minister to King Louis XIII,
called the Siege of Sziget: “The battle that saved civilization.” and also wrote: “A miracle was needed for Europe to survive, and this miracle happened at Sziget. The question was decided at Sziget whether the cross or the crescent would leave an indelible mark for centuries on the major parts of Europe.”

The Ottomans, who fought against Zrinski, also respected him. Ottoman historian İbrahim Peçevi wrote: “The master of the fortress, Nikola Zrinski, was a notorious kâfir (infidel) with a great reputation for his heroism.”

While numerous historical accounts of the siege exist in the Croatian, Hungarian and Turkish languages there has been no definitive story in English, until now. After almost three years of research and fitting together details found in a multitude of sources the story is now told in richer detail than told in any language to date. This story, like an old damaged painting, required some repairs to convey the magnitude of the siege and make the story more engaging but a high level of historicity is maintained by ensuring that the creative elements align with the spirit of the event and time. This story might at first glance, due to the story format, appear to be historical fiction but it is very much non-fiction.”

As Only True Men Can