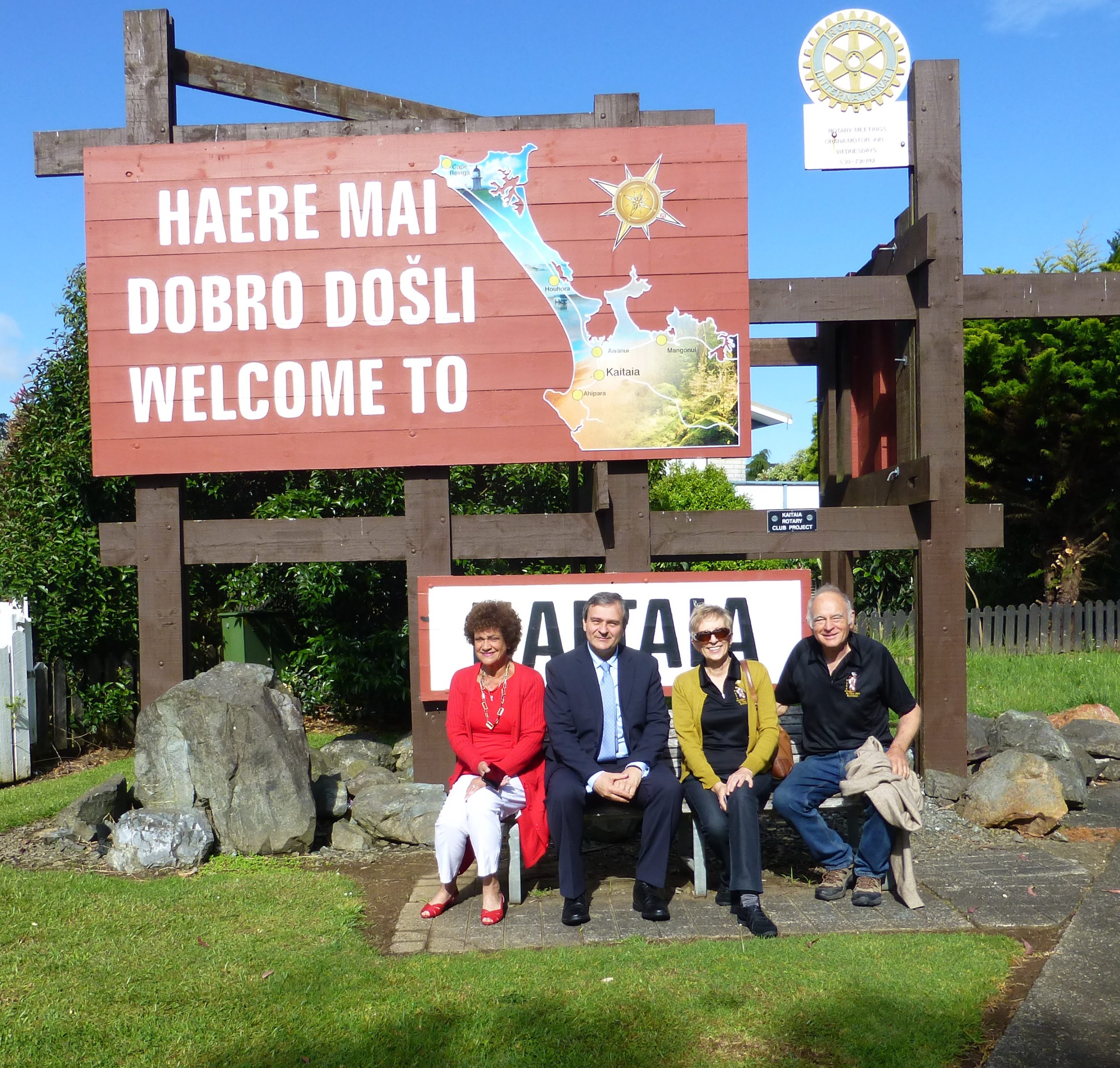 Croatian Ambassador for Australia and New Zealand Dr. Damir Kusen has just made a three-day visit to the Far North of New Zealand to meet with local government officials, members of the Dalmatian community and sites associated with the migration of Croatians from Dalmatia to the Far North.

His visit began with meeting the Mayor, Hon John Carter QSO, councillors Mate Radich and Adele Gardiner. Then he was met by a group from the Kaitaia Dalmatian Club to take him north to an authentic kauri gum digging site, the Gumdiggers Park.

At the park, he was met by the chairman of Kaitaia Dalmatian Cultural Club, Mr. Joe Milich Joe’s wife Marge, and the owner of the Gumdiggers Park, John Johnson. 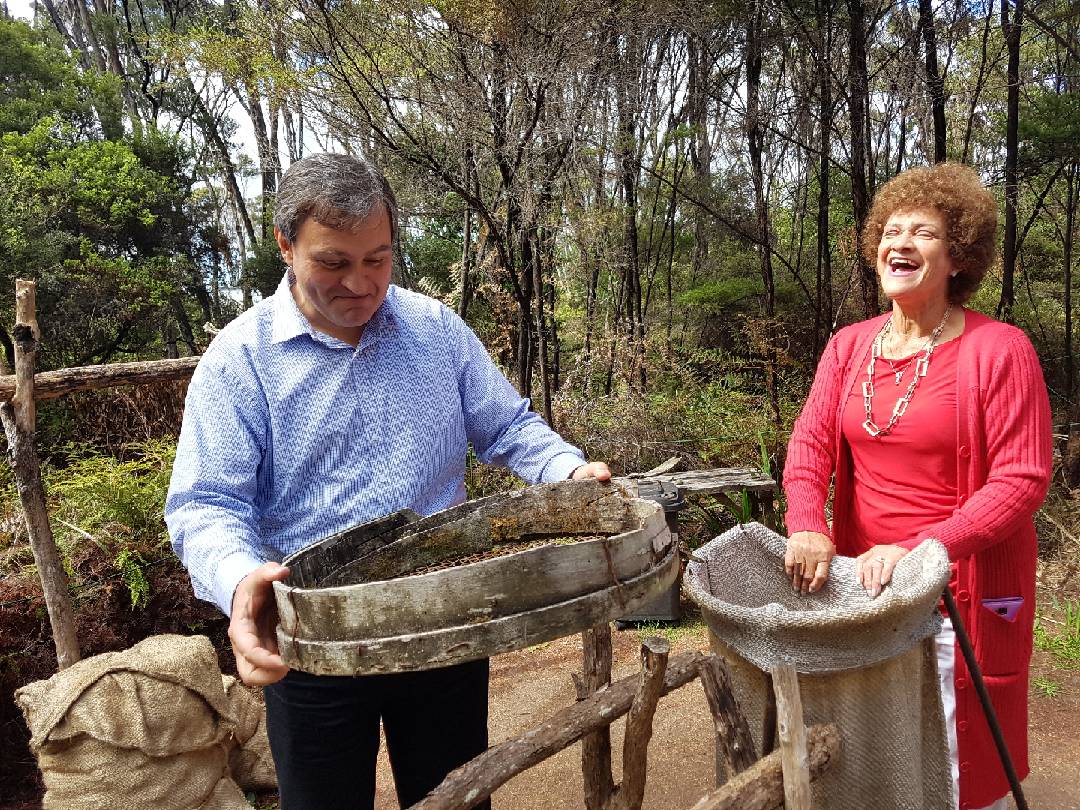 Dr Kusen using an old gum sieve, with Joyce Vinac. Gum sieves were used to grade the gum and shake the dirt off (Photo: Northland Age)

Together with the group they enjoyed a leisurely walk, following tracks past long forgotten gum holes and replica gumdiggers living accommodations. They were shown a video John has prepared explaining how the kauri trees were buried by a cataclysmic prehistoric event. It went on to explain how in the early 1900s, gumdiggers recovered the resin from the trees. 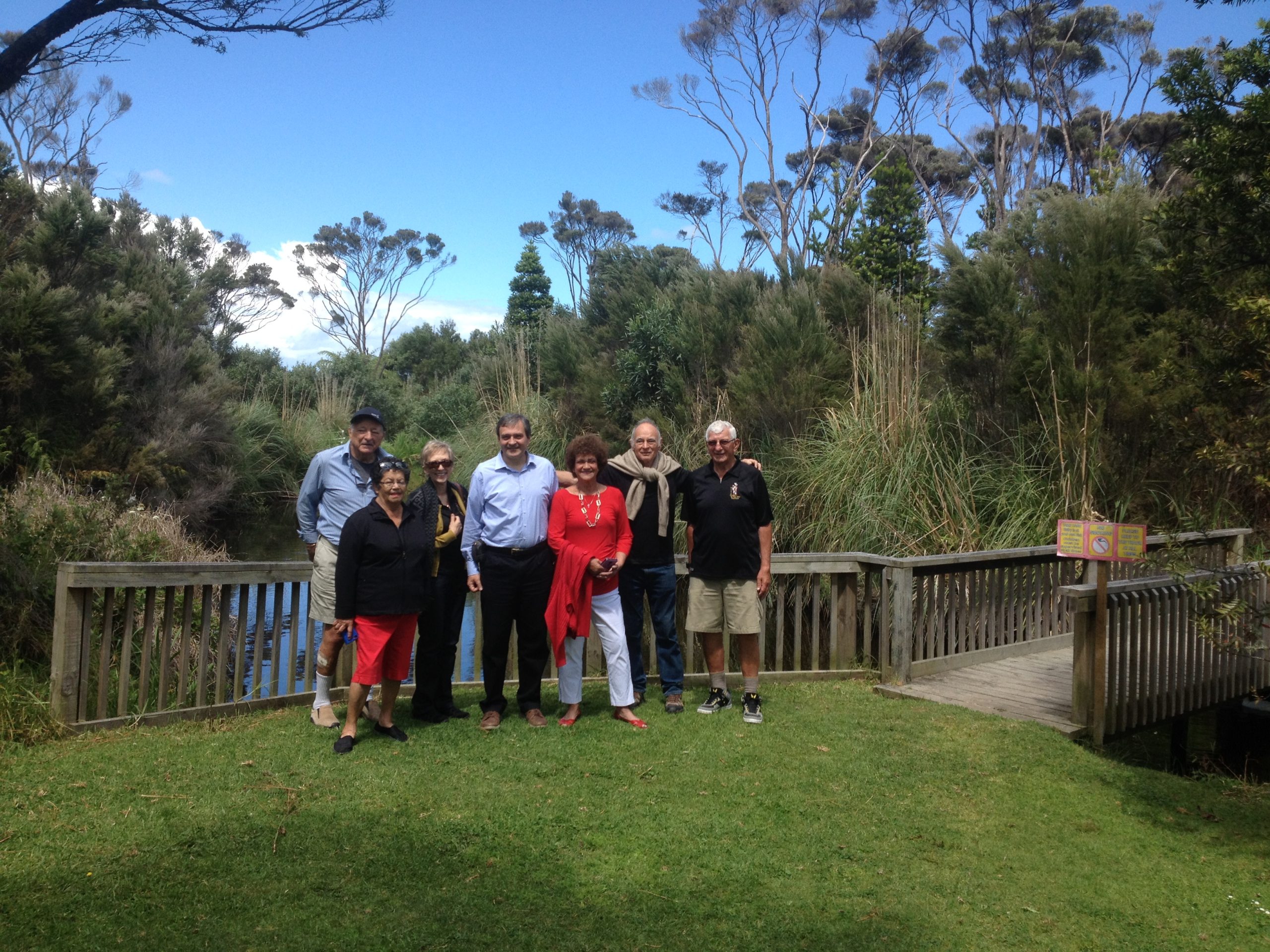 The resin/gum was exported to make floor varnish. The Gumdiggers Park is a remarkable place which gives insight to visitors, of conditions and the difficulties the pioneer settlers faced in those early days. Dalmatian pioneers came to the Far North of New Zealand almost 160 years ago, it was their starting point, the cradle of Dalmatian settlement.

After the Gumdiggers Park, the group made a stop at the Waiharara Catholic Church where Dr. Kusen was shown a memorial to the Pioneer Dalmatian gumdiggers. 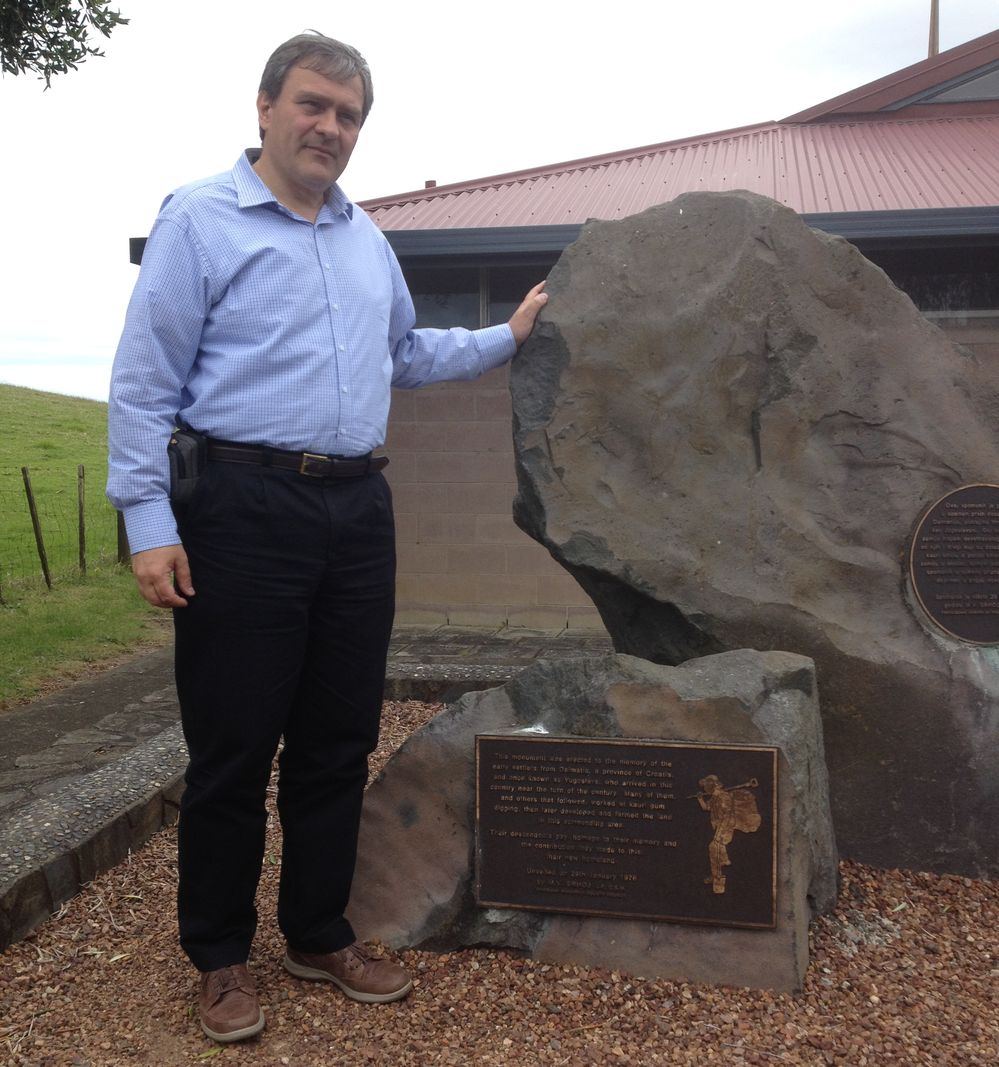 Dr Kusen at a memorial to the Pioneer Gum diggers, outside the Waiharara Catholic Church.

They then went on to the Ancient Kauri Kingdom, recently renamed Kauri Unearthed to see a magnificent kauri staircase, carved from a large kauri tree trunk more than 40,000 years old. 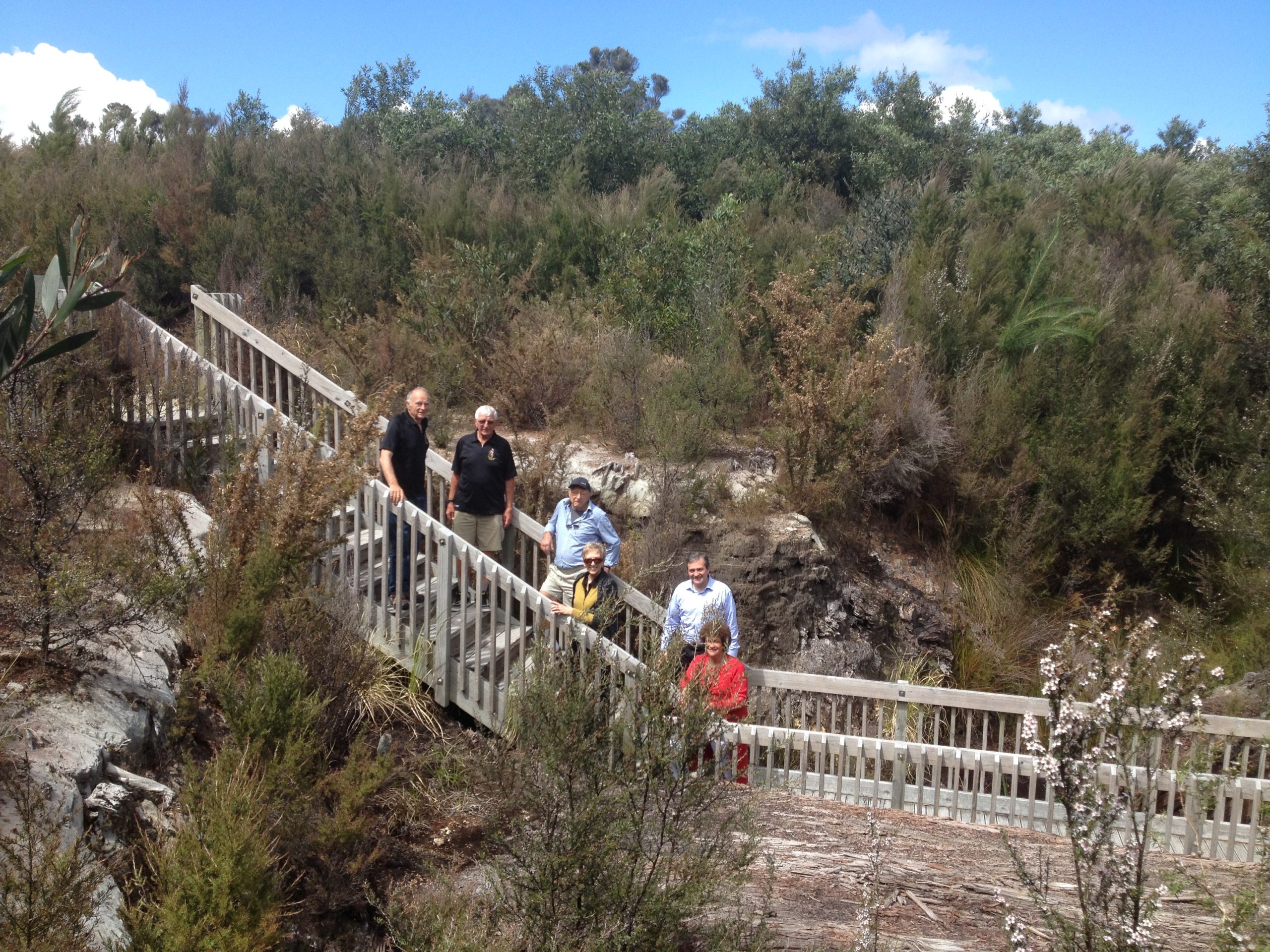 While the group were visiting these places of interest other club members were preparing for an evening celebration, their annual dinner with kolo dancing and entertainment.

At 6.30pm two dance groups, 12 in a junior group and a teenage group of 20 dancers performed to the enjoyment of a large crowd. Singer Jone Yelcich entertained with an arrangement of music and his special performance of his “Gumfields” song. It was a great evening with an enjoyable meal for all who attended. 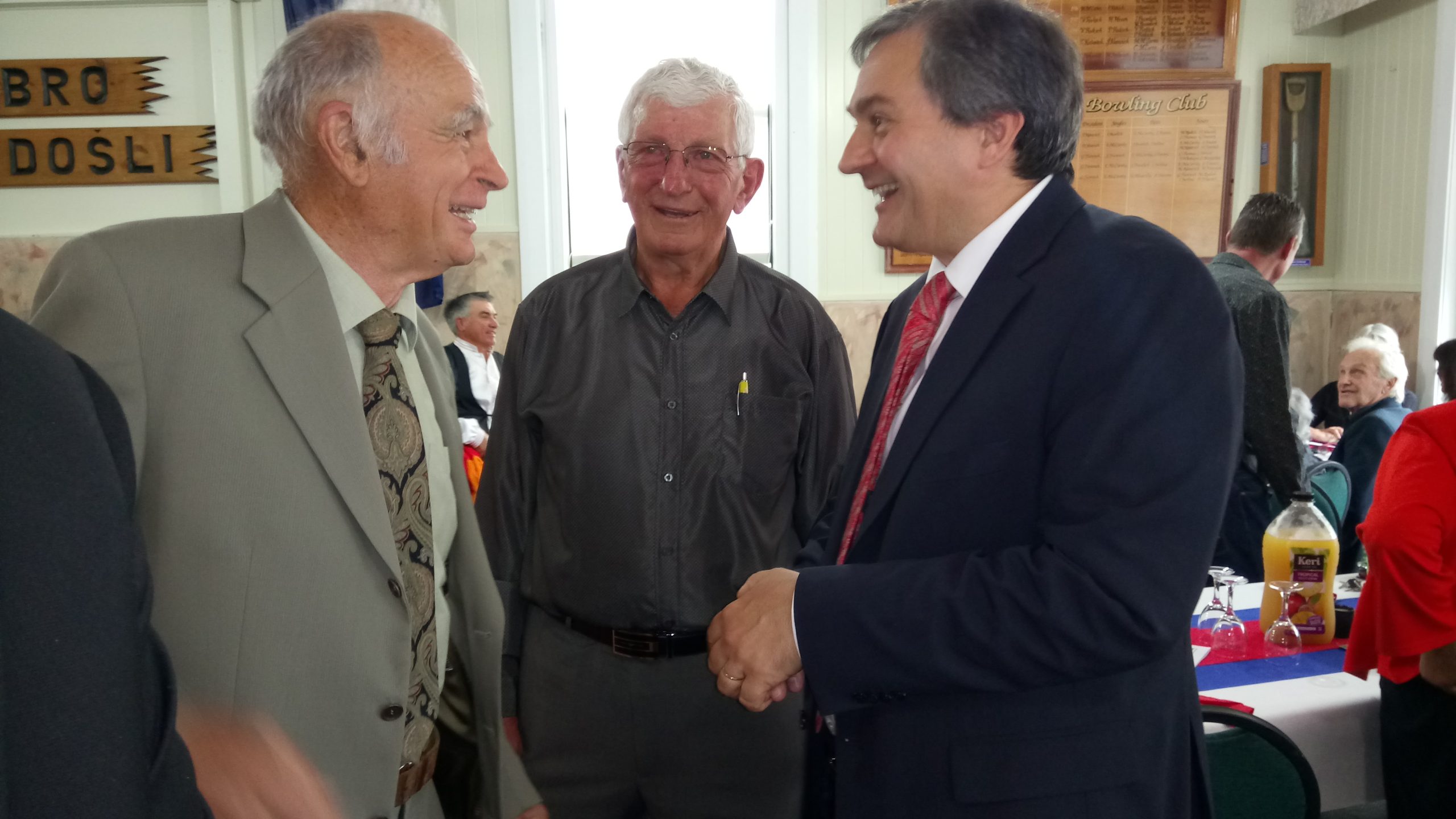 Dr. Kusin spoke of how impressed he was to see culture from our Croatian homeland being nurtured and respected in the Far North. He proposed that the club consider holding a celebration next year at Te Ahu, to commemorate 160 years of Croatian Settlement in New Zealand. He was very enthusiastic to see this event come to the Far North. 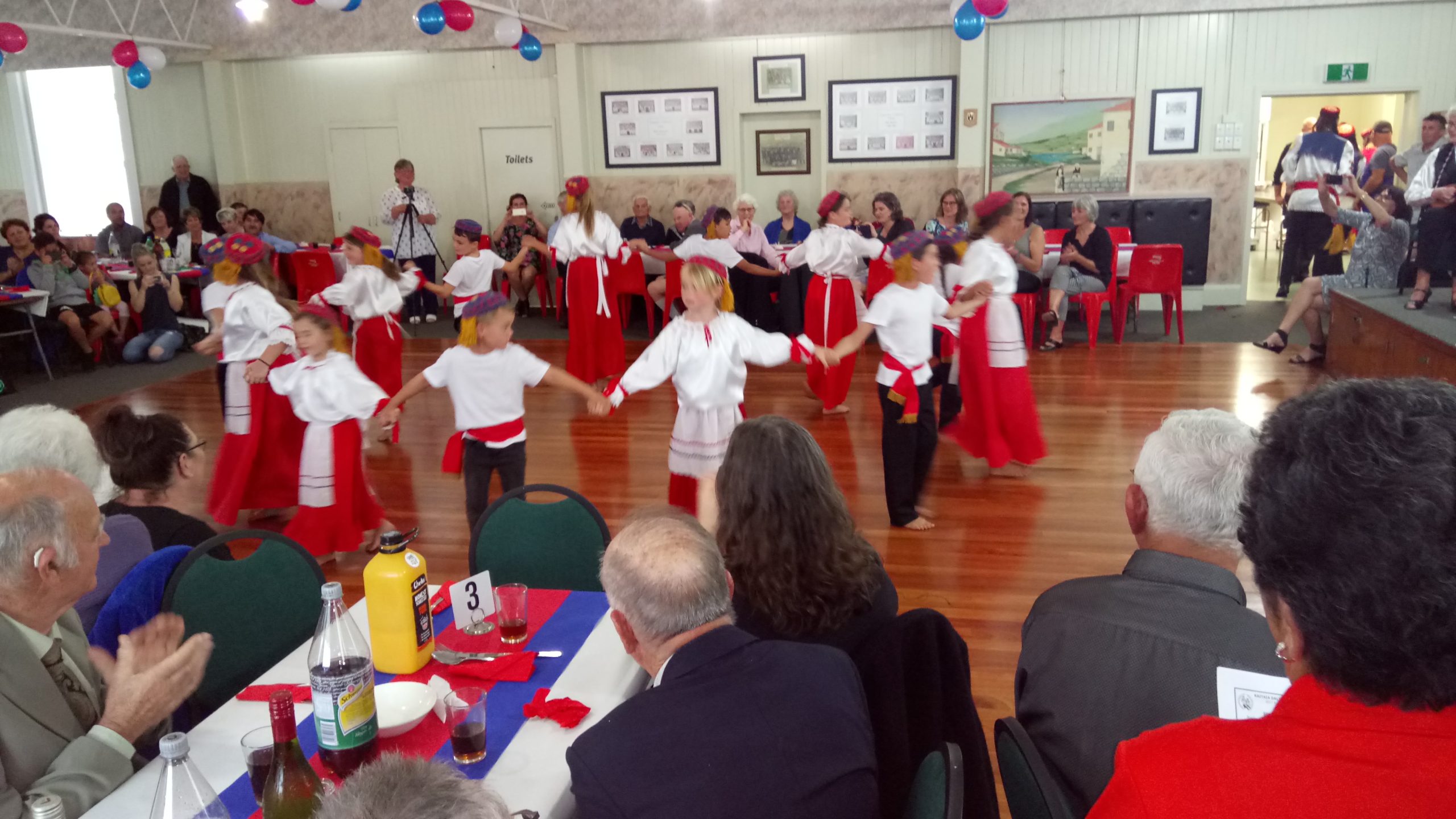 Members of the Kaitaia Dalmatian Cultural Club were very honoured to host the ambassador and show him some of the history of the area. Two following days Dr. Kusen spent sightseeing before returning to his base in Canberra, Australia.