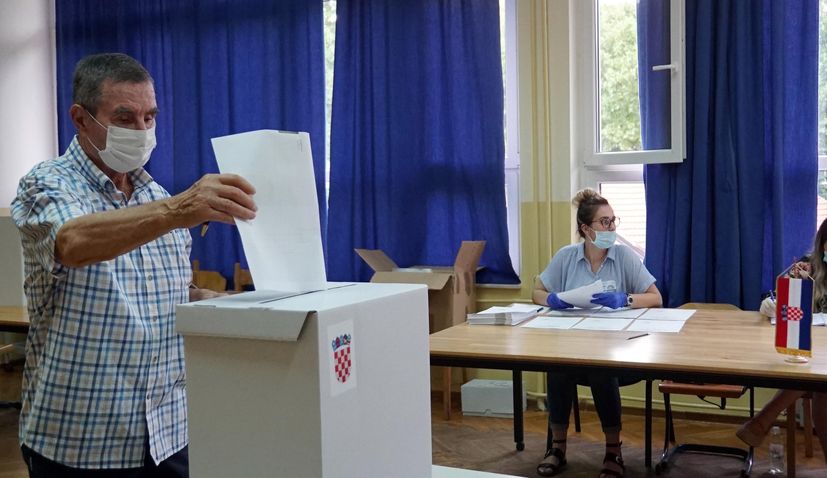 ZAGREB, July 5 (Hina) – More than 6,500 polling stations throughout Croatia were opened at 7 a.m. on Sunday morning for the election for the 10th national legislature, and they will be closed at 7 p.m.

Apart from voting in Croatia, also polling places are being set up for expat communities abroad.

Croatia’s tenth parliamentary election began at 11 p.m. on Friday Croatian time as polling stations opened in three Australian cities. The last polling station to open will be in Los Angeles at 4 p.m. on Saturday Croatian time. Almost 185,000 Croatians abroad have registered to vote in the election, the most in Mostar, Bosnia and Herzegovina (50,786).

Also, special polling stations are being organised for army personnel on duty, ship crews, as well as for beneficiaries of retirement homes and in prisons.

Around 75,000 poll workers are being engaged in the organisation of the elections, which will be observed by around 8,500 monitors.

They all have to comply with measures introduced to prevent the spread of the coronavirus. Members of polling committees will have to keep a distance of 1.5 metres from one another and wear face masks. It has been recommended that they wear gloves as well and regularly disinfect their hands.

These elections are being organised against a backdrop of the COVID-19 epidemic, and currently, there are 830 people diagnosed with this infection in the country.

They are enabled to vote by proxy, and some 30 of them have applied for this form of voting, whereby they will be able to vote with the help of another person of their confidence, who will fill in the ballot as instructed by the infected person. After a call from a COVID positive person, a member of the polling committee will come in front of their house or apartment, without coming into direct contact with the infected person. The person of confidence will then fill in the ballot, put it in an envelope and return it to the member of the polling committee outside the apartment.

The State Electoral Commission (DIP) stated on Friday that out of more than 4,000 people currently in self-isolation after being in contact with COVID-19 positive cases, and 476 of them had applied for voting in Sunday’s parliamentary elections. This means that 10% of the self-isolated persons have applied for voting.

DIP recently called on voters in self-isolation wishing to vote to contact their local electoral commission by 2 July and apply to vote. Rules for voting for persons in self-isolation are the same as those for illiterate persons, bed-ridden patients, blind or disabled persons – they have to report to the competent polling committee three days before election day at the earliest.

Deputies are elected according to proportional representation with the possibility of preferential voting. Voters can circle the name of the candidate whom they prefer to all the other candidates on a slate. Preferential votes count only if a candidate on a slate wins at least 10% of the votes won by their slate.

The standard d’Hondt formula is applied to the vote except for the twelfth constituency in which national minority representatives are elected, with a five-percent election threshold in each constituency.

Preliminary election results will be published on DIP’s website, beginning at 9 p.m. Sunday, and they will be updated every 15 minutes.

Information on the turnout will be published at noon and at 5 p.m. Sunday.