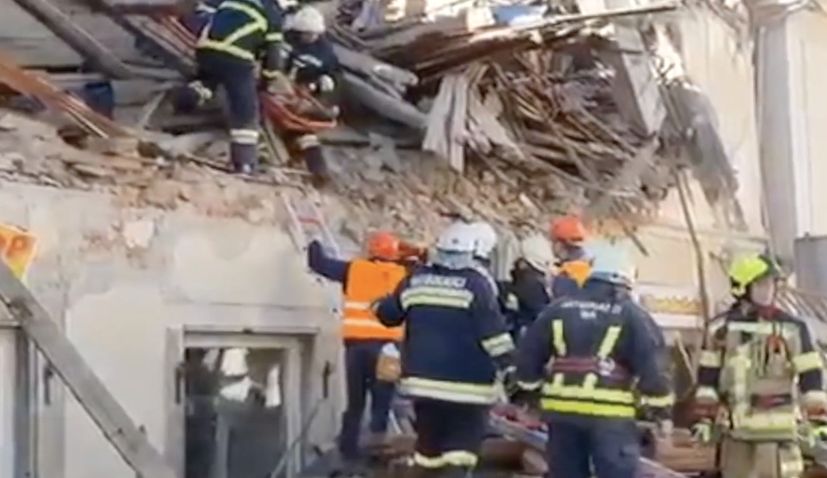 ZAGREB, Dec 29 (Hina) – The head of Croatia’s Seismological Survey, Ines Ivancic, said on Tuesday that many weaker aftershocks ensured after a magnitude 6.2 earthquake that struck Petrinja at 12.19 a.m. today.

“After the strong 6.2 earthquake, numerous tremors have been felt, practically one after the other… 20 or more.”

Ivancic said whether aftershocks would be stronger could never be predicted with certainty.

“Now that such a strong earthquake happened, any stronger earthquake that might happen, which need not be stronger than this one, could cause even greater damage to damaged buildings.”

Ivancic said aftershocks could occur over a long time, certainly one to two years.

The police have confirmed that one child was killed and they are still waiting for information on how many people have suffered injuries and the damage caused to buildings.

A thirteen-year-old child was killed in Petrinja, the police said.

According to unofficial sources, the child is a girl.

For now there is no official information regarding injuries, however, it is expected to be available soon.

Plenkovic in Petrinja: This is a tragedy, all services deployed to Petrinja

Prime Minister Andrej Plenkovic on Tuesday said that all the relevant services have been deployed to Petrinja and Sisak-Moslavina County to help local residents, adding that Petrinja needs to be evacuated.

“The army is here and the police, civil protection, firefighters, emergency medical services are arriving, the mountain rescue service from Split will be coming, military helicopters have gone to collect them,” Plenkovic told reporters in Petrinja where he arrived after hearing of the devastating earthquake that struck the town at 12.20 on Tuesday.

He added that alternative accommodation needs whose houses have been destroyed.

“Containers will be delivered so that we can move the people off the streets and move them out of Petrinja because it’s not safe to be here, said Plenkovic.

According to the latest information a young girl was killed in the quake.

President Zoran Milanovic said that the local barracks could take in several hundred people in need of accommodation and that the town would be rebuilt with European funds.

“This is horrible. It’s been a difficult year, terrible. This is like adding insult to injury. The town will be rebuilt. A child’s life has been lost,” the president told press while touring Petrinja.

He voiced hope that there will not be many victims. But, he said, even one life is too much because we have suffered a lot in the past 30 years.

“This town is impoverished. Here are buildings built… 150 years ago. A huge amount of money will be needed. The money will be found,” Milanovic said, adding that Slovenian President Borut Pahor had called him.

Responding to questions, he said he was not worried that Croatia might not get enough money, adding that Albania managed to draw over €1 billion after last year’s devastating quake.

“The town will be rebuilt, but no one will be able to compensate for people’s emotional and spiritual damage.”

The president said old and dilapidated buildings in Zagreb should be either renovated or demolished.

Interior Minister Davor Bozanovic said on Tuesday in Petrinja that Croatia had launched the European Alert Mechanism and expects equipment to start arriving very quickly which will be more than welcome in this situation.

“I just spoke with the European Commissioner for Crisis Management, an entire series of countries have already offered their assistance and at the EU level help is being organised for everything that is most needed at the moment,” Bozinovic told N1 television in Petrinja.

He said that the alert mechanism has been launched and that he is certain that all the necessary equipment will start arriving soon that is welcome in this situation.

He explained that the civil protection has its own capacities but that considering that many of them are engaged in the coronavirus crisis and dispersed in hospitals, additional capacities are necessary.

He said that the police is always here when Croatian citizens needs them and have been engaged from the very start, when the first tremor occurred yesterday.

All police forces in Sisak-Moslavina County are out in the field and they have been joined by other police administrations, particularly from Zagreb. They are helping organise traffic and hotspots. They are being accompanied by civil protection units and interventionary forces.

Croatian military personnel are helping residents of Petrinja in clearing up and repairing the damage, the Defence Ministry said.

“Our hearts go out to Petrinja. Hang in there, the whole of Croatia is with you!” the Defence Ministry said.

The exact extent of the damage is not known as yet until the relevant services inspect the building.

Parliamentary staff were in the building when the earthquake with a magnitutde of 6.2 struck at 12.20 and were evacuated, the parliamentary media service reported.

Zagreb’s KB Sveti Duh hospital sustained damage in Tuesday’s earthquake, the situation was dramatic because some patients were in labour and surgeries were underway, and we are now 100% focused on taking care of patients, hospital director Mladen Busic told Hina.

Busic said that KB Sveti Duh hospital was ready to take patients from Sisak and they are waiting for information on that.

“The City of Zagreb and all of its health capacities will be maximally available to everyone in need of medical care,” he said.

There are no injured in the KBC Sestre Milosrdnice hospital, there is minor material damage, and most patients who left the building during the earthquake have returned to the hospital, Davor Vagic, advisor to the KBC’s director, told Hina.

The hospital’s buildings are still being checked, but according to available information the damage sustained is not significant, Vagic said.

As for the Arena Zagreb sports hall, which has been turned into an inpatient clinic for COVID patients, it is stable and the patients are safe, he added.

Vagic said that the KBC Sestre Milosrdnice was ready to help the rest of the hospital system as much as possible.

The hospital is also absolutely prepared to take patients from Sisak and Petrinja but a decision on that will be made by the national crisis response team and the Health Ministry, Vagic said.

Transport organised for hospital patients out of Petrinja

Health Minister Vili Beros said on Tuesday that transport had been organised for COVID patients from the hospital in Petrinja after the earthquake.

He said talks were under way with the heads of psychiatric institutions to take in 100 people from Petrinja.

The Clinical Hospital Centre Zagreb said it would admit about 40 COVID patients from the hospital in Sisak.

The Interior Ministry said on Tuesday that COVID e-passes introduced for travel between counties have been suspended and that police checkpoints around the country were being disbanded.

“The police throughout Croatia are disbanding checkpoints between counties. The e-passes system has been suspended,” the ministry said.

“Adhere to epidemiological measures, slow down while driving and don’t rush,” the ministry added.