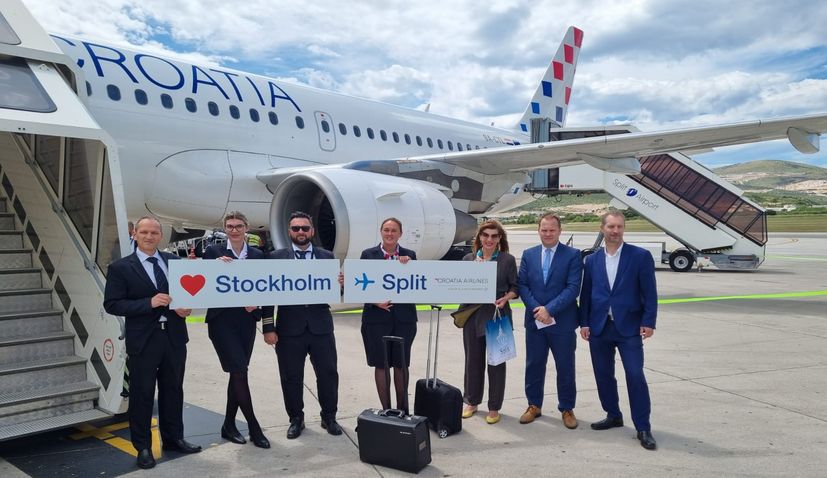 The ceremony, which marked this year’s expansion of the network of Croatia Airlines destinations from Split, was held after the landing of the aircraft on the first seasonal Stockholm – Split flight.

As of today, passengers have two flights a week on this international route – Fridays and Sundays, and return airline tickets are available for as little as 129 euros.

This afternoon, the first passengers on the new seasonal route Split – Bucharest, which will operate on Wednesdays and Fridays, took off on Croatia Airlines, and return airline tickets are available to passengers for as little as 149 euros.

“We are glad that we have offered passengers an even better choice of travel and expanded our network of European destinations. During this year’s season, we plan to connect Croatia with 21 international destinations, ie 22 European airports, and the aircraft will fly on 41 international routes. In that period, we plan to perform more than 16,000 flights and offer about 1,766,000 seats, which will make the national airline contribute to the quality of the Croatian tourist product and the improvement of the transport infrastructure of the Republic of Croatia,” said Slaven Žabo, Commercial Director of Croatia Airlines.

The fifth new line this season from Split will be introduced on June 14 this year. when the first flight Split – Amsterdam will take place. Flights on this route are planned on Tuesday, and return airline tickets are available to passengers for as little as 159 euros.

In addition, flights on the seasonal Split – Prague route, which was first introduced last year, are being renewed.