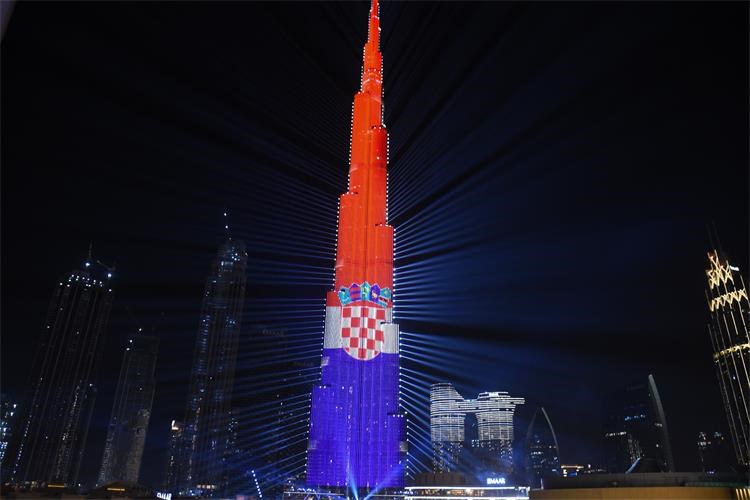 Burj Khalifa in Dubai in the colours of the Croatian flag (Photo: Vlada RH)

One of world’s tallest buildings, the Burj Khalifa in Dubai, has lit up in the colours of the Croatian flag on Saturday.

The lighting up of the Burj Khalifa was a gesture done by the locals after a visit from a Croatian delegation, led by Prime Minister Andrej Plenković.

“After meeting with the Prime Minister of the United Arab Emirates His Highness Sheikh Mohammed bin Rashid Al Maktoum and Crown Prince of the Emirate of Abu Dhabi, Mohammed bin Zayed al-Nahyan and the biggest investor Emaar Dubai – a nice gesture from the hosts with the Burj Khalifa lit up in Croatian colours,” Croatian PM Andrej Plenković said on Twitter.

The Croatian delegation also visited EXPO Dubai 2020 where the Croatian pavilion has been promoting the country for the past six months.

“Croatia – a country that inspires great minds, that is the message of Croatia at this world exhibition. I would like to thank everyone who worked hard in preparing the exhibition, and the past 6 months of the EXPO itself. Every day there are more and more visitors in our pavilion where they can get information about Croatia, see how a country rich in its history and tradition looks to the future. It is a synthesis of Croatia yesterday and Croatia tomorrow here at the EXPO,” said the Prime Minister, the government reported.

On Sunday Croatian National Day will be celebrated at the EXPO, as well as the National Day of the United States of America. Croatia will celebrate it with a cultural programme which will feature folk dances and songs by famous Croatian ensemble LADO.

This is the third time that the Burj Khalifa has lit up in the Croatian colours.

Back in June 2018, it lit up to pay homage to Croatia’s 3-0 win over Argentina in the 2018 World Cup and in 2019 in honour of the Croatian delegation, led by the mayor of Zagreb who arrived on a visit.