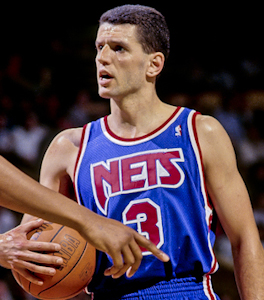 ŠIBENIK, 22 October 2020 – Croatian basketball great Dražen Petrović, who was widely recognised as the greatest player to ever come out of Europe, would have turned 56 today.

His hometown of Šibenik has once again paid tribute to the late great on his birthday today near his monument and court in the city.

“We remember one of the greatest sons of our city, an eternal inspiration, not only to athletes but to all of us because he was adorned with perseverance, optimism, and a legendary smile. He is the pride of our city, sports and I am sure we all remember him fondly. Captain, happy birthday to you,” said Rakić.

This was followed by the laying of wreaths in front of the Dražen monument and the traditional release of orange balloons into the air.

As part of the programme to mark the 56th anniversary of Dražen’s birth, on Saturday the fifth edition of the road athletics races ‘Šibenski deset’ and ‘Draženova četvorka’ will be held.