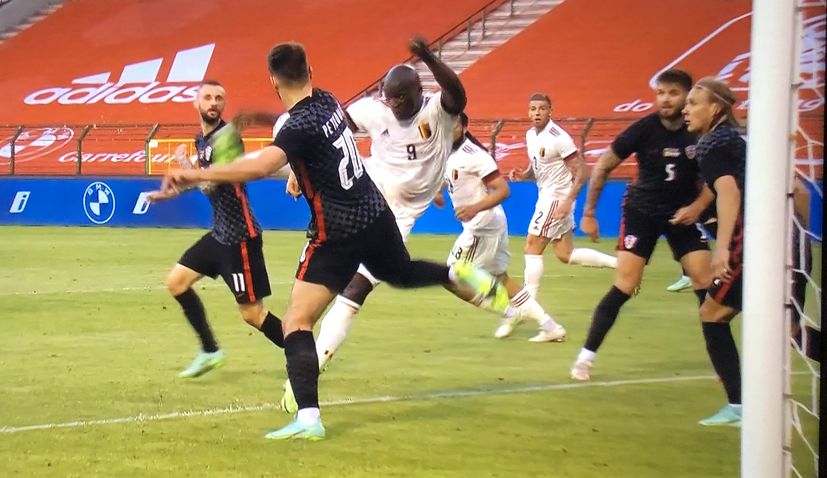 Romelu Lukaku finds the back of the net (Screenshot)

BRUSSELS, 6 June 2021 – A first half strike from Inter Milan’s Romelu Lukaku was enough to give Belgium a 1-0 victory over Croatia on Sunday night at King Baudouin Stadium in Brussels.

The match was the final warm up before Euro 2020 for both sides and gave coaches Roberto Martinez and Zlatko Dalić a chance to see where their sides were at.

Dalić, who said earlier in the week that he would treat the match as if it was the Euro opener against England, gave Chelsea’s Mateo Kovačić a start ahead of Nikola Vlašić and also preferred Bruno Petković as the lone striker with Andrej Kramarić starting on the bench.

Belgium were without stars Eden Hazard, who came on late in the game, and Kevin De Bruyne.

Croatia started urgently and looked good in the opening quarter, controlling possession and putting passes together nicely in the midfield with Kovačić looking particularly good.

The hosts started to get into the game more as the half went on and almost took the lead after half an hour but were  denied by the cross bar twice, first after a Lukaku shot, then from the follow up header from Carrasco.

Belgium would take the lead in the 38th minute when Lukaku volleyed home after a goalmouth scramble where Croatia failed to clear.

Trailing 1-0 at the break, Dalić would hand a debut to Joško Gvardiol, bringing on the talented 19-year-old defender for Borna Barišić at left back and the visitors would start the second half much like the first, looking urgent, but in the final third they lacked the clinical pass.

Croatia would make a number of the changes in the final half hour, with Kramarić, Vlašić, Brekako and Pašalić coming on for Modrić, Kovačić, Petković and Rebić.

Dominik Livaković would deny Lukaku in the final minutes with a great save from close range header and his follow-up. Brekalo then had a shot well saved in injury time and the match would end 1-0.

Dalić would have been happy with the amount of possession his side enjoyed in the match, and also the form of Modrić and Kovačić in the middle of the park. Modrić had another impressive game, and Kovačić also was very good today.

There will be some concerns, however, in not creating opportunities when in possession, which has been a problem for the Vatreni for a while now. Belgium keeper Thibaut Courtois was not tested as Croatia failed to have a shot on target until deep in the match.

Croatia now heads to Euro where they will play their opener next Sunday against England at Wembley.