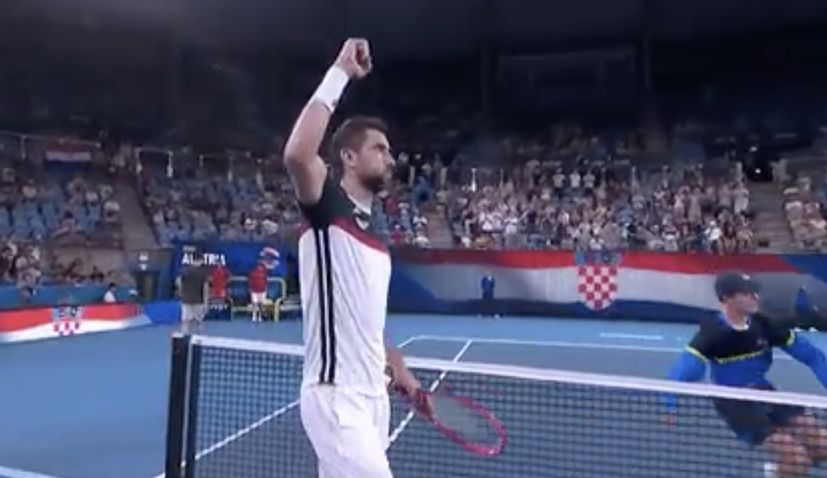 SYDNEY, 4 January 2020 – Croatia has won their opening match at the inaugural $21 million ATP Cup which is taking place in Australia from 3-12 January.

Croatia opened their Group E match against Austria at the Ken Rosewall Arena in Sydney with a 3-0 victory thanks to fantastic displays in the extreme heat by Marin Cilic and Borna Coric in the singles, and Ivan Dodig and Nikola Mektic in the doubles rubber.

Cilic gave Croatia a 1-0 lead when he came from behind to beat Dennis Novak in three sets after two hours and 27 minutes on court.

The first set would be tightly contested and would be decided in a tie-break which would go the way of the 26-year-old Austrian 7-4. Cilic would get back into the match with a crucial break in the 9th game of the second set to go 5-4 up. He would hold serve to win the set 6-4.

Novak was testing Cilic but the Croatian would be the first to break when the scores were locked at 3-3. He would hold serve for the remainder of the set to close out the match 6-7, 6-4, 6-4 with an ace.

Borna Coric was next on court against world no.4 Dominic Thiem and the Croatian would start with a break in the opening game of the match. Thiem would break back to level at 2-2 and then both players would hold to send the set into a tie-break which would go Coric’s way 7-4.

Seriously good tennis from the Croatian No.1 🙌

Thiem broke immediately at the start of the second set and would break again to comfortably take the second set 6-2 to force the match into a decider.

Lifted by the crowd, Coric dug deep and managed to break Them to race out to a 3-1 lead. Coric kept his composure to take an enthralling match 7-6, 2-6, 6-3 to give Croatia an unassailable 2-0 lead with just the doubles match left to play.

Dodig and Mektic then made it 3-0 with a 7-6 (4), 6-2 victory over the Austrian pairing of Oliver Marach and Juergen Melzer.

Croatia next plays Poland on 6 January (10:00 am) and will play their final group match against Argentina on 8 January (5:30 pm). All matches will be played at the Ken Rosewall Arena in Sydney.

The winner from each group will be joined by the two best second places in the quarterfinals of the tournament for three knock-out rounds until a champion team is crowned.