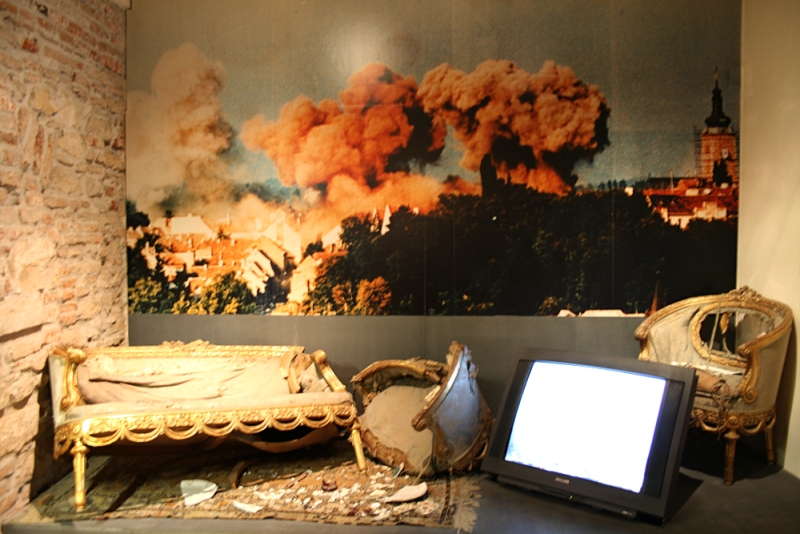 A photograph by Hrvoje Knez showing the rising smoke after the explosion  as well as items inside at the time which is exhibited in the Museum of the City of Zagreb (Photo credit: Roberta. F/CC BY-SA 3.0)

ZAGREB, Oct 7 (Hina) – Prime Minister Andrej Plenkovic on Wednesday placed a laurel wreath on a memorial plaque on the government building to mark the 29th anniversary of its shelling, saying it was a watershed moment as that night parliament voted for independence and severed all ties with Yugoslavia.

Speaking to the press, he said that on 7 October 1991 Yugoslav People’s Army (JNA planes tried to kill President Franjo Tudjman, the then Croatian leadership and representatives of Croatia in the then still federal institutions.

That was a watershed moment because that night the Croatian parliament voted for independence and severed all constitutional ties with the former state formally as well, after the decision of 25 June 1991, he added.

“That’s why it’s important that we remember both this day and the victim killed then as well as the Croatian parliament’s memorial day tomorrow because that was one of the most crucial decisions which were adopted in special circumstances in (oil company) INA’s basement 29 years ago.”

In the afternoon of 7 October 1991, JNA planes shelled and severely damaged the government building, which at that time was also the official residence of Croatia’s first president, Franjo Tudjman, who was inside.

One person was killed in the attack and four were injured.

October 1991 marked the end of a three-month European Community moratorium on the Croatian parliament’s decision on independence and sovereignty from the previous June. The European Community was confident the Yugoslav crisis and the Serbian military aggression could be resolved peacefully, so it had asked Croatia to delay the decision.

On October 8, the first Croatian parliament adopted the historic decision on Croatia’s independence. The decision was not adopted in the parliament building but at a session in INA’s building.