Home » News » A student’s return to her Croatian roots

Can you imagine studying at an American college in one of the most beautiful cities in Europe? RIT Croatia offers just that in Dubrovnik, in the very south of Croatia, and in the country’s capital, Zagreb.

Dubrovnik is a destination that delights visitors at first sight. The combination of the beautiful Adriatic Sea, the enchanting landscape, and the magnificent architecture can never leave you indifferent. The stunning city of Dubrovnik, with its historic Old Town, became a UNESCO World Heritage Site in 1979. 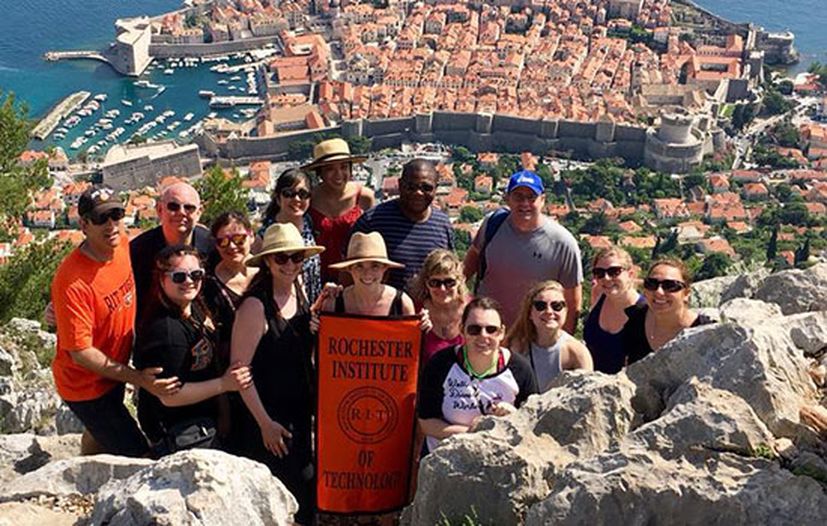 The RIT Croatia campus in Dubrovnik is located near Dubrovnik’s Old Town at Don Frana Bulića 6. The campus building houses local and international students, staff, and faculty. One of them is Sabina Wallace, a 22-year-old student from the USA.

While Sabina is from the San Francisco Bay Area, her mom is originally from Dugi Otok. Her mother always wanted Sabina and her brother to feel connected to her Croatian roots, so she made sure they went on their yearly trip to visit Croatia. Sabina’s brother was the first in their family to move back to Croatia. He is an alumnus of the RIT Croatia campus in Zagreb. After some of her family members moved back to Croatia to enjoy a slower-paced lifestyle, Sabina chose the RIT Croatia campus in Dubrovnik as her next destination because of the unique opportunity to study in English and get both a Croatian and American degree. When asked about what the best part of growing up in a multicultural family is, Sabina said:

“Growing up in an American-Croatian household was always exciting- and loud- but full of a lot of love, laughter, and good food. I danced Croatian folk dance or ‘kolo’ for a few years as a child, which was a really fun experience. Overall, having a multicultural upbringing has shaped me into a better and more open-minded person. I feel thankful to my mom for ensuring I am connected to my Croatian heritage.” 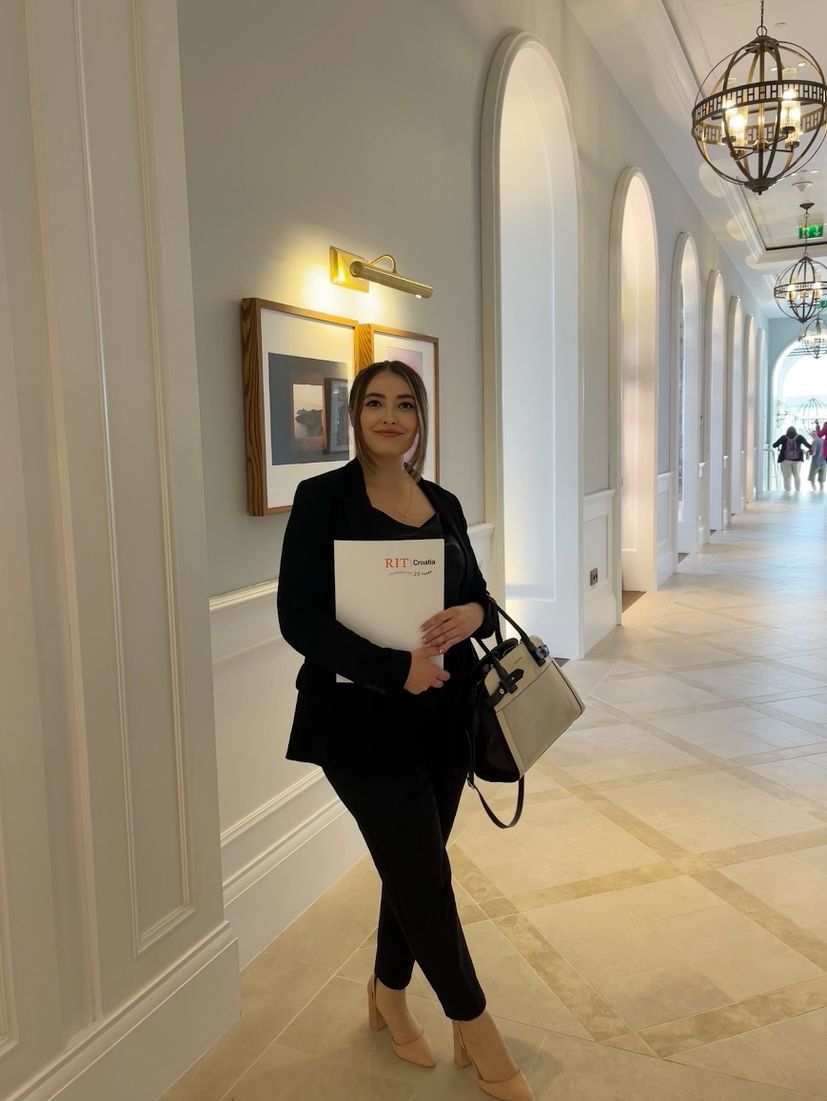 Living and studying in Dubrovnik

Sabina quickly caught up with Croatian social traditions – some of the best times she has had in Dubrovnik are sitting with friends and chatting over coffee. As she said, it’s one of those activities you can do for hours without realizing how much time has passed. During her summers, she traveled to some of the most beautiful Croatian islands – Lokrum and Korčula. 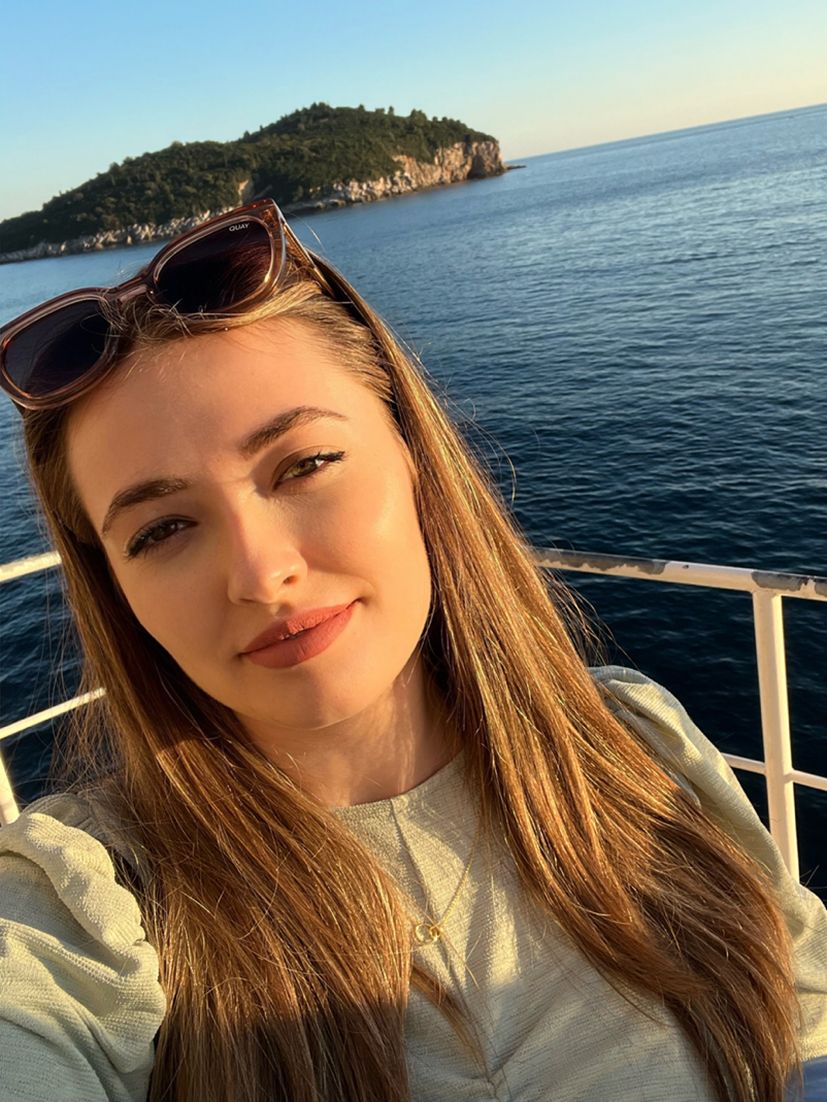 Sabina enjoying a boat ride on the Adriatic Sea

When asked about the student life in Dubrovnik, Sabina said:

“All of the classes and professors at RIT in Dubrovnik are extremely helpful and engaging, and I look forward to lectures. If I have a break between classes, I’ll sit and get coffee with my friends and catch up. After classes, I head to the student dormitories, get dinner at Menza (student cafeteria), and hang out with my friends. Afterward, I head home and study on my balcony, which has a beautiful view of the hillside of Dubrovnik. Student life is very relaxing and slow-paced here.”

Speaking from her own experience, Sabina identifies the main differences between studying in the United States versus in Croatia:

„The greatest differences are in the sizes of American college campuses and the student body, and the size of RIT Croatia. Our class sizes are pretty small and everyone knows each other. It’s more of an individualized experience and this establishes more trust between students as well as faculty.“

Thinking of studying or living in Croatia?

After living and studying in Dubrovnik for four years, Sabina had this advice to give to people thinking about moving to Croatia and enrolling at RIT Croatia:

“It’s a tight-knit community, and people know each other, and that sense of community runs deep. It is part of the culture to look after others, and that’s why I believe it is so safe. Studying at RIT Croatia is a unique experience, and I grew a lot as a person over these four years. If you want to learn in Europe and get an American degree, it is worth it. I wish I had known that before coming that there is an adjustment period and some homesickness at first, but with good friends around, you can get through it.”

„RIT provides its students with a lot of job opportunities within Croatia, the EU, and the US, which gives students the ability to experience new cultures and find the perfect job and industry for them.“

About RIT Croatia
RIT Croatia (formerly known as ACMT) has been delivering top American degree programs in Croatia since 1997. With its two campuses, in Dubrovnik and Zagreb, this is the only US college in the country and it is the only institution for higher education granting two diplomas to its students – an American diploma, awarded by RIT, and a Croatian diploma, awarded by RIT Croatia. RIT Croatia graduates work all over the world. International students come from all over the world; a lot of them come from the main campus from Rochester, as well as from Croatian Diaspora communities in cities such as San Jose, San Pedro, Los Angeles, Chicago, Boston, New York, Toronto, Mississauga, Cleveland, and many more. For more information, contact [email protected]