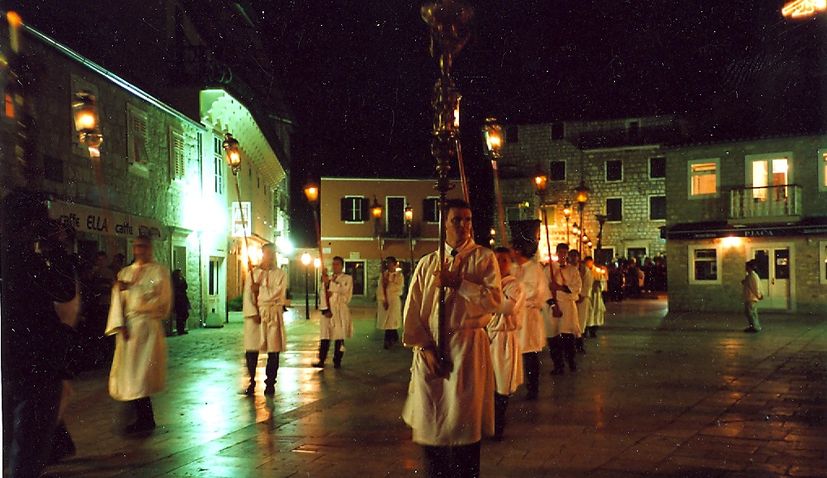 29 March 2021 – The Croatian island of Hvar will once again celebrate the unique religious Easter tradition that has taken place uninterrupted for nearly 500 hundred years.

The UNESCO-protected Za Križen (Following the Cross) has been maintained by believers in the small towns and villages in the central part of the island and for the second year in a row the historic Procession will be held under strict epidemiological conditions.

Last year the COVID-19 pandemic meant only a limited number of people were able to take part in the tradition and follow the cross and it will be the same this year.

“The numbers taking part will be strictly limited as laid down by the Croatian National Authority for Civil Defence, and there will be penalties if they are exceeded, so please do not try to ‘gatecrash’,” the Jelsa Tourist Board said.

The Procession will be live-streamed on: LIVECAMJELSA

The tradition in normal times

After mass on Maundy Thursday before Easter, six villages on Hvar – Vrboska, Jelsa, Pitve, Vrisnik, Svirče and Vrbanj – send out a group that will proceed through the other villages in a circle carrying a veiled wooden cross weighing at least 12 kilograms, covering twenty-five kilometres in eight hours before returning home.

Each party in the procession is led by a cross-bearer who walks barefoot or in socks, never resting and to make it more difficult, the cross must not touch the ground during the Procession, except when it is placed on a stand in a church.

The procession lasts all night and returns to its home church in the morning. It is perhaps the most prominent part of the procession, as locals gather in front of the church to welcome the sacred cross and the physically tired, but spiritually rejuvenated people who, carried by a divine energy, sing from their throats.

Each of the six processions has its own traditions, for example in Vrbanje, it is customary that the Procession visits the cemetery to pay tribute to all who have passed away and can no longer participate in the Procession.

In Jelsa, a special ceremony (Primopredaja Križa) usually takes place before the event where the cross is handed over from last year’s Cross-Bearer to the new one.

The Procession usually ends around 7 or 8am on Good Friday. As Good Friday is a fasting day, traditionally Bakalar (dried cod) is prepared. Before one goes to bed, it is customary to drop by the Cross-Bearers’ house for a portion.

Za Križen a long-established and inalienable part of Hvar’s religious and cultural identity and the procession connects communities of the island to each other and to the Catholic community around the world.

The Cross-Bearer’s entourage under normal conditions might consist of anything up to 50 people but this year only a few will be allowed.

Following the Cross has been listed on the UNESCO list of protected non-material heritage, which is a great acknowledgment for the island of Hvar, which has a total of three sights on this list, and also Croatia.